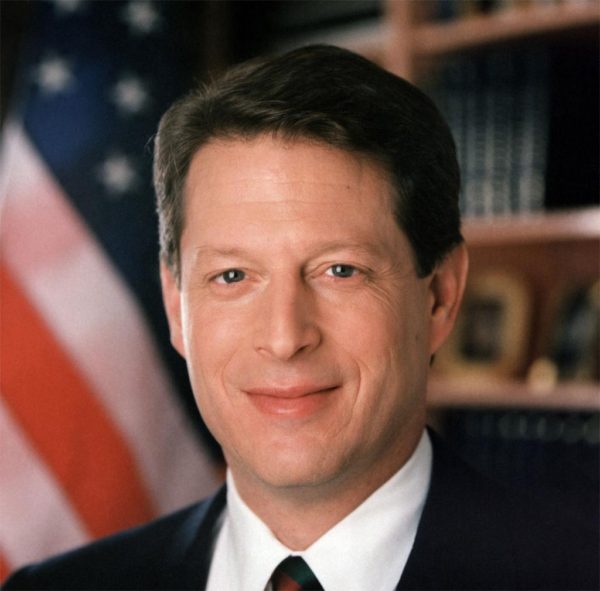 Even Blessed Gaia suffers from supperating zits on her sweet, terrestrial buttocks. None represents more accurately this bloat of oil, bacteria and other subcutaneous waste products than Albert Gore, Jr. He emits IR-absorbing GHGs below.

â€œThe abolition of slavery, womanâ€™s suffrage and womenâ€™s rights, the civil rights movement and the anti apartheid movement in South Africa, the movement to stop the toxic phase of nuclear arms race and more recently the gay rights movement,â€ Gore said. â€œAll these movements have one thing in common. they were all met with ferocious resistance,â€ Gore said on July 13th during his talk to the conference in Melbourne. Other speakers at the summit tied climate â€œsolutionsâ€ to social causes. Climate activists admitted that â€œCarbon Neutralâ€ goals were being used to achieve â€œgender & social equity.â€

If “Ferocious Resistance” equals Dad , Junior truly has a deep point about that Civil Rights Era stuff. Not that anyone getting their phone boosted on the BART really cares whether DR3 is true or not, but it demonstrates the extent to which Al Gore is filled with intestinal emissions of Sulfur Dioxide and Methane. Naomi Klein explains the real point of The Climate Change Movement.

Author Naomi Klein, author of the new book â€œThis Changes Everything: Capitalism vs. The Climateâ€, admitted during the 2014 Peopleâ€™s Climate March in New York City activists would be caling for the same â€œsolutionsâ€ even if there was no climate â€œcrisis.â€ She was asked, â€œEven if climate change issue did not exist, you would be calling for same structural changes?â€ Klein responded: â€˜Yeah.â€™ Following the panel, Climate Depot asked Klein if she would support all the same climate â€œsolutionsâ€ even if the science was wrong. â€œYes, I would still be for social justice even if there was not climate change. Yes, you caught me Marc,â€ Klein answered sarcastically as she abruptly ended the interview. Klein told the activists she recommended â€œweaving this [climate] movement into all of our movements.â€

Modern Environmentalism has forgotten Deep Ecology, but still remains all about solutions. The problem it solves now is how to keep Red Diaper Babies relevant after the whole Holodomor/Khmer Rouge chic went sideways in the late 1980s and early 1990s. The Berlin Wall fell and China opened more completely to the West. Maybe ten years later, Mann and Briffa were fabricating Hockey Stick Curves and Al Gore, Jr was all aboard the scam train the same time he flew aboard Kenneth Lay’s corporate jets. Just 537 more votes in Florida, and Gore would have ridden The Piltdown Man of Geophysics straight into the White House.

So environmentalism has become a career ladder for the sophisticated, amoral sort of bro that can be found by The National Enquirer generating bastards with groupies while his wife dies of cancer. But the planet remains in peril. Woe betides the verdant forest of our forefathers that these liver flukes of psuedo-scientific litigation would no more seek to acknowledge than they would their various “outside children.”

Our current ecological state is one that is imperiled by a vicious cycle of democratic nations that vote themselves free beer and third world populations that go full-metal r-strategy when it comes to reproduction and then traipse across open borders to befoul places they care nothing for. The best in the world breed below replacement, the worst are filled with a passionate fecundity. The consumerist flood of cheap, disposable junk fills our landscape with a level of garbage commensurate with what gets left behind by a typical Earthpeace demonstration.

And this garbage hides the verdant joy of the landscape the way our officially sanctioned narratives hide the true problem we face with our environment. I call it The Michelob Delusion: the false belief that we can really have it all. A politics that genuinely protected would be a politics of stewardship, cost-benefit analysis and limitations on how much we could acquire via the labor of others. It would make you earn, save, reinvest and work for every toy or bauble you acquired. Then you’d have to own, maintain and keep track of all that crap or else.

The Michelob Delusion then causes The Nevada Problem. This can be summed as follows: Any place that considers it a state of emergency when the stoners can’t get their supply of chronic will have a dead environment until the stoners do the planet a favor and fatally OD. You cannot promise your entire population the moon and expect your ecology to not rapidly deplete. We cannot all haz cheeburger everyday. Claiming that these problems are all global warming’s fault and throwing a trash-strewn climate march to make it stop is not going to make anything unpleasant cease from being inevitable.

Expecting Al Gore to save the environment is about as stupid as expecting Swirl Activists and Cuckservatives to end racial division. Just as nothing could improve race relations in The United States of America faster than debunking any philosophical gravamen left under Cuckservatism and reestablishing De Facto and De Jure Freedom of Association, nothing would be more Carbon Neutral than Al Gore taking a dirt nap.

Between Cuck and Sperg | Trump Administration Begins Deportation Of The Irish