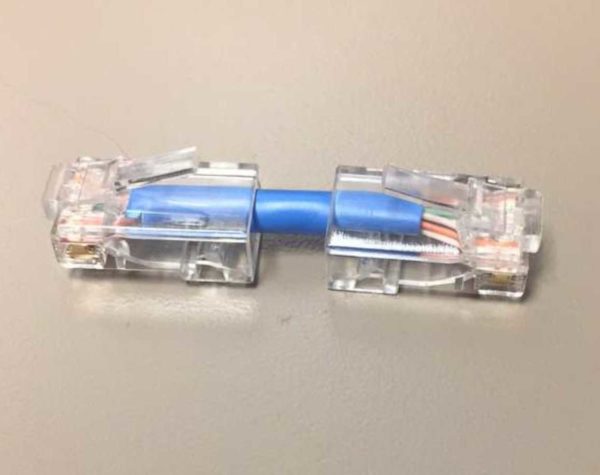 A Leftist society follows the news cycles of a monkey house: one monkey hops out, usually a small one with a grudge, dragging his arm or tail and pointing at whoever — usually someone with something he wants — hurt him. The rest are expected to show that they are Good Citizens by ganging up on the whoever and smashing them with rocks until they give up whatever is wanted, which is then shared equally among the passive-aggressive raiders.

We see this pattern time and again. The Salem witch hunts. The French Revolution. The mau-mauing of Black Lives Matter and the Ferguson riots. Even the election of Barack Obama. The Left hides behind victimhood as a way to victimize, which when you think about it, is an effective strategy of both shielding oneself and attacking at the same time. Only social pretense keeps us from seeing what it is.

Right now, the screaming monkey is pointing at a big sign on the horizon that says NET NEUTRALITY. All of the good monkeys are expected to screech and howl about this until they get their way, sort of like children on a road trip who see an ice cream stand, and their strategy is to increase the volume until they induce panic in the good sheep-monkeys out there, who will then beg their husbands to stop and buy ice cream just so they can have some peace and quiet (because they get these headaches, you see, which happens whenever they are confronted with a difficult decision or some specter of the past that they cannot quiet).

The only problem is that net neutrality is the opposite of how it appears. The sheep think it means they will not get charged extra for special services; what it really means is that they will get charged more and only get those special services, namely the big internet social media and entertainment sites. “Net Neutrality” is the agenda of the monopolist, not the little guy.

If the monopolists get their “net neutrality,” this is what will happen:

Notice that you have heard none of this in the media. That is not a coincidence: the media exists to fan the monkeys into a panic of rage because that is when the monkeys consume media 24-7 and are easily influenced by altruistic “good guy” gestures from advertisers, who right now are stumbling all over themselves trying to submit the latest gushing paean to net neutrality.

On to the gory details… As mentioned before, the real problem is lack of competition brought on by the high cost of not just laying cable, but getting past all those pesky local regulations that politicians (now retired) cooked up to “protect” you from the evil cable and telephone companies.

When you look at the costs involved, it is no surprise that American internet access lags behind most of the developed world. It is brutally expensive to set up a network, much of which is local regulatory and red tape costs:

Most importantly, installing fibertoptic cable is expensive â€” just laying down Fiber in Kansas City cost $84 million for 149,000 homes… and that was before even connecting the cables to the houses. One estimate pegs “nationwide deployment” at $140 billion, which would wipe out even Apple’s big pile of cash reserves. Just another 20 million homes would cost $11 billion, according to other research.

The problem here is the lines to the homes which create a de facto monopoly situation. Most Americans get access through one of two methods, ISDN or cable, because those lines already exist. Running new lines is expensive because of the permissions, fees, regulations, lawyers, negotiations, and other boring stuff involved; the actual physical running of the lines is not that big of a deal, although it is harder now than in the underbuilt 1970s.

Understanding this situation requires we take a bit of a trip down memory lane. Remember before cellular phones? Way back in the early 1980s and late 1970s, most Americans paid a monopoly named Bell Telephone for both telephone service and monthly phone rental. This was set up this way to avoid having a whole bunch of companies run different lines, basically granting one firm an exclusive license in order to avoid the chaos that market competition brings.

Enter Judge Green who decided that “Ma Bell” was a monopoly, and it should be broken up. He splits up the company into regional “Baby Bells,” which raises costs because now each one must hire its own staff to do what Ma Bell’s national staff did, and then spends years administrating this through court oversight.

Ultimately, what altered the situation was this: new firms, like MCI, rose up to offer long-distance communications through local numbers you dialed up using your regular Bell phone lines. These created competition for long-distance lines, and eroded dominance of the Bells, at which point the market fragmented without having to run new local lines.

While that was positive, the downside is that most of us are using 1970s or 1960s copper phone lines, including for our ISDN (“DSL”) access. There was no need to upgrade the lines, since competition was concerned with where the real money was, which was in long distance. But then that went away, thanks to cellular, and competition has now shifted to the digital realm.

This is why FCC chairman Ajit Pai prefers competition to regulation. In an ideal world, competition will produce new options, and regulation will ensure that basics like phone lines get updated every twenty years instead of once a century:

The FCC is not completely evacuating its oversight role. ISPs, he says, will need to be completely transparent with customers about all practices related to prioritizing traffic, data caps, and more. Pai believes that market competition for customers will prove far more effective in developing better and cheaper services than regulators deciding what is best for the sector. “In wireless,” he says, “there’s very intense competitionâ€”you have four national carriers and any number of regional carriers competing to provide 4G LTE, and a number of different services. In those marketplaces where there’s not as much competition as we’d like to see, to me at least, the solution isn’t to preemptively regulate as if it were a monopoly, as if we’re dealing with ‘Ma Bell,’ but to promote more competition.”

This form of light regulation allows the market to be the growing edge of the industry, and government to give these firms a plausible excuses to spend on infrastructure, because if it is a regulation, they can deduct it without fear of an audit.

The answer is twofold. First, industry already has its own solution to the neutrality issue, which is “fast lanes.” Second, regulation raises costs, which protects big companies from new companies entering the market, although as we have seen above, what consumers really need is more ISPs and more options to Facebook and Netflix in order to keep those companies honest. Inversion again.

Today, privileged companiesâ€”including Google, Facebook, and Netflixâ€”already benefit from what are essentially internet fast lanes, and this has been the case for years. Such web giantsâ€”and othersâ€”now have direct connections to big ISPs like Comcast and Verizon, and they run dedicated computer servers deep inside these ISPs. In technical lingo, these are known as â€œpeering connectionsâ€ and â€œcontent delivery servers,â€ and theyâ€™re a vital part of the way the internet works.

“Net Neutrality” legislation is designed to avoid regulating the fast lanes. Every site will be equal… in mediocrity… except for those that pay the toll, and they get faster service. The sheep will get their Facebook and Apple at high speed, and Wikipedia no doubt, but all those small sites which might compete with the big sites will be squeezed out.

This achieves the aims of the monopolists, not the consumer. They raise costs so that fewer people can compete with them; they get protection for their “fast lanes,” which is how they are going to exclude the little guys. The average voter, fixated on the idea of being charged a special price for those fast lanes, misses the parallax, which is that accelerating some sites means that others remain at slower speeds.

Democracy normally chooses idiocy. The net did not have “net neutrality” rules until 2015, mainly because back in 1987 when the net was made commercial, the decision was made to allow firms to manage their own sites as they saw fit, which naturally meant an un-neutral net. However, that actually helped the little guy and the consumer. “Net neutrality” simply exploits them, and neuters the net.