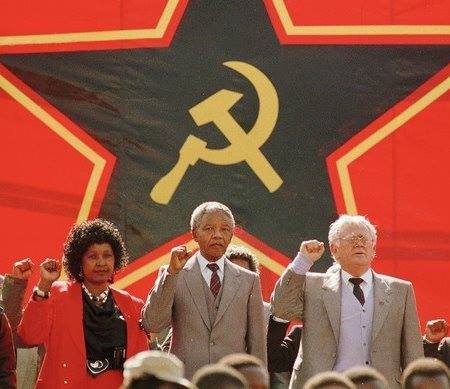 The six giant corporations that produce most of your media seem to be in agreement that Nelson Mandela is a pacifist hero of freedom and equality. You are taught that there is no higher goal than freedom, equality and pacifism in school and through books, movies, music and art.

This cultural consensus presents itself as universal, meaning shared by all people. If that is so, however, why does the media have to constantly pump this message toward you to the point of excluding others? This includes historical facts that are inconvenient.

Nelson Mandela was a Communist guerrilla. This fact should not require explaining away. It should also not be hidden. One way to hide it is to selectively fail to mention it while enthusiastically repeating other ideas. This act of omission combined with what is basically an advertising campaign amounts to concealment and in practical terms, the same thing as lying.

If you find your media is lying to you, it then makes sense to ask why. The answer appears to be that media is a product and inherently untrustworthy, and it is selling to an audience that it perceives is liberal. It may do this because most of the people who work in media, as people who like to draw attention to themselves, are solipsists.

In other words, the megaphone that you trust for truth may most commonly broadcast the products of a mental health problem (solipsism) and mislead you. This means the news is manipulated not for a better world, but for the personal pretense and conceits necessary to justify the insanity of individuals.

The former South African president, who won the Nobel Peace Prize in 1993, has always denied being a member of the South African branch of the movement, which mounted an armed campaign of guerrilla resistance along with the ANC.

But research by a British historian, Professor Stephen Ellis, has unearthed fresh evidence that during his early years as an activist, Mr Mandela did hold senior rank in the South African Communist Party, or SACP. He says Mr Mandela joined the SACP to enlist the help of the Communist superpowers for the ANC’s campaign of armed resistance to white rule.

His book also provides fresh detail on how the ANC’s military wing had bomb-making lessons from the IRA, and intelligence training from the East German Stasi, which it used to carry out brutal interrogations of suspected “spies” at secret prison camps. – “Nelson Mandela ‘proven’ to be a member of the Communist Party after decades of denial,” by Colin Freeman and Jane Flanagan, The Guardian, December 8, 2012.

The following reveals the origins of the people who became the ANC through “pressure from above.” Political groups tend to form where they can find support, funding and weapons:

From its formation in 1921 as the first Marxist-Leninist party on the continent, the Communist Party struggled with the need to reconcile race and class, nationalism and socialism in its doctrine. Formed by whites but for over 30 years the only nonracial political party in South Africa, it initially appealed to the white working class. Skilled artisans and intellectuals had brought socialist thinking from Britain around the turn of the century. In 1909 a Labour Party was formed but split over the World War. Those who opposed participation and were enthusiastic about the Russian Revolution joined with several small Marxist groups to form the Communist Party of South Africa.

The partyâ€™s notorious but anti-capitalist slogan during the white mineworkersâ€™ uprising of 1922 was “Workers of the World, Fight and Unite for a White South Africa,” (emphasis added). The strike was brutally crushed. Recognizing the hostility of white workers to it, the party turned to the African working class, conducting night schools and organizing trade unions. In 1928 almost all of its 1,750 members were Africans. Only about 150 were whites, but they continued to predominate.

Within a few years the party was shattered, hit by government repression but even more by the consequences of obedience to the Moscow-based Comintern. Despite remonstrances about the need for appealing also to the white working class, the Comintern in 1928 ordered as correct the slogan: “an independent native South African republic as a stage towards a workersâ€™ and peasantsâ€™ republic with full, equal rights for all races.” The factionalism and expulsions that followed this declaration virtually decimated the party. With the rise of Hitler and Moscowâ€™s new emphasis on organizing all-class united fronts, the party slowly revived. – “South African Liberation: The Communist Factor,” by Thomas G. Karis, Foreign Affairs, Winter 1986/87.

Even Mandela’s defenders admit his flirtation with Communism was more than at the surface:

We know that between June and December 1961, Mandela remained in hiding in a series of safe houses arranged by SACP members, passing much of the time reading a series of classic authorities on insurgent warfare. This seems the most likely time for him to have joined the party. He already had a rough grasp of the essentials of Marxist ideas, acquired again through reading and discussions with Moses Kotane at the beginning of the 1950s. As he noted much later in his 1994 autobiography, during the 1950s, the certainties offered by â€œthe scientific underpinnings of dialectical materialismâ€ were for him powerfully compulsive. – “Mandelaâ€™s communism: why the details matter,” by Tom Lodge, Open Democracy, September 9, 2011.

And despite generally leaning toward leftism, Wikipedia acknowledges what it considers harmless facts:

Umkhonto we Sizwe (abbreviated as MK, translated as “Spear of the Nation”) was the armed wing of the African National Congress (ANC), co-founded by Nelson Mandela, which fought against the South African government.[1] MK launched its first guerrilla attacks against government installations on 16 December 1961. It was subsequently classified as a terrorist organisation by the South African government and the United States, and banned.[2]

For a time it was headquartered in Rivonia, a suburb of Johannesburg. On 11 July 1963, 19 ANC and MK leaders, including Arthur Goldreich and Walter Sisulu, were arrested at Liliesleaf Farm, Rivonia (26Â°2â€²36â€³S 28Â°3â€²15â€³E). The farm was privately owned by Arthur Goldreich and bought with South African Communist Party and ANC funds. – “Umkhonto we Sizwe,” Wikipedia, Anonymous, retrieved December 6, 2013.

Left-leaning CNN affirms the same facts and points out Mandela’s lengthy history with the Communists:

Mandela’s close association with Marxists goes back at least to the 1940s, when he was enrolled in law school.

He began a life-long friendship with Joe Slovo, “an ardent communist,” the anti-apartheid icon wrote in his autobiography “Long Walk to Freedom.”

Mandela described Slovo as of the people, “without whom I would have accomplished very little.”

A watershed moment tightly bonded Mandela to Slovo and other communist allies.

Police gunned down 69 unarmed protesters in the town of Sharpville in March 1960. Then the government banned the communist party and the African National Congress, which fought for the freedom of black South Africans.

With Slovo and other Marxists, he co-founded the militia movement Umkhonto we Sizwe. It’s meaning: “Spear of the Nation.”

On December 16, 1961, the group carried out its first attacks on government installations and handed out leaflets announcing its existence. – “Nelson Mandela death: Examining the backlash,” by Ben Brumfield, CNN, December 6, 2013.

It is ridiculous to claim Nelson Mandela as either a pacifist or a non-Communist when he was caught, along with his fellow ANC members, in possession of a large number of Soviet Bloc arms and ammunition that was too large to have been purchased on the open market, and thus most likely came from the Soviet government.

A good summary of the history of the period:

In South Africa, it was the Soviet blocâ€”the same communist governments that were brutally repressing their own peopleâ€”that helped the ANC fight apartheid. In the 1980s, they were joined by an American and European anti-apartheid movement willing to overlook the ANCâ€™s communist ties because they refused to see South Africaâ€™s freedom struggle through a Cold War lens. At a time when men like Reagan and Cheney were insisting that the most important thing about Mandela was where he stood in the standoff between Washington and Moscow, millions of citizens across the West insisted that the ANC could be Soviet-backed, communist-influenced, and still lead a movement for freedom. – “Donâ€™t Sanitize Nelson Mandela: Heâ€™s Honored Now, But Was Hated Then,” by Peter Beinart, The Daily Beast, December 5, 2013.

Even more, Western liberals began covering up this fact early on:

We know this from any number of sources, but letâ€™s hear it from Hilda Bernstein, who lived long enough to acquire a shrewd understanding of herself and the Communist movement of which she was a lifelong part. â€œJoe and Rusty were hardline Stalinists,â€ she said in 2004, speaking of her late husband Rusty, a Central Committee member, and Joe Slovo, the most influential Communist of his era. â€œAnything the Soviets did was right,â€ said Mrs. Bernstein. â€œThey were very, very pro-Soviet.â€

This much could be easily gleaned by reading the SACP journal, African Communist, or just sniffing the air outside the London headquarters of the African National Congress; during the struggle years (1960â€“1990) the SACP reeked of Soviet orthodoxy, and the ANC reeked of the SACP. As a journalist, you had to be very careful what you said about this. The civilized line was the one ceaselessly propounded in The New York Timesâ€”Nelson Mandela was basically a black liberal, and his movement was striving for universal democratic values. Anyone who disagreed was an anti-Communist crank, as Keller labels me. – “Mandela & Communism: An Exchange,” by Bill Keller, New York Review of Books, March 21, 2013.

But don’t take our word for it. Read his. Nelson Mandela’s, that is. Here’s an excerpt from his book, How to Be a Good Communist:

In our own country, the struggles of the oppressed people are guided by the South African Communist Party and inspired by its policies. The aim of the S.A.C.P. is to defeat the Nationalist government and to free the people of South Africa from the evils of racial discrimination and exploitation and to build a classless or socialist society in which the land, the mines, the mills, our . . . . . . . (unreadable)

Under a Communist Party Government South Africa will become a land of milk and honey. Political, economic and social rights will cease to be enjoyed by Whites only. They will be shared equally by Whites and Non-Whites. There will be enough land and houses for all. There will be no unemployment, starvation and disease.

Workers will earn decent wages; transport will be cheap and education free. There will be no pass laws, no influx control, no Police raids for passes and poll tax, and Africans, Europeans, Coloureds and Indians will live in racial peace and perfect equality.

The victory of Socialism in the U.S.S.R., in the Peoples Republic of China, in Bulgaria, Czechoslovakia, Hungary, Poland and Rumania, where the living conditions of the people were in many respects similar and even worse than ours, proves that we too can achieve this important goal. – “How to Be a Good Communist,” by Nelson Mandela.

Further reading Mandela’s words, here’s his admission to being part of Umkhonto we Sizwe, the terrorist organization that attacked civilian areas like shopping centers and banks:

I do not, however, deny that I planned sabotage. I did not plan it in a spirit of recklessness, nor because I have any love of violence. I planned it as a result of a calm and sober assessment of the political situation that had arisen after many years of tyranny, exploitation, and oppression of my people by the Whites.

I admit immediately that I was one of the persons who helped to form Umkhonto we Sizwe, and that I played a prominent role in its affairs until I was arrested in August 1962. – “Read the most important speech Nelson Mandela ever gave,” by Max Fisher, Washington Post, December 5, 2013. 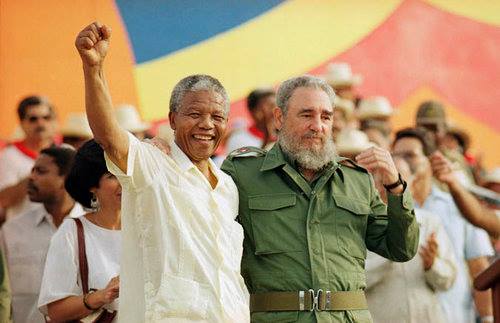 Here’s the paragon of racial tolerance singing “Kill the Boer,” a reference to the Dutch-descended ethnic group in South Africa: