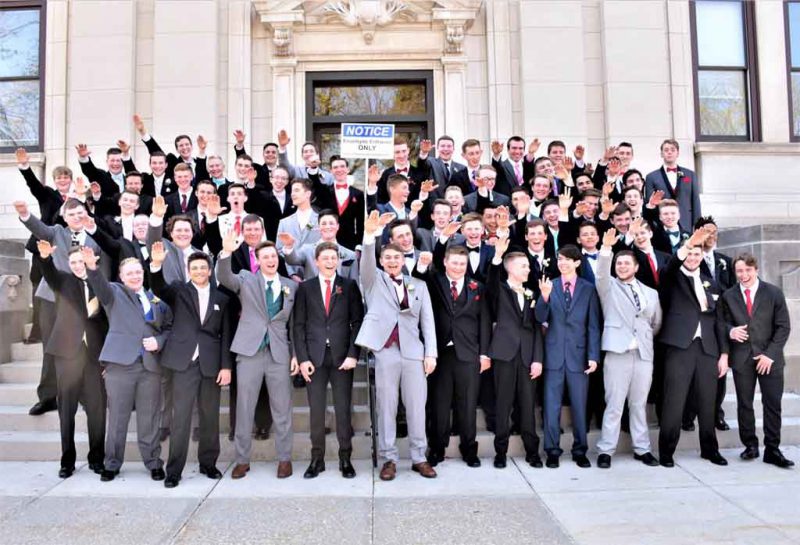 Back in the day, a friend observed that heavy metal fans dressed like an army and wandered around the city in groups. They wore all black, covered themselves in scary symbols and images of disease and warfare, and seemed designed to scare off anyone who came their way.

Looking at this through the filter of biology, we can see that behavior as a form of aposematism:

In other words, if you stick someone in metalhead garb and make them look like they might be prone to violence, evil, and horror, then the rest of the inhabitants of the city give them a wide berth, which enables them greater freedom of movement and as a result, more options than they would otherwise have had.

Similarly, gangs wear bright and distinctive colors to let people know that if they attack these gang members, others will show up and bring more profound violence. Police cars use bright colors and strong lines, and fast-moving emergency vehicles specialize in red, orange, and yellow colors which seize the attention of those viewing.

Thinking of these things naturally makes us wonder what it would be like if an ethnic group or race adopted aposematism. We know that individual members, like warriors or criminals, might through vivid and alarming tattoos, but it would be hard to imagine a whole group signaling its nature as dangerous, especially since many — accountants, clerks, bureaucrats, waiters — are naturally far from violent.

Even worse, in a modern society, no group can really do much signaling at all because our “civilized” existence precludes us from carrying weapons and wearing the skins of animals we have killed, or even drinking from chalices fashioned from the skulls of our enemies. All of the ways that we can telegraph our lurking dangerous nature have been abolished.

Now consider the plight of a group that forms the lucky five percent who, instead of doing what everyone else does by adopting an individualistic regime of equal parts social support and strong warlord power, focus on heroic and idealistic notions that sacrifice individualism to the idea of function and not just function but optimized function, or aiming for a standard above the minimum such as excellence, efficiency, elegance, and a 10,000-year view of utility.

This group knows that most of humanity will not change its behavior because it is fundamentally individualistic, or, having been freed from directly adapting to nature as animals must, pursues the interests of its body and brain while doing the minimum to survive; in groups, this activity forms herd behavior, which unlike how in the animal world creates unite against predators, in the human world consists of human animals uniting in order to ignore the parts of reality that destabilize them by pointing out that their behavior is non-optimal.

Humans fear, more than anything else, the chance that they could be doing better but would have to change current behavior patterns that make them mentally stable in order to do that; most of humanity exists by whatever fictions make it feel good about itself, and the primary fiction is that it could not be doing better with only a few behavorial changes. Humans do not change unless challenged, and only then if the challenger cannot be destroyed, hidden, or driven off do they change.

If we were to plot events in the small, or how they occur in social groups, small towns, and wandering bands of hominins instead of epic big scale history involving nations and races, we would see that most of human history consists of two stories: (1) someone discovers a better method of doing something, everyone else looks bad, and so they burn the witch or destroy the threat and this knowledge is lost to time; or (2) some group gets ahead of others by doing something better, so everyone else bands together to find a way to destroy that “fortunate” group so that no one feels bad for having less than what the fortunate group had, even if everyone could achieve that level simply by changing their behavior.

In this way, literature proves more descriptive than science, philosophy, or history. The human struggle is ultimately a moral struggle for the internal mental clarity that allows people to make sensible choices, such as changing their behavior to have better outcomes. Humans seem to have a built-in limiter that causes them to back away from the risk of feeling bad about the past by changing what they do in the present, and this leads them into a mental fog which prevents them from becoming too powerful, much like how the third world failed to develop technology in any effective way.

Any group which goes against this dominant trend by humanity to be less than useful finds itself a target. Having risen above the herd, it will make the herd envious, at which point the herd will attack with larceny, rape, and subjugation in its mind. If the Mongol and Muslim invasions which presaged the crusades did not show us this, the recent waves of immigration against America and Europe — and the subsequent criminal behavior of the refugees — demonstrate how powerful of a motivator that resentment can be.

At this point, the exceptional group finds itself needing some form of subtle aposematism to use in order to discourage others from coming near it. Europe, Japan, America, Korea, and Israel need some way of driving away other populations, preferably something that meshes with the local superstitions in those areas so that the rest of the world becomes fearful of these exceptional populations. They need some way to be terrifying in a way that other populations cannot counter.

Potentially, nationalism in the West could be a form of aposematism, much as Japan had Unit 731 and Israel has endless wailing Palestinians getting shot as they hurl rocks and grenades at Jewish grandmothers. The world knows Hitler, and it still fears colonialism, which makes these powerful symbolic weapons to wield. The sheer terror of those symbols discourages other groups from even attempting to reach out to the West, being possessed of a mixture of fear and disgust that will keep them away.

Perhaps the West also attempts the same with its endless attempts to convey its approval of homosexuality, transgenderism, and promiscuity in a world where most people shy away from these things because of their destructive impact on the fertility of people who require future generations for their own retirement plans. Maybe all of the neurosis, low-grade insanity, and anti-social behavior in our media constitutes a subliminal desire to alienate the rest of the world.

Whatever the case, the West of the future will need to think of its image abroad. Instead of trying to convince people that we are nice and tolerant and therefore a good place to invade, we will likely strive for ways to shock, appall, and terrify them. Humanity itself might consider a similar strategy for dissuading potential alien species from noticing us as a good place to conquer (or even simply to abduct, probe, and brainwash people who like to take shaky photographs).

In our old view of the world, truth was universal and therefore, whoever was most moral won the worldwide competition by being recognized as excellent. In our new view, we see a more Machiavellian Realpolitik, which is that whoever wins the worldwide popularity contest will be invaded, overwhelmed, and destroyed by the infinite need of the rest of humanity, which means that we must signal that we taste badly and are dangerous if we want to survive.