I indulged in the spectacle of the Super Bowl a couple of months back. It is, after all, an American tradition. Some things I noticed made me laugh, but this quote from the winning quarterback was just hilarious:

â€œFour years ago, who ever thought this would be happening?” said Brees, the gameâ€™s Most Valuable Player. â€œEight-five percent of the city was under water. People were evacuating to places all over the country. We just all looked at one another and said, â€˜We are going to rebuild together. We are going to lean on each other.â€™ Thatâ€™s what weâ€™ve done the last four years, and this is the culmination of that belief.” 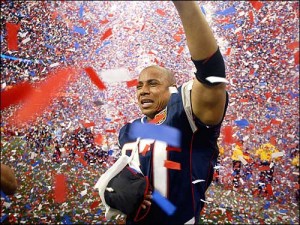 The quarterback, Drew Brees, somehow managed to tie in New Orleans’ awful city design and subsequent epic failure of a flood into a football game. I’m wondering how many of the folks who lived in FEMA trailers for months really cared that much about a football game being played a few states over.

This melodrama sports culture is a symptom of dysfunction within our society. People eat up garbage like this because where we lack adventure in our own lives, we need to create it. Since we’re not very creative as couch potatoes, it’s a lot easier to watch someone else’s creation and then indulge in the media blitz after, of all things, a bunch of guys in tights throwing a pigskin around.

As a result, we can project any fantasy of ours into…football, House MD, video games, you name it. The symbols change, but they were empty to begin with; merely relatable templates of characters, or avatars, we can use to fill in the blanks. In the process, we find something unproductive to do rather than actually create something.

Rather than stop at the melodrama of the Super Bowl, a couple of decades ago someone came up with the idea of fantasy sports. So now there’s a fantasy on top of the fantasy: sports can represent anything to you, especially if your team wins. But now we can break that fantasy down further, to the individual player level. Sort of a “SIM”sports, where you build your own team and play General Manager, like a live-action video game. It’s a wonder fans haven’t revolted and demanded more games per week out of the athletes, not so they can view more games, but so they can get more stats more quickly. 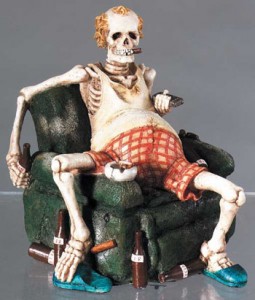 It brings to mind Philip K. Dick short stories, many of which were centered around a human population which preferred to be distracted by trivial games than deal with a barely livable land mass. As long as basic survival needs are met, he seemed to argue, humans will do whatever they can to avoid the real world.

There are still many who would prefer the real world; we don’t need to be as cynical as Dick. But as long as there are millions of us able to get our hands on Macs, cell phones, and fast food, the irony is that observing our attempt at shutting out reality helps us define the reality of our species in another way – namely, the many are not qualified to lead. Human behavior is fatalistic and selfish as soon as most can imagine themselves with no responsibility. Fantasy sports and the glitzy light show surrounding major sporting events are just two examples.