Misanthropology: Review Of Kill All Normies By Angela Nagle 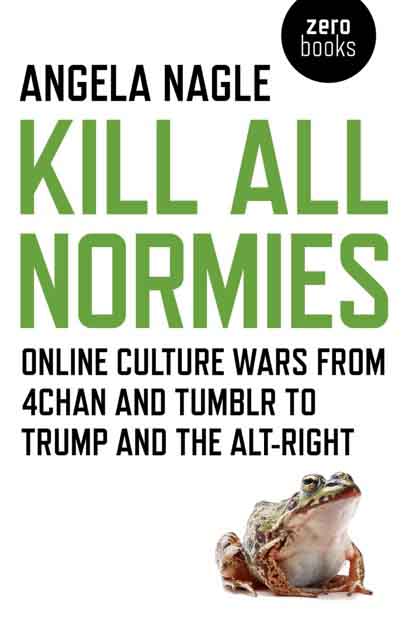 The most depressing fact about leftist hegemony is not that leftists are wrong. As bad as that is, what’s worse is how limited their ideological talent is. Angela Nagle’s new book, Kill All Normies, is a fine example. It has managed to get glowing reviews not only in her own socialist circles, but now even in National Review, too.

To belabor a point, what makes this so depressing is not that the book is wrong (which it is), it’s that the book is so poorly written. Do I write that out of malice because I am just a bitter poster annoyed at having fallen under the microscope? Judge for yourself with some of these exemplar sentences:

“The online right in return has become nastier still, with many drifting so far right it would have inconceivable just a few short years ago, to Jewish conspiracies and so on.”

“It’s still not much of a recommendation, but at least it is less overtly hateful towards women at least in principle.”

“At colleges and universities, debates about whether Stanford University should assign John Locke or Franz Fanon played out, writes Hartman, and from the Wall Street Journal to books like The Closing of the American Mind by Allan Bloom, Illiberal Education by Dinesh D’Souza and Tenured Radicals: How Politics Has Corrupted Our Higher Education by Roger Kimball.”

“In the lead-up to the election of Barak [sic] Obama in 2008, his message of hope was publicly and with great earnestness shared by numbers of liberals online, eager to show their love for the first black president, ecstatic to be part what felt like a positive mass-cultural moment.”

“In response to the controversy, Cardiff University’s vice-chancellor pandered to those attacking Greer, saying: ‘discriminatory comments of any kind’ and how it ‘work(s) hard to provide a positive and welcoming space for LGBT+ people.’”

One sentence, in the opening paragraph of chapter three, manages to stretch across fourteen lines of text without so much as a single semicolon. How even a small, Marxist, publishing house let all of this slide is beyond me. It left me wondering how many typos and awkward sentences they let slip into their other heady titles, like Deconstructing Dirty Dancing. Astonishingly, not one leftist review mentions this, even in passing. The Baffler hyped the book by publishing an excerpt, typos and run-on sentences and all.

Of course, the book could be good despite all these warts, so long as the the thesis was strong and the observations keen. But that is just not the case. Obviously, I am a biased party, but hear me out.

The book’s full title is Kill All Normies: Online Culture Wars from 4chan and Tumblr to Trump and the Alt-Right, but it shouldn’t be. Kill All Normies talks plenty about 4chan and Tumblr (and the derivatives of both: 8chan, left-Twitter, etc.), but has very little to say about the alt-right and next to nothing to say about Donald Trump. Nagle says relatively interesting things about the internet’s two extremes, but really goes too far in tying them genealogically to the alt-right. Although she understands (correctly) the link between the chans and the alt-right, she implies that the latter came out of the former. In her book, all the shitposting and hacker culture led to PUAs, which in turn led to Richard Spencer. While it’s true that all of these disparate forces came together in their excitement and support for Trump’s candidacy, and are now more in the same boat than previously, they developed largely separately.

The alt-right existed alongside, but outside of, the chans from the internet’s inception until just over two years ago. Pickup “artistry” in our time started with Mystery and Tucker Max in the early 2000s, who never had anything to do with either group. Even in 2010, when Richard Spencer launched the first AlternativeRight.com, no one would have lumped it and 4chan together. The big question of 2015/2016 is why exactly 4chan, and the PUAs with them, got really into the alt-right.

I genuinely don’t know the answer, but Nagle doesn’t even address the question because she writes as though everyone was on the same side from day one. But if you didn’t know better, reading this book would make you think the plans for launching major groups in the alt-right were all hatched on /pol/. The closest she comes to meditating on this new convergence is when she summarizes #GamerGate. But that was just a small part of the process at best—and no one needed a book to tell them about the connection between it and Milo.

Nagle fails to grapple with this history because it conflicts with her eccentric thesis. She views the “identity politics” of both Tumblr and her 4chan-alt-right hybrid as products of what happens when the obsession of being “counter-cultural,” “indie,” and “authentic” goes too far. She draws heavily from the endless cultural criticism of post-WWII music to arrive at this point. The reasoning goes: first the Beatles were cool and rebellious, then it became mainstream so next there was punk, then that became mainstream so hipsters came, but then hipsters became mainstream so…folks became either alt-right or SJWs. Both ends of this “horseshoe” really just want to be the “true rebels,” part of something that cannot be co-opted, and that their lame parents just won’t understand.

The trouble with this view, in short, is that it is wrong. Nagle gets to this conclusion by pedaling backwards. She thinks people post Pepe because kek’s only son is edgy, and from there go exploring for more edgy stuff and adopt that, too. But it’s the other way around. Alienated people discover the alt-right, which spells out what they’ve been thinking since they started public school, and thereafter they post Pepe. The kids post Pepe because, for now, annoying liberals is the only way they can see to fight back. As a better writer than me noted, “trolling is a weapon of the weak.” For better or for worse, Pepe is the symbol of choice these days, but it’s just that—a symbol. It represents something, a whole line of thinking and beliefs; it is not just an offensive end unto itself, like an f-bomb laden Blink 182 song.

The alt-right is emphatically not full of hipsters, and no one would allege as much. Does Paul Kersey, to show just how unique he is, listen to lots of Parquet Courts and watch old Kuchar Brothers movies? Nope. He likes classic American action movies like Red Dawn and Point Break. Nagle, I suspect, is projecting a bit here. The folks who have tastes way outside the realm of your average normie in both politics and the arts are not the writers at TRS or Daily Stormer. Hipsters who tweet about forthcoming Criterion Collection DVDs and old punk rock B-sides, but also hold unusual political beliefs, are all contributors at magazines Nagle reads and writes for like Jacobin and Current Affairs.

Nagle takes her “Nazis-are-the-real-hipsters” to ludicrous heights when, after noting that Richard Spencer and Mike Cernovich claim many of their opponents are just “basic bitches,” she concludes:

When we’ve reached a point where the idea of being edgy/countercultural/transgressive can place fascists in a position of moral superiority to regular people, we may seriously want to rethink the value of these state and outworn countercultural ideas.

To this, I can only speculate that Nagle has spent too much time on 4chan. Who thinks the alt-right is morally superior to normies? Only the alt-right itself, and for reasons of morality, not because of the superiority of transgression. The fact that the alt-right breaks taboos gets attention, and attention only, not reverence. Indeed, the people with the least regard for the alt-right are exactly those who care most about being counter-cultural: hipsters. Stephen Malkmus does not think the “alt-right” is the next big thing because we “give no fucks.” The degenerate founder of the “Cinema of Transgression,” Nick Zedd does not like Richard Spencer. I promise. Zedd probably hasn’t even heard of Spencer, he’s probably too busy “transgressing” by being broke in New York City, shooting heroin, and saying mean things about Christians.

In her quest to make this theory fit, Nagle never takes the ideas behind the alt-right seriously. She never mentions two of its key figures: Paul Gottfried and Steve Sailer, despite plenty of other leftists profiling them in the last year because of their incredible importance in the alt-right. Mencius Moldbug is mentioned once. The Right Stuff and Sam Francis are both mentioned once, and in passing. The Occidental Quarterly is referenced only to give F. Roger Devlin a byline. She brings up Pat Buchanan just to note that his devout Catholicism is at odds with Milo’s libertinism.

How can a book about the alt-right have such omissions? Because it isn’t about the alt-right. It’s a book about the weirdest people on 4chan, the sleaziest PUAs, and how they liked Trump. With that last ingredient thrown in, the book claims to be about the “alt-right,” and does its best to make it seem full of losers who just want to be the new Sex Pistols. Somehow, Nagle missed the part that what motivates the alt-right is a desire not to become a despised minority in a country built by our ancestors and to reinvigorate civilization.

It’s too bad the book is such a miss, really. The alt-right is interesting, and worth studying. Hopefully someone else will take a shot at it, maybe even someone with a copy editor.

As Leftist Anti-Majority Thought Rises, Other Groups Join the Resistance to It | Buxom Button-Bursting Bosoms Breasting Boobily and Other Social Justice Rhetoric