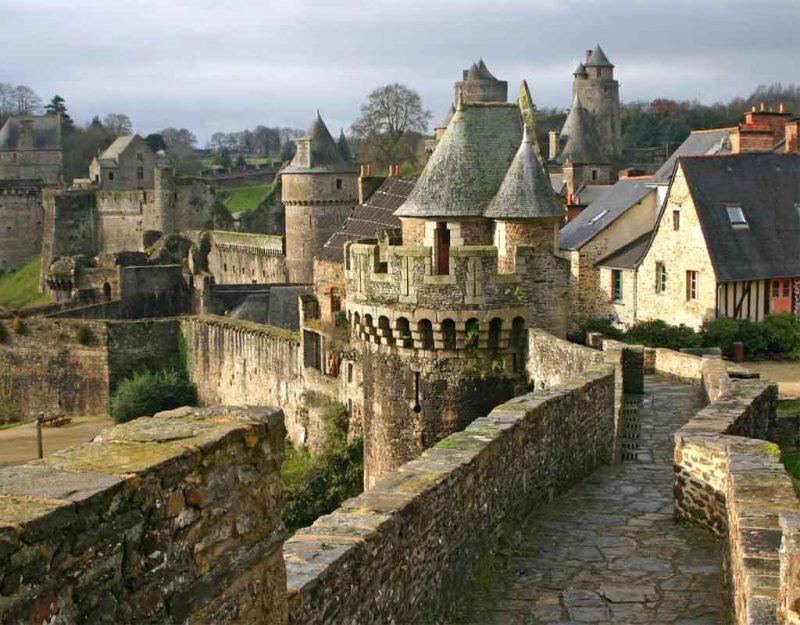 When we look back over Western history, we see a steady liberalization beginning about a thousand years ago when the good leadership of the kings allowed society to thrive, spreading wealth and power to lesser men.

These promptly revolted, in part angered by the high costs of European wars and the chaos brought about by Christianity fragmenting into different sects, and overthrew the kings, transferring power to the middle classes in the name of the impoverished peasants.

France gave this movement its ultimate form with its revolution, overthrowing the aristocrats entirely and replacing them with a republic based on democracy. That failed quickly and suddenly, leading the movement to adopt socialist-style subsidies in its future plans.

Liberalism, or the idea of anarchy with property rights, gained support among the middle classes because like all human solipsists they project their own situation onto others, and assume that if everyone just lived in nice suburbs and worked hard at their jobs, life could be fine.

This takes civilization for granted and refuses to nurture it, which requires strong leadership, instead preferring to sit around and divide up the wealth of the past while making money from selling consumer products to peasants. We are still living in this “liberal” form of society.

Understood properly, liberalism relies on egalitarianism — an assumption that people have equal reasoning capacity and therefore, make the right decisions for themselves and others — as the basis for its anarchy, since people will in theory simply purchase what benefits them, leading magically to order.

Leftism refers to the different degrees of the philosophy of egalitarianism, from anarchy through Communism with modern social democrats somewhere in the middle, and liberals are a mild form of Leftist. Modern society consists of “liberal democratic market socialism,” or democracies with civil/human rights and some kind of entitlements state; all first world societies today follow this model.

We can track the history of the rise of Leftism through the first form that it takes, liberalism, which is sort of like an early infection without many symptoms. Liberalism meant opposition to strong leadership and tradition, and rose in the mid-1700s alongside the industrial revolution:

Up to 1769 the word was used only in pre-political ways, but in and around 1769 such terms as “liberal policy,” “liberal plan,” “liberal system,” “liberal views,” “liberal ideas,” and “liberal principles” begin sprouting like flowers.

My research with Will Fleming finds that the Scottish historian William Robertson appears to be the most significant innovator, repeatedly using “liberal” in a political way, notably in a book published in 1769. (I presented more details in a lecture at the Ratio Institute, viewable here.) Of the Hanseatic League, for example, Robertson spoke of “the spirit and zeal with which they contended for those liberties and rights,” and how a society of merchants, “attentive only to commercial objects, could not fail of diffusing over Europe new and more liberal ideas concerning justice and order.”

Liberalism shows us the two basic ideas of government: either you have a delegated person of superior ability who exerts strong leadership, or you attempt to rule as a group, which by the paranoia by which group members keep the rest of the group in balance, ends up as neurotic, infighting-ridden weak power.

Liberalism also derives from the practice of adversariality in European political and economic life, a process in which institutionalized competition—such as the competition between different political parties in electoral contests, between prosecution and defense in adversary procedure, or between different producers in a market economy (see monopoly and competition)—generates a dynamic social order. Adversarial systems have always been precarious, however, and it took a long time for the belief in adversariality to emerge from the more traditional view, traceable at least to Plato, that the state should be an organic structure, like a beehive, in which the different social classes cooperate by performing distinct yet complementary roles.

The adversariality results from the fundamental notion of egalitarianism as prioritizing the individual first, instead of deferring to social order, natural law, and the invisible “divine” pattern order perceived to pervade all existence.

In this view, the individual sees himself as oppressed by the demands of society, so he forms a belief system around opposing those demands and reducing them as much as possible. The first thing he wants to depose is the notion of hierarchy and order, because he does not want to be ranked lower than anyone.

Of course, this creates a mob.

That sort of individualism underlies both liberalism and other forms of Leftism, including socialism and communism, which simply opt to subsidize the individual as a means of achieving equality. In all cases, the individual opposes society by demanding autonomy and authority for the individual.

Leftism seeks to abolish the pairing of duty and privilege. It wants autonomy with the benefits of civilization and none of the obligations. This means that the individual says “me first” and everything else, including civilization, becomes a means to that end.

We call modern civilizations facilitative because as they tell it, their goal is to provide for the visions and desires of the individual. Civilization has become a means to the end of individualism. When individualists gather together, they form a collective for this this purpose.

An egalitarian wants to be treated as an equal, meaning that there cannot be hierarchy. Bad and good have the same value so that the individual cannot be ranked as one or the other and by that process, lose social standing or a chance to partake in the benefits of civilization.

When one explores Leftism to its roots like this, it becomes revealed as the psychology of the individual preemptively and passive-aggressively defending himself against society through a dual symbolism of victimhood and scapegoats.

As Leftism collapses in the twenty-first century, it will become more important to understand its roots as a psychology, instead of taking it at face value, since we know that it is merely selfishness (individualism) and will mask itself in whatever positive-sounding illusions it can.

Smart And SeXy by Roderick Kaine Now Available As Free Ebook | Work Is Not About Productivity. It is About Control.