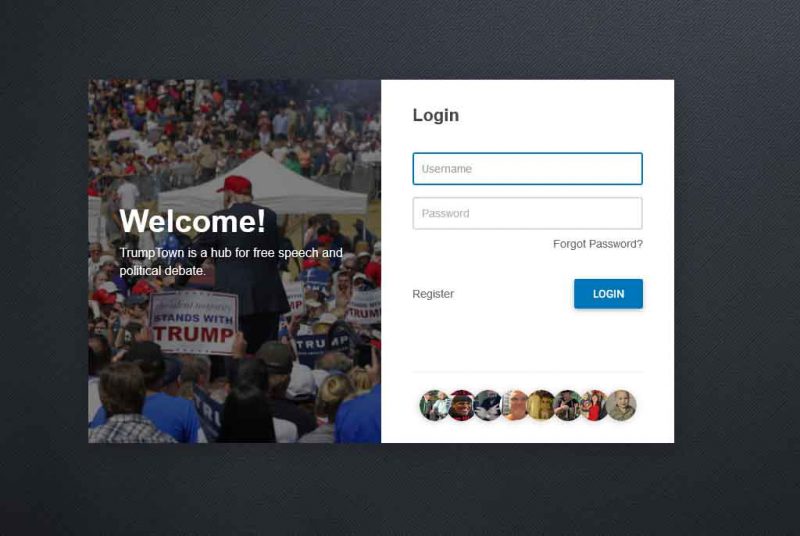 As mainstream social media reveals that it supports the democracy endgame agenda — diversity, metrosexuality, transgenderism, political correctness, parasitism — as a means of holding together the most fanatical media consumers as an audience, new alternatives have appeared.

One of these, TrumpTown, offers open discussion and relative safety for conservatives, and so has grown its audience in the past few months. However, upon submitting an app for consideration in the Apple store, TrumpTown encountered an old pattern:

On February 6th, after our developer put the finishing touches on the app, we submitted it to the Apple app store for review. According to Apple’s own website, a vast majority (90%) of apps are reviewed within 72 hours at the latest.

That certainly wasn’t the case for us. After the first week went by, we knew something didn’t seem right. After 4 agonizing weeks of the app being “in review,” we received an email today from the Apple review team that the TrumpTown Social Network app was officially “rejected.”

The reason given by Apple is vague and confusing at best:

“Your app includes content that many users would find objectionable and offensive. Specifically, some posts include content which contains an excessive amount of violence or gore.”

But listen, we’re not stupid. We can read between the lines.

In reality, it seems as if Apple found a vague and ridiculous way to keep TrumpTown from growing — especially as we head into another Trump campaign year. Pretty darn convenient, right?

And here’s what’s crazy about all this:

1. At any given time on Twitter, there are thousands (if not more) of pornographic and violent images being posted. Yet, they have an app.

2. People have live streamed suicides and other violent acts on Facebook, on multiple occasions. There are also a myriad of inappropriate pages and groups, including sexually explicit, violence, pro-terrorism, etc. Yet, they still have an app.

3. The same can be said for Google — which features the largest collection of sexual, violent and otherwise inappropriate images in the world, but they still have an app.

The list goes on and on. So, it’s crystal clear that we’ve been targeted because we’re a pro-Trump platform. Without question.

We started TrumpTown to get away from the anti-conservative censorship thrust upon us by the other networks, only to find the exact same treatment from Apple.

Make no mistake — the liberal, anti-Trump tech bastion we know as Silicon Valley is doing everything they can to silence our conservative voices. A TrumpTown iOS app would have changed the game for us and our users, and they apparently nuked us because they knew that.

Do you think they would have rejected a pro-Democrat social network? Absolutely not.

Silicon Valley knows that mainstream America fled its products years ago. If you have anything better to do, you are not sitting around on Facebook, Reddit, Twitter, Spotify, Instagram, TikTok, and WhatsApp all day. You check in on the evenings, maybe.

Leftists, on the other hand, have nothing in their lives but working toward the Utopia worker’s paradise to be created by equality. They have all day on welfare or at their entry-level, do-nothing, and make-work jobs, so they spend it on social media.

Even better if they work for the government, which allows them to do basically nothing and get really good benefits, freeing up the rest of the day for activism through their phones connected to social media and private email and chat servers where they coordinate.

Apple, like other Silicon Valley companies, has gone Leftist in order to accommodate these people, much like the company went metrosexual in the 1990s in order to attract a new generation of clueless and damaged people spat out by the modern state.

Now Apple is doing to TrumpTown exactly what it did to Gab: since the site is reasonably open discussion, something traumatic might be seen, and that is a good reason to shut it down because to the safe space snowflake audience, anything conservative is scary.

Cutting Entitlements Will Be Required To Solve The National Debt | Periscope (March 5, 2019)