For the past few decades, people have often asked a question perfectly fit for an age of pretend equality and forced tolerance. Where are our heroes?

The archetypal eternal hero and villain in our midst have been replaced with social and biological group categories. The historically downtrodden groups are exalted and it is to this underclass we are expected to defer. 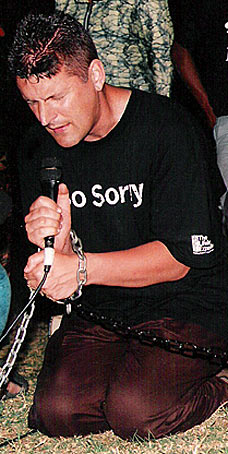 It could be said that the more pitiable the group, the more ‘in the right’ and perhaps also, ‘in the know’, or correct they are. For the villains, emulating any of the hero categories who each hold the villain category in perpetual contempt, as a toddler emulates an adult, then becomes a public display of penance in hopes of vindication.

As for the villains in an age of manipulative falsehoods, it is this group who, our media and academics inform us, committed all past acts of downtrodding. The modern villain group category are they who now must perpetually atone for sins past and present against an ever expanding quantity of pitiable hero groups.

By systematically separating the identifiable guiltless from the human collective since post-colonial times, the supreme and only villain in our time stands revealed before us today.

It has been determined that the great remainder, the various races of non-European man, the non-Christians, the women, the homosexuals, the handicapped, the poor and the homeless have all at some point and continue to fall prey to this perpetual offender.

The implied consensus therefore places our villain apart from and beyond all of the other conceivable divisions of mankind. However:

Call it racial jujitsu: A growing number of white Americans are acting like a racially oppressed majority. They are adopting the language and protest tactics of an embattled minority group, scholars and commentators say.

Most of the rest of the foregoing CNN article is irrelevant. Truly, the only significant revelation given is an opinion manufacturing organ straying from the usual heroes and villains script.

Still, one of the biased views quoted recasts our heroes and villains alike today as the discredited Homo economicus, with the villain side (only this group) merely experiencing ‘anxiety about marketplace competition’.

Yet, our social reality villains have had much more to say for themselves than this reductionist recasting would have us believe.

In a multiethnic and multicultural society, the identity of different ethnic groups is incompatible with liberal individualism. On the one hand liberalism preachesthe free market with happy consumers as the ultimate identity for all; yet on the other, the very dynamics of liberalism cannot dispense with the conflicting racial and ethnic identities in its own multicultural body politic.

In fact, as ironic as this may sound, multiculturalism (which is the fraudulent euphemism for multiracialism), presents the biggest threat to the liberal system. This is because it provokes the sentiments of victimology among its different ethnic and racial constituents. Modern multicultural society, as the former Yugoslavia has shown and as modern US is showing daily, is a fragile system prone to racial and ethnic tension. Pierre AndrÃ© Taguieff a French left-leaning writer and politically correct dissident, notes, that â€œparticularly interethnic rivalry can be radicalized by the slightest spark (a minor event ) and merge into a conflict resembling a civil war.â€

What we are seeing in multicultural liberal democracies are multiple political identities climbing under one another in a race to the bottom for increased social status. The most coveted status for one’s own group, in a bizarre twist promising government entitlement programs, is that of past and present victim or the group considered most pitiable of all.