For thus you speak:Â  ‘Real are we entirely, and without belief or superstition.’Â  Thus you stick out your chests – but alas, they are hollow! – Nietzsche 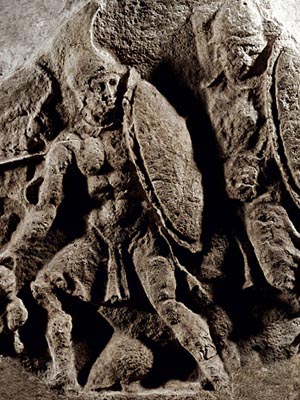 The phrase “men without chests,” originally coined by C.S. Lewis, is taken from a chapter in Francis Fukuyama’s The End of History and the Last Man.Â  Much of the book revolves around thymos, Plato’s spirited part of the soul that yearns for honor and recognition.Â  Thymos can then be divided into two:Â  megalothymia as the need to be recognized as superior to others, and isothymia as the need to be recognized as merely equal to others.Â  Although the rational part of the soul is the highest and should rule, the spirited part needs its due.

At this particular crossroad of history, one gets the feeling, that in a broad sense, we do not lack rationality at all.Â  We lack spirit.Â  Why is this?Â  It is because liberal democracy has unequivocally chosen equality/isothymia and shunned megalothymia.Â  Certainly megalothymia needs to be controlled and restrained, but can it go too far?Â  If a society encourages expression of megalothymia, such as strong reverence for military and clergy, or deference to wise elders, then men have a certain incentive beyond satisfying the appetites.Â  Young men will think to themselves, one day I want to be a soldier, one day I want to be a wise elder.Â  Thinkers from Plato to Machiavelli to Hobbes to Locke have tinkered with how to best sublimate megalothymia.

It seems to be Fukuyama’s (and certainly Nietzsche’s) belief that this sublimation has hit a dead end, resulting in a man composed of only his appetites and his rational mind.Â  What good is the rational part of the soul if there is no spirit to be ruled?Â  What good is a brain without a heart?

The typical citizen of a liberal democracy was that individual who, schooled by Hobbes and Locke, gave up prideful belief in his or her own superior worth in favor of comfortable self-preservation.Â  For Nietzsche, democratic man was composed entirely of desire and reason, clever at finding new ways to satisfy a host of petty wants through the calculation of long-term self-interest.Â  But he was completely lacking in any megalothymia, content with his happiness and unable to feel any sense of shame in himself for being unable to rise above those wants.Â  [The End of History and the Last Man, Chapter 28, p. 301]

Fukuyama sums it up:Â  “To truly esteem oneself means that one must be capable of feeling shame or self-disgust when one does not live up to a certain standard.”

But let’s stop bellyaching about what liberal democracy has turned us into.Â  Let’s be pro-active.Â  There is still time to find our spirit.Â  If you need some spirit, read The Iliad.Â  That should put some hair on your chest.

In The Iliad, men challenge, insult, and shame each other all the time.Â  Achaeans challenge Achaeans, Trojans challenge Trojans, Gods challenge mortals, brothers challenge brothers, leaders challenge high-ranking chiefs, and allies challenge leaders.Â  They don’t do it to insult and manipulate, they do it to rouse and inspire.Â  Men had thicker skin in the days of The Iliad.Â  Sometimes a guy just needs a swift kick in the arse.

Agamemnon, lord of men, shames deserters and thus rouses the Achaeans/Argives for war:

But any men he saw retreating from hateful battle
he would lash with a sharp burst of rage: “You Argives –
glorious braggarts!Â  Disgraces – have you no shame?
Just standing there, dumbstruck like fawns
done in from hightailing over some big meadow,
winded and teetering, heart inside them spent.
Standing there dazed, your fighting spirit dead –
what are you waiting for?Â  You want these Trojans
to pin you against your high sterns beached in the surf?
To see if Zeus will stretch his hands above your heads
and save your craven lives?”
The Iliad, Book IV, 275-285 (Homer. The Iliad. Trans. Robert Fagles. NY: Penguin Books, 1998)

Even heroes like Odysseus, great tactician, and Diomedes, lord of the war cry,Â  get called out by Agamemnon (Book IV).Â  If you read these lines, you’ll notice that the men do not argue with each other or throw tantrums, they take it in stride with dignity.Â  Diomedes:

Not a word of retreat.Â  You’ll never persuade me.
It’s not my nature to shrink from battle, cringe in fear
with the fighting strength still steady in my chest.
I shrink from mounting our chariot – no retreat –
on foot as I am, I’ll meet them man-to-man.
Athena would never let me flinch.
The Iliad, Book V, 279-284

If you don’t feel anything after reading that, you truly are a last man.Â  So let’s take a look at these “last men.”Â  Two types of last men, in particular, seem to be in vogue and converging.Â  One seems to be the manifestation of desire/appetite, the other reason/rational mind.

These vagabonds are a well known cliche, and perhaps a derivative or updated version of the rebel/frustrated punk kid who hates his parents and the town he grew up in, running away from home to chase that wild dream.Â  They are always on the move.Â  In nature, this resembles the scavenger, also constantly on the move, hopping from carcass to carcass.Â  The vagabond lives hand to mouth, job to job, paycheck to paycheck.Â  Unlike the king of the jungle, they don’t mark and defend their own territory, they don’t have their own realm to roam and to rule.

Vagabonds are not new but they seem to be growing.Â  For some reason every college graduate and/or twenty to thirty something feels justified to wander around the world for years on end to find themselves, or “live life to the fullest,” or whatever.Â  These people are on permanent vacation.Â  But the best part of a vacation is coming back to home sweet home, is it not?

When do men get into trouble?Â  When they’re sleeping soundly in bed next to their wife or when they’re out gallivanting around past midnight?Â  While you’re partying in exotic locales, your backyard is being pillaged and your women are being defiled.

Wise, old Nestor warns of plundering and scavenging too soon:

My comrades –
fighting Danaans, aides of Ares – no plunder now!
Don’t lag behind, don’t fling yourself at spoils
just to haul the biggest portion back to your ship.
Now’s the time for killing!Â  Later, at leisure,
strip the corpses up and down the plain!
The Iliad, Book VI, 78-83

Now to the defeatist/fatalist.Â  There is a lot of talk about the death of the West.Â  People, using their rational mind cite graphs, models and reports.Â  They watch the evening news, they read the newspaper.Â  All signs point to collapse.Â  But are we over-thinking things?Â  Are we calculating too precisely?Â  Are we, in fact, rationalizing, our own collapse?Â  We drown in well-thought-out analysis but starve for theoretical violence.

For those who want to run away or wallow in defeat:Â  don’t you know that the tide of war is subject to the unpredictable and capricious whims of the Gods?Â  Wouldn’t you look foolish if you retreated at the eleventh hour only to miss the inconceivable, come-from-behind victory?Â  Apollo rouses the Trojans:

Up and at them, you stallion-breaking Trojans!
Never give up your lust for war against these Argives!
What are their bodies made of, rock or iron to block
your tearing bronze?Â  Stab them, slash their flesh!
Achilles the son of lovely sleek-haired Thetis –
the man’s not even fighting, no, he wallows
in all his heartsick fury by the ships!”
The Iliad, Book IV, 588-594

We are born into this time and must bravely follow the path to the destined end. There is no other way. Our duty is to hold on to the lost position, without hope, without rescue, like that Roman soldier whose bones were found in front of a door in Pompeii, who, during the eruption of Vesuvius, died at his post because they forgot to relieve him. That is greatness. That is what it means to be a thoroughbred. The honorable end is the one thing that can not be taken from a man.Â – Oswald Spengler, Men and Technics (New York, 1932)

To this day, in nautical culture, the captain is always last off the ship.Â  It is not just a duty, it is an honor.Â  There are still stalwarts out there somewhere!

Life is battle.Â  Sometimes you have to pick up your sword, don you helmet, and wage war in far-away lands.Â  But when the smoke clears, don’t dishonor yourself, scrounging around for spoils.Â  About-face and march homewards.

“Now be men, my friends!Â  Courage, come, take heart!
Dread what comrades say of you here in bloody combat!
When men dread that, more men come through alive –
when soldiers break and run, good-bye glory,
good-bye all defenses!”
The Iliad, Book V, 610-614

Now up and at ’em, you long-haired Achaeans and you stallion-breaking Trojans!Â  Pray to Father Zeus, whose shield is thunder.Â  May the best man win!