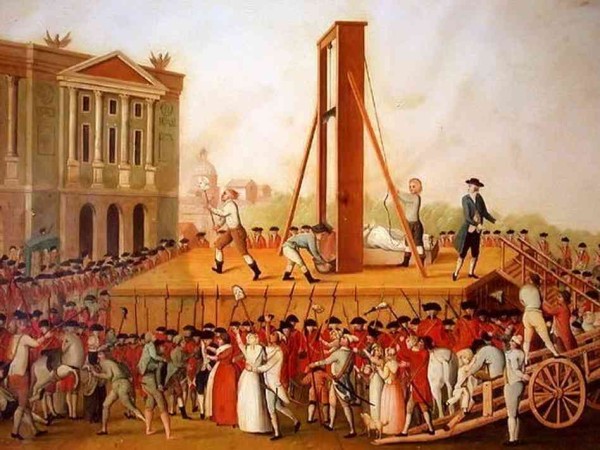 A revolution occurs. In theory, the justification is that the people are starving. But then, it starts to look like revenge.

For months at a time, people stream to the public squares. There, they watch the execution of whole families: men, women and children.

They cheers as the heads roll. Over time, it becomes clear that it is dangerous not to cheer. If you do not, someone might suspect that you sympathize with the executed.

Those who were executed were given trials, by the way. Their caste was enough to convict them, but to keep everyone happy, investigations were conducted and official paperwork completed. Then, to the guillotine.

This mentality lives on in our time. In fact, it has existed in every age of humanity and probably also exists among animals. When computers get smart enough to talk and explain themselves, it will exist among them too. It is eternal. It is also evil.

A great man once said:

Insanity in individuals is something rare — but in groups, parties, nations and epochs, it is the rule. – Friedrich Nietzsche

Insanity — or delusions — in groups exist because whatever is most popular in the group is selected as a replacement for reality itself.

This occurs in part because a more easily comprehended idea will be more popular. And in part because people prefer to believe what they want to be true, not what is true.

But there’s another mechanism that’s more insidious. It has two parts, a positive and a negative.

Groups determine what succeeds. The positive part of this mechanism is that if you want to succeed in a society, you need to come up with something that is popular. Then people buy it, vote for it, and demand it in social circles.

In groups, people abuse outsiders. The negative part of the mechanism is that if you offend someone within the group, they may style you as an outsider. This allows individuals to control the group, but only through styling themselves as victims of someone else’s failure to side with the group enough.

This is what happened in France — if you didn’t cheer enough when they beheaded six year old girls, you were seen as a possible enemy of the state. It can be you at the guillotine next, citizen. The execution of ideological enemies unites the group to such a degree that turning on itself is a net win. Welcome to being a cog in the machine.

If you wanted to draw an analogy, this behavior is similar to what happens when an abuser confronts a child. He or she says to the child, “Don’t tell what we’ve done here, or I’ll hurt your pet.” Maybe he threatens the parents, a younger sibling, a friend or something else sacred. But the point is the abuser is holding the victim hostage to fear.

Our modern politics is based on rule by the mob which holds us all hostage to fear. We’ve got to go along with it… or we might be misunderstood, mistaken for the enemy, and executed publicly for the amusement of others.

This is why in our society, everything gradually gets dumber and more ideological at the same time. No one wants to be out of step. Or they might be next at the guillotine.

The true nature of evil | Caucasianism