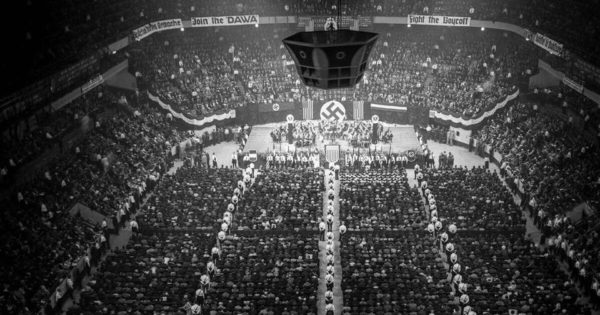 Another high-profile “Nazi” has defected, mainly because this happens every few years, with the Nazi in question discovering that he is gay, Jewish, part-black or some other “contradictory” aspect that fascinates the Left who truly believe that if you oppose something, you must secretly love it. Never mind that this describes their relationship to power, not how the rest of us work.

In this case, the subject in question really won the lottery. He was not only gay, but part-Jewish, and so he has a get-out-of-jail-free card of unprecedented magnitude. In short, by revealing those details, he was able to erase his Nazi past in a minute and make himself a pet of the ruling elites, who are always Leftist unless they are actually good.

The media adore these sorts of stories:

A prominent neo-Nazi and former organiser of the National Front has given up his far-right views as well as revealed he is gay and has Jewish heritage.

Kevin Wilshaw was a high-profile figure of the National Front in the 1980s and was speaking at extreme right events as recently as this year.

Luckily, our journalists-in-chief are too simple-minded to realize that not just is this not unusual, it is the norm, and fits in with a pattern of anti-social and dysfunctional behavior by white nationalists. Extremist philosophies attract those who only feel accepted when they think their aberrant behavior will not be seen as abnormal.

Frank Joseph Collin is most often associated in the public mind as the neo-Nazi who threatened in 1977 to march and rally in Skokie, a predominately Jewish suburb of Chicago.

…The infamous Frank Joseph Collin (the half-Jewish, ex-neo-Nazi, and convicted pederast) is now also a witch.

The Illinois Corrections Department released Collin after three years, a “minimum time served,” from his 1980 conviction of sexually molesting young boys. Since 1983 Collin has established himself as a published author, editor, and anti-science proponent.

But the list goes on. There’s Frazier Glenn Cross, Jr., who shot up a Jewish community center, killing three people — none of whom were Jewish — after falling out with his former comrades because he admitted he was a police informer.

An uncomfortable overlap with drugs, police informers, pedophilia and domestic abuse seems to chase the far-Right around because when you recruit from the most disaffected members of society, you also get some seriously unstable people who look at the movement and think, “Well, no one will notice my weirdness there.”

The only way to beat this is to go legit and have a movement that only advocates policy-level changes, such as abolishing diversity and repatriating those who are not Western European, and does not get into extremist symbolism, violence fetishism or other dysfunctional behaviors.

We fear becoming a mainstream party on the farthest reaches of the Right because every mainstream party has quickly shifted Leftward. That happens when you try to recruit a mass audience, but not when you target the sensible few. It is possible to be mainstream without being corrupted, although you will never be as mainstream as the true McCheeseburger parties which spin scapegoat/victimhood fables for fools.

As the Alt Right rises, it is making the decision to avoid the mistakes of white nationalism, including its over-reliance on the alienated which resulted in it becoming a warm and welcoming host for the mentally unstable. Our future lies in having real ideas, working toward them, and ignoring the human chaos that blights every underground movement.

Do We Really Want To Live Like This? | Ethnography of Civilization Collapse