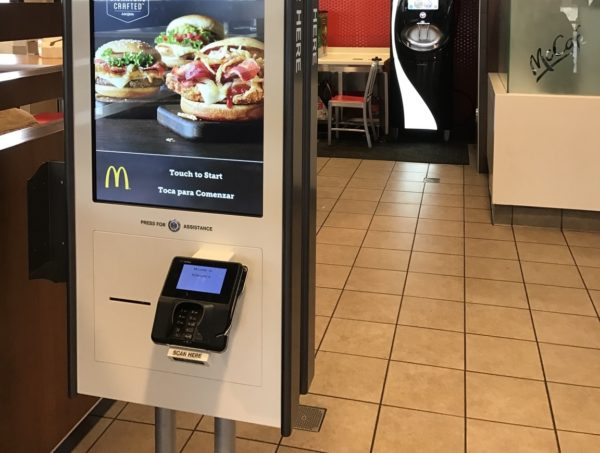 Welcome to the automated future. Marshall Brain wrote about it in a novella called Manna in which a cynical future automates work, and then does away with work, and promptly has difficulty figuring out what to do with itself as its population blooms:

Manna was connected to the cash registers, so it knew how many people were flowing through the restaurant. The software could therefore predict with uncanny accuracy when the trash cans would fill up, the toilets would get dirty and the tables needed wiping down. The software was also attached to the time clock, so it knew who was working in the restaurant. Manna also had “help buttons” throughout the restaurant. Small signs on the buttons told customers to push them if they needed help or saw a problem. There was a button in the restroom that a customer could press if the restroom had a problem. There was a button on each trashcan. There was a button near each cash register, one in the kiddie area and so on. These buttons let customers give Manna a heads up when something went wrong.

At any given moment Manna had a list of things that it needed to do. There were orders coming in from the cash registers, so Manna directed employees to prepare those meals. There were also toilets to be scrubbed on a regular basis, floors to mop, tables to wipe, sidewalks to sweep, buns to defrost, inventory to rotate, windows to wash and so on. Manna kept track of the hundreds of tasks that needed to get done, and assigned each task to an employee one at a time.

Manna told employees what to do simply by talking to them. Employees each put on a headset when they punched in. Manna had a voice synthesizer, and with its synthesized voice Manna told everyone exactly what to do through their headsets. Constantly. Manna micro-managed minimum wage employees to create perfect performance.

The story is a fun parable of unintended consequences: humans see imperfection, improve on imperfection, and then realize they have made themselves obsolete. The only flaw in this story is that some people remain gainfully employed when the society in this quasi-realistic fantasy world has enough technology to delegate everything lower than Emperor to the machines.

Another view of the future is this: we return to the past. Namely, we need a time where people serve roles instead of being employed to do tasks. That means people are in curatorship positions, or stewardship positions, over various places and parts of life. These things might be able to be done by machines, but the real question is how society separates the useful from the non-useful, and that question is addressed not by employment, but by seeing who can be responsible, intelligent and wise enough to maintain aspects of civilization. Those must survive, and the rest must fall by the wayside; this is currently a task fulfilled (poorly) by our Communist worker’s society combined with a Gordon Gekko consumerist insanity.

This type of society will necessarily be ruled by culture which mandates certain roles which are more important than their measurement in terms of efficiency and economic necessity. They are things which should always be there, and always have been there, barring the modern interruption. Under this system, every piece of land has a caretaker, especially the wild land, and every social function has someone delegated to do it, in exchange for which they receive payment that allows them to survive. It is like capitalism, but with economic goals replace by cultural, moral and philosophical ones.

Either that, or we can wait around for the automated soulless future and machine existence posited by Manna.

Work Destroys Wisdom | “Thermodynamics has won at a crawl.”