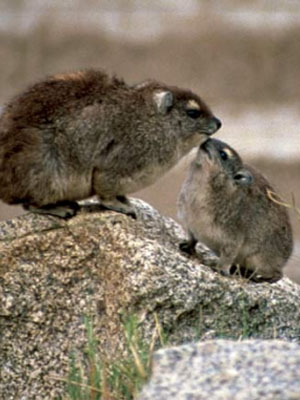 Not much. Lemmings are sweet little furry balls that tunnel under the arctic tundra, and provide a food-source for just about everything else. Being so low on the food chain, they have the ability to reproduce at an astonishing rate, and this is why they are not extinct. They are important. Not because of what each individual is, but because of what their hordes represent. Food!

Some years ago, Disney funded a documentary, featuring a cast of not very many tame lemmings. The magic of the camera made it seem as if there were millions of the creatures, and that they were hell-bent upon mass suicide. Which, in reality, they were not.
The producers of the documentary herded the lemmings towards a precipice, and filmed them as they fell off. Today, they could not have got away with such mass-murder, but that was probably the first time anything like that had ever happened, and so it pre-empted the attentions of all the animal-rights activists that would follow.

But there is an interesting metaphor in all of this.
Imagine a million lemmings. A huge crowd. Surrounded, all each can see, is the ground, whatever grows upon it, that is edible, and other lemmings.
When there is nothing edible left, each lemming grows restless, and this restlessness infects the whole. The only input left for the constituents of this herd is lemming-stuff. The world, at large, has ceased to exist for them. It is now replaced with lemming-feelings, lemming-needs, lemming-desires, lemming-think, lemming-reactions leading to…
Lemming-movement.

A huge crowd, then, tightly packed.
Like any tightly-packed thing, the bulk of it is on the inside, leaving very little of itself on the outside. If it starts to move, only the leading outsiders can see where it is headed. These leaders can only start the movement, but pressed by the crowd behind, who blindly follow, they soon can no longer stop it. Only the sides have any volition, at this point. Those who by choice, or by fate, end up on the edges. The very few.

The world, at large, contains precipices. Cliffs, chasms, ravines, rivers, oceans.
Sooner or later, this moving herd will encounter such a phenomenon, and what then? The leaders – too late – may see it coming, but can not stop the herd. The herd never even see it coming. While the thin line of the sides may be able to decide in time, or not, to keep following, or save themselves.

Exposed to nothing but group-input, each individual becomes a non-individual. A component of the group. It soon becomes unable to do anything but whatever the group, as a whole, is doing. It ceases to have choices. In fact, the group itself, by its nature, ceases to have choices. It may start something, but will then be unable to stop it. The only thing a group can reliably do, is be a group.
It works well, for a while.
While there is no mortal threat, the group survives. But it is unable to avert impending disaster, when, at length, disaster impends.

I’ve aways been an outsider. Always will be, now.
I can not say why I am, have been, and will be.
Probably it was not a choice, initially, but now it is.
Crowds give me the screamin’-‘ab-dabs!
I’m really not much like a lemming, at all.
Are you?