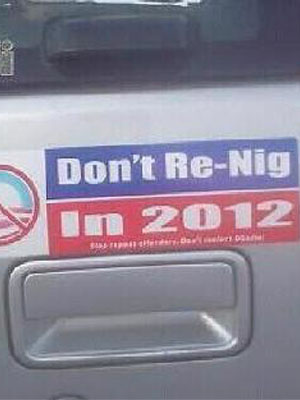 Political season brings out the worst of the cheerleading. Instead of finding out what would really work for our future, we identify with our teams and then find a compatible belief, and insist that it instead should be our future.

From this gnarly dichotomy no resolution can come. The goal of the participants is not to resolve anything; it’s to keep fighting. They’ve put all of their energy into being on the right team, and now they want to reap the rewards. Even if they lose, being “right” quickly replaces being realistic.

As a result, we see emotional outbursts disguised as political activism. One example can be found in the bumper sticker to the right. A veiled sentiment is expressed: if 98% of black people can vote for Obama, can white people have their own candidate too?

But there are two problems. First, this sticker is offensive because it is crude, inarticulate, and not forthright. You shouldn’t hint at political ideas or use cute slogans; say what you mean. Second, this sticker is destructive because it advances our dysfunctional politics in lieu of a solution. In fact, its presence blocks discussion of the very issue that both “sides” want and need to talk about.

Playing on the word renege, which means to go back on a promise, undertaking, or contract, according to Merriam-Webster, the ever-hateful anti-Obama masses seem to have come up with yet another way to disparage not only the President, but also African Americans. – “Racist Obama ‘Donâ€™t Re-Nig’ Bumper Sticker Photographed,” by Abena Agyeman-Fisher, News One

According to the Merriam-Webster and The People’s Dictionary, “renig” is a synonym for “renege,” meaning to reverse on a promise. However, the hyphen makes it clear the emphasis is on the “nig,” which may be shorthand for a rather well-known racial epithet.

Response on Facebook — well-known for being a cross section of America’s most productive and intelligent citizens — was harsh, with people calling for vandalism of the car, violence and murder against the owners of the car, a boycott campaign against the printer who contracted for the sticker, and trying to find ways to stop payment to those who sell these stickers.

As mentioned above, the first problem with this sticker is its method. Puns on racial slurs will do nothing but polarize, and are a crude and unnecessary to express a simple idea. If you oppose Obama, you can simply say that. “NO to Obama.” Any more than that is cheerleading and will lead to smaller versions of the same problems brought on by this bumper sticker.

The second problem is more insidious and rests in the goal of this act. By not saying what you actually want to say, you’ve destroyed dialogue, and you’ve allowed the other side to obliterate any discussion by focusing on the method and not the substance of your political intent.

You could say, “Diversity itself is the problem, not its ingredients. Because it forces cultures to dissolve or remain in perpetual outsider status, it assimilates all of us to a lowest common denominator in which no one is happy. With the loss of social identity comes a loss of social order and culture, which leads rapidly to a police state as society gets more anarchic. History shows us that regardless of race, diversity does not work. It does not work among whites (Ireland, Russia, Belgium) and it does not work among blacks (Rwanda, Somalia, Zimbabwe). Diversity does not work in any form, whether of religion, culture, heritage, language or even political viewpoint. It results in endless infighting. The problem is not the different groups thrown together by diversity, but diversity itself, which we can see by its long record through history of failing wherever it is tried.”

The above statement is far more groundbreaking and polarizing than a racial slur. A racial slur is easily written off and the infighting begins again. A reasoned argument forces your opposition to either come up with a counterargument or be seen walking away from a logical, mature, unemotional dialogue. To walk away is to concede, under those circumstances.

People who keep the infighting alive are cheerleaders pulling for their favorite teams. They do this first to feel a sense of social identity, and second in the desperate hope that by doing so they will keep their civilization alive. Their secret fear is that society as it exists is unworkable and that no amount of political cheerleading will save it.

Unfortunately, by doing that they also endorse the system that is obviously not working for them, either. And so the cycle goes on, with no hope of an answer, and in place of an answer, nothing but the long inexorable decline into irrelevance and failure.