by Jonathan Peter Wilkinson on November 13, 2018 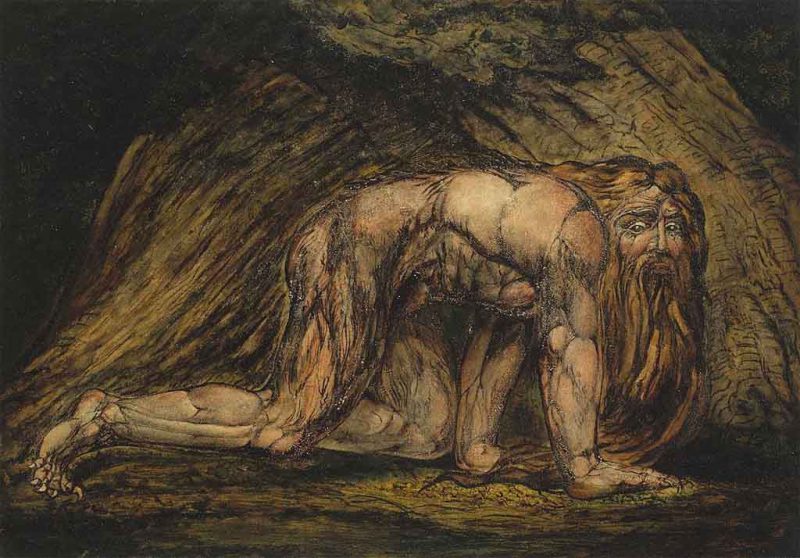 Behold, I will send for all the tribes of the north, declares the Lord, and for Nebuchadnezzar the king of Babylon, my servant, and I will bring them against this land and its inhabitants, and against all these surrounding nations. I will devote them to destruction, and make them a horror, a hissing, and an everlasting desolation.
–Jeremiah 25:9

Success and comfort weaken the men of a nation. In the case of the ancient Kingdom of Israel, they had it too good under Solomon. The outsiders, the scraps and those who dine out of dumpsters can smell this rot on the wind. Eventually, a great man will arise and organize them into a battering ram aimed at the rich and the spoiled. Israel, meet Nebuchadnezzar.

Nebuchadnezzar II, sometimes alternately spelled Nebuchadrezzar, was king of Babylonia from approximately 605 BC until approximately 562 BC. He is considered the greatest king of the Babylonian Empire and is credited with the construction of the Hanging Gardens of Babylon. Nebuchadnezzar is mentioned by name around 90 times in the Bible, in both the historical and prophetic literature of the Hebrew Scriptures. Nebuchadnezzar receives the most attention in the book of Daniel, appearing as the main character, beside Daniel, in chapters 1–4.

Nebuchadnezzar is mentioned ninety times because that’s approximately equal to the number of times he jammed his foot up the Jewish Army’s rectum in the process of stomping them all new mud holes. It was about as even a fight as the Polish Horsed Cavalry versus The German Panzers. The military conquest is boring in the sense that University of Alabama football games are boring this fall. What was fascinating, was how Nebuchadnezzar attempted to end the JQ once and for all, several hundred years before the birth of Christ.

Nebuchadnezzar had several routes to cultural exsanguination for Jews. When he conquered a place, he laid to waste all of the public monuments of the prior culture. In 586 BC he took down Jerusalem. He leveled the Temple of Solomon as if it were a statue of Robert E. Lee in Baltimore, MD. He also took all the smart, motivated and attractive people out of Jerusalem and marched them off into captivity.

Nebuchadnezzar defeated the Cimmerians and Scythians [see Tribes of the Steppes] and then turned west, again, conquering Western Syria and destroying Jerusalem, including the Temple of Solomon, in 586. He put down a rebellion under Zedekiah, whom he had installed, and exiled more Hebrew families. He took the inhabitants of Jerusalem prisoner and brought them to Babylon, for which reason this period in Biblical history is referred to as the Babylonian captivity.

So Nebuchadnezzar intended to exterminate Jewish Culture by taking any Jew worth a few sheckels and turning them into a good Chaldean Bureaucrat.

3. And the king spake unto Ashpenaz the master of his eunuchs, that he should bring certain of the children of Israel, and of the king’s seed, and of the princes;
4. Children in whom was no blemish, but well favoured, and skilful in all wisdom, and cunning in knowledge, and understanding science, and such as had ability in them to stand in the king’s palace, and whom they might teach the learning and the tongue of the Chaldeans.
5. And the king appointed them a daily provision of the king’s meat, and of the wine which he drank: so nourishing them three years, that at the end thereof they might stand before the king.

The old Jewish culture of Moses, David and Solomon was declared to be anathema. Lots of stories of Lion’s dens, dream interpretation, and fiery furnaces came next and Daniel won out, but the old blueprint for cultural evisceration remains intact and is being employed against non-liberal Whites in Amerika today. Nebuchadnezzar’s horde-in-waiting consists of the Amerikan Leftists. They overwhelmingly believe White People need to be disempowered and chased from American life. They further believe these people are morally inferior and shouldn’t even be allowed to marry into their families.

Many Americans think people in the other party are ignorant, spiteful, evil and generally destroying the country, according to a new Axios poll by SurveyMonkey, aired on HBO on Sunday night. 61% of Democrats see Republicans as “racist/bigoted/sexist.” 31% of Republicans say they view Democrats in the same light…..The suspicion runs so deep that a third of all Americans say they’d be disappointed if a close family member married someone whose partisanship didn’t match their own, according to the poll for “Axios on HBO.”

Our colleges and universities increasingly invested in training our version of good Chaldean Bureaucrats. UCLA sets an example of how you force the worship of !DIVERSITY! You must pledge allegiance to it and show a record of mentoring minorities and women if you want a job. Here’s how they make having too many white males in a graduate student class a career death sentence for an academic who doesn’t have tenure yet.

Mathematicians who want tenure at UCLA have to do more than show a facility with numbers. They also have to pledge in writing a commitment to diversity, equity, and inclusivity. In fact, all professors applying for a tenure-track position at UCLA must write a statement on their commitment to diversity, showing, for example, their “record of success advising women and minority graduate students,” according to the UCLA’s Office of Equity, Diversity and Inclusion. Such mandated statements reflect a push by college bureaucrats “to ratchet up the requirements” to achieve more diverse campuses, said Peter Wood, president of the National Association of Scholars. Until recently, diversity programs tended to focus on mandatory training and sanctions for policy violators. Now “you have to make a public confession of faith,” said Wood. “You’re essentially citing a creed,” and “all the more effectively, they force you to put that creed into your own words.”

The Left becomes increasingly invested in and empowered by the Moldbuggian Cathedral of institutions conquered by Gramscian convergence. The bugmen, bagmen, and cat ladies run the bureaucracy. The NPCs now just need to be programmed by the correct evil genius. Much of the institutional right is no more White-Friendly. When mixed-race neocuck Kevin Williamson foamed off at the mouth at “The Father-Fuhrer,” he was not morally encumbered in the least when he talked about whose communities needed to die. Kevie-Kev can blissfully ignore what happens to the people who live in the communities that conveniently dirt-nap on behalf of Williamson’s “New Conservatism.”

But, if you are like me and won’t be joining Kevie-Kev for one of his penis lattes with lots of whip, then you probably live in just the sort of community that The Cuck Right and the Crazy Left both want to see exterminated. In order to make an adequate living in a professional career, your children need to attend a university that deliberately and systematically attempts to indoctrinate them with a profound hatred for everything that you and your family truly are.

Once this dyspetic horde of human wreckage finds its Nebuchadnezzar, they will come for you with a malignant vengeance. We the remnant can organize, evangelize to our cohort the threat we are now under, and prepare with a hardening rigor. If we fail, then we can read what happens next in a later segment of the Old Testament known appropriately as “Lamentations.”