The standard leftist “narrative,” or explanation of reality contrary to the facts, is that a vast right-wing conspiracy controls all business, media and social functions. You must rebel against this, or you’re part of the enemy.

They like to claim that this right-wing conspiracy loses sleep at night trying to find new ways to target minorities (religious, racial/ethnic, and cultural) and non-conformists (freaks, geeks, perverts) under the guise of them being criminals. It implies that if they get the ice pick, you’re next.

Further, the leftists like to claim all of this while working in media, a field that is notoriously 3/4 left-leaning and hostile to conservative ideas, except on a few isolated standouts that have conservative leanings — but are the true minority in the news.

Witness, for example, the pretentious and sanctimonious merchant of moral righteousness, Glenn Greenwald, at work:

As I wrote three different times here, both the perpetrators and their motives are unknown, and none of the points I made — which relate exclusively to the reaction to these attacks — are changed in any way based on the identity of the perpetrators. Except that I would add one point about Western reaction if indeed it turns out to be a domestic rather than “terrorist” (i.e., Muslim) attack: American interest in these attacks and the desire to be seen publicly denouncing them will quickly diminish — almost to the point of non-existence — if the perpetrators are not Muslim. – Salon

There is the claim: American interest…will quickly diminish…if the perpetrators are not Muslim

24 hours later, which is an aeon in the fast-paced news cycle — especially for only 100 dead — here is the reality. These are America’s top ten national newspapers, as ranked by circulation: 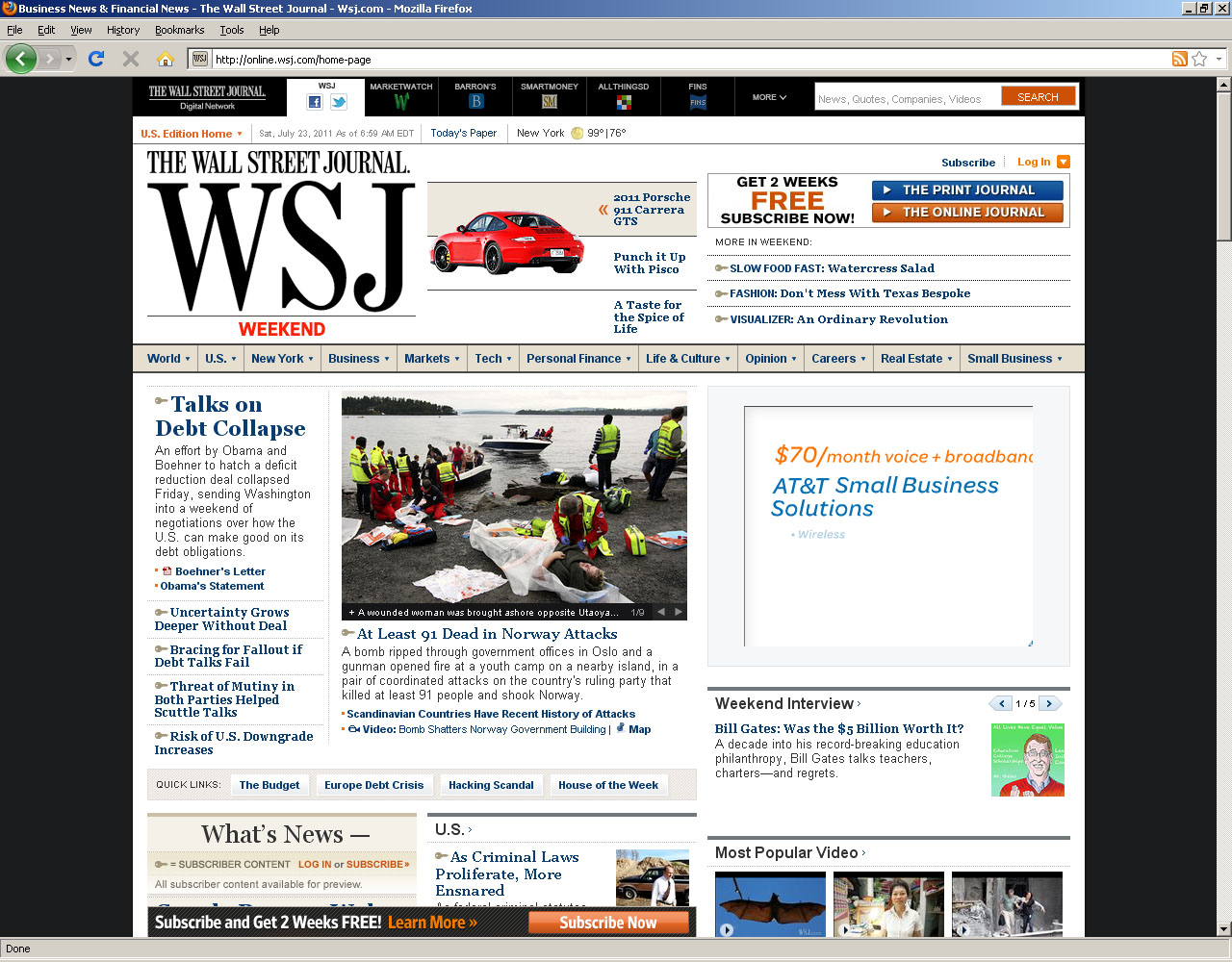 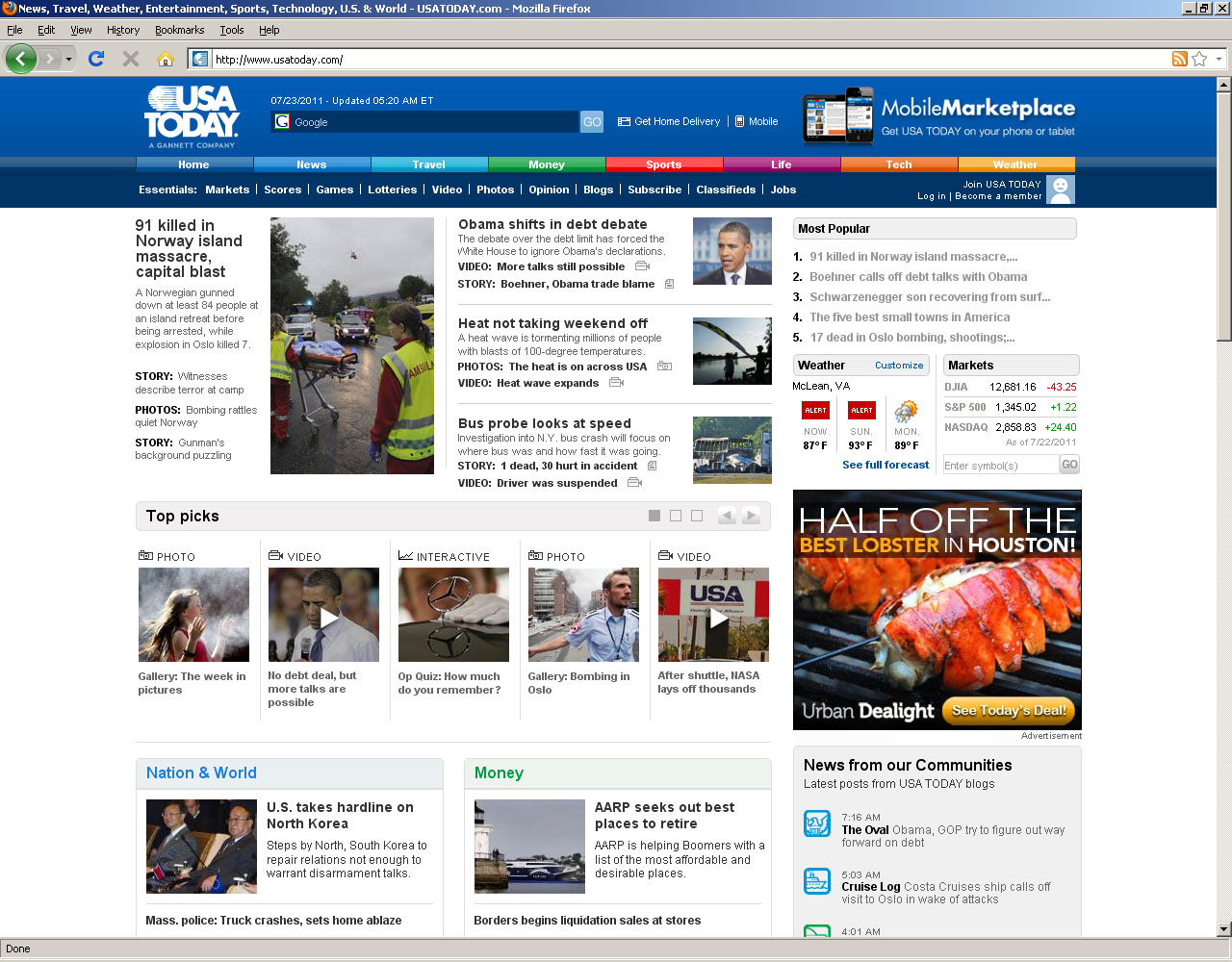 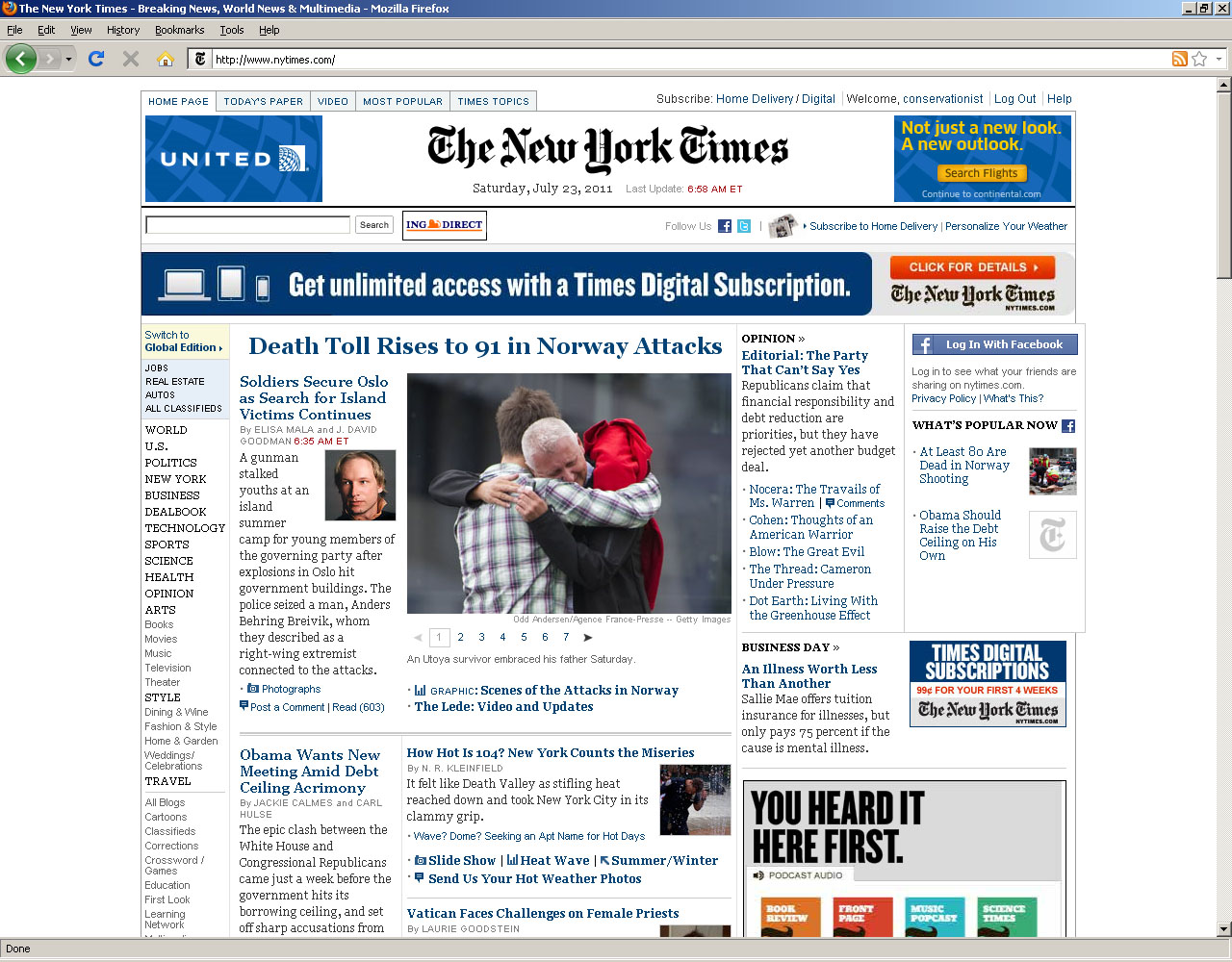 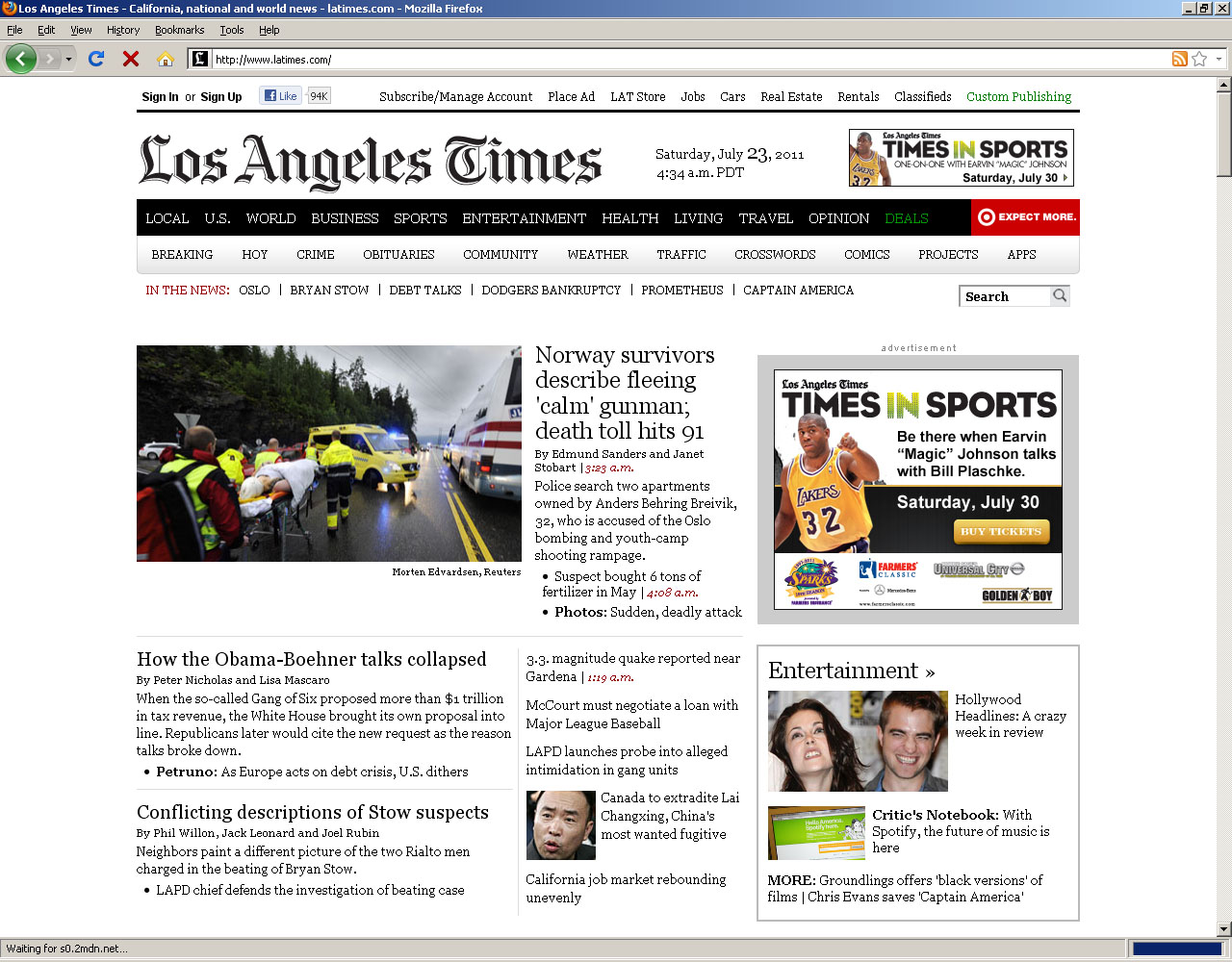 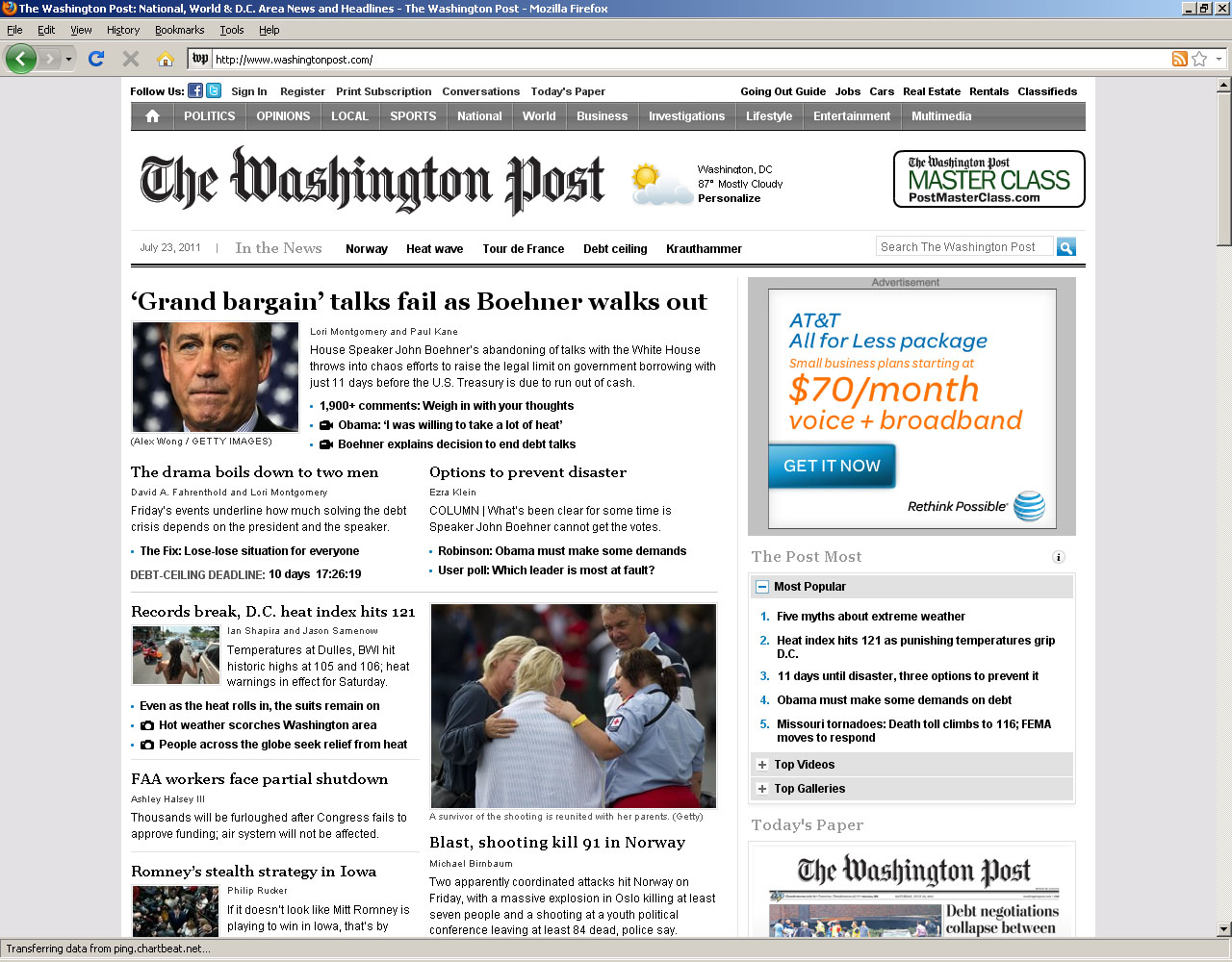 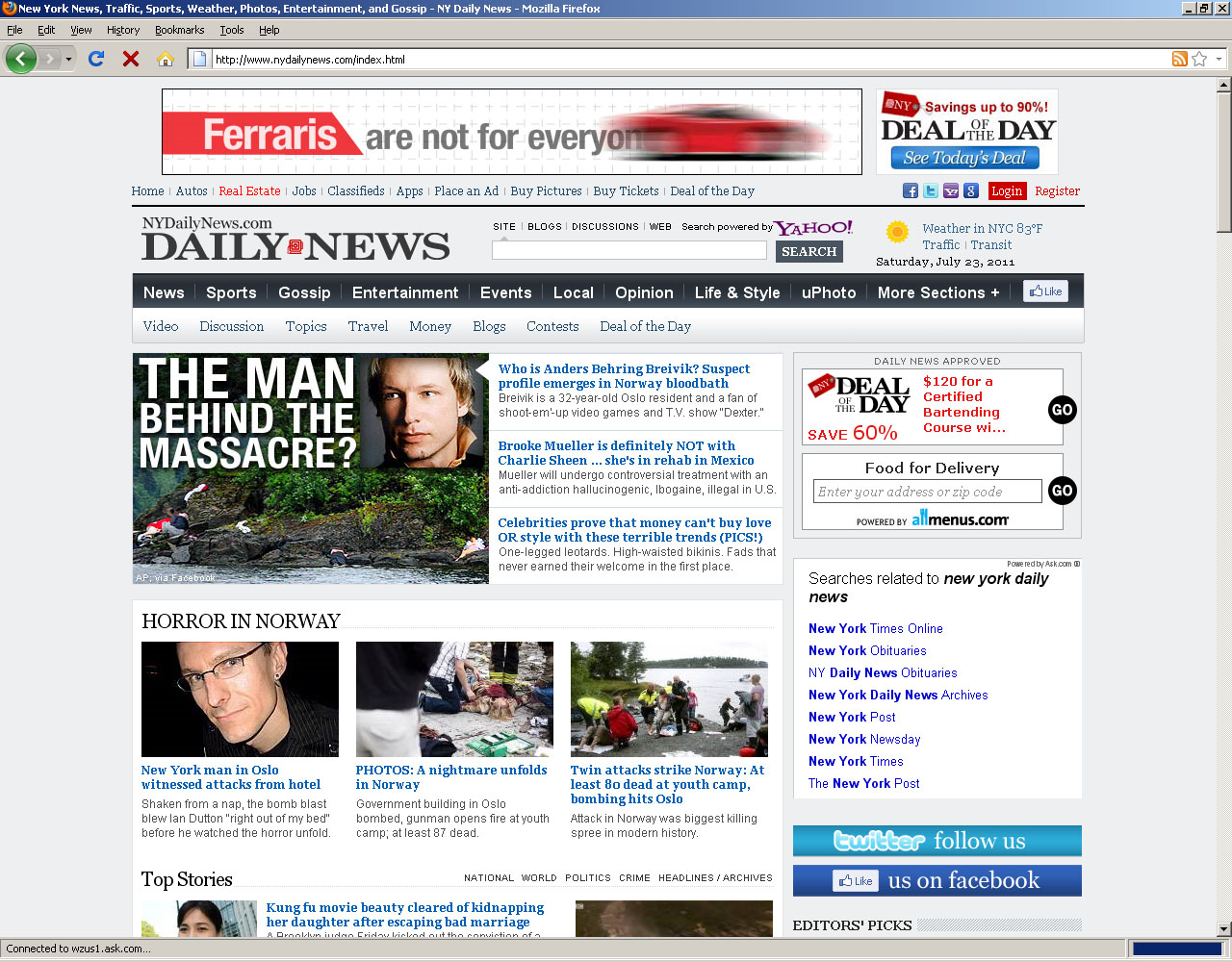 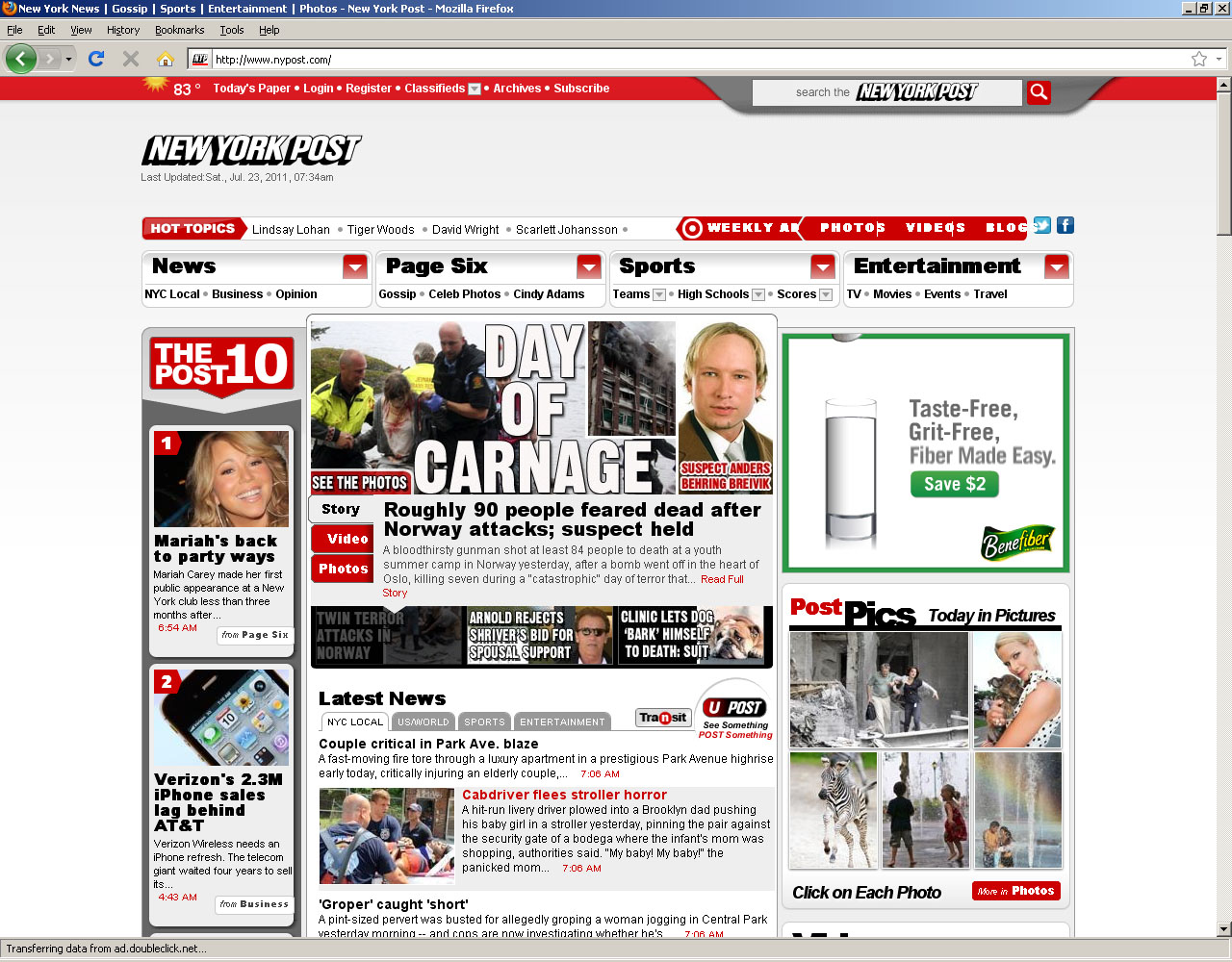 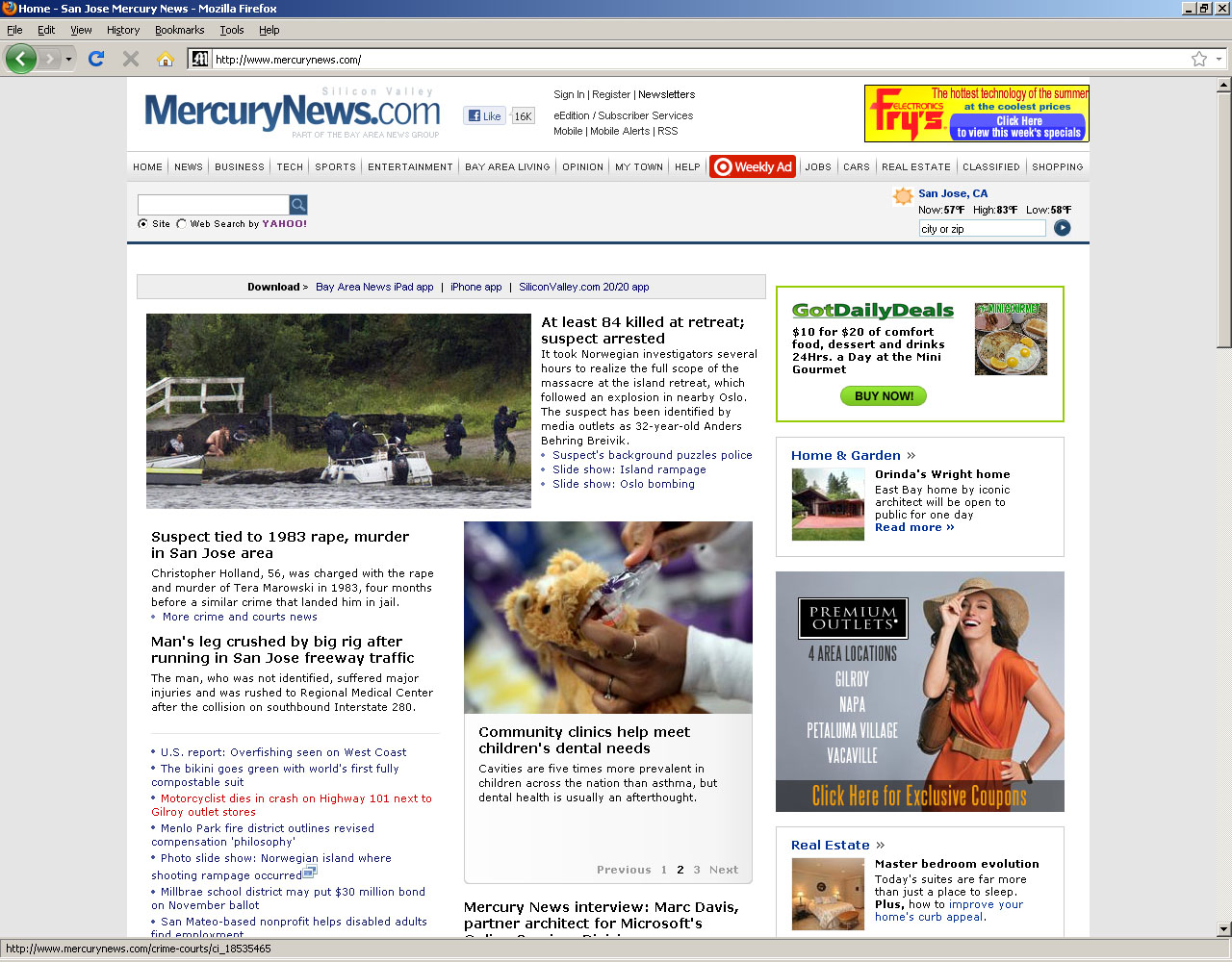 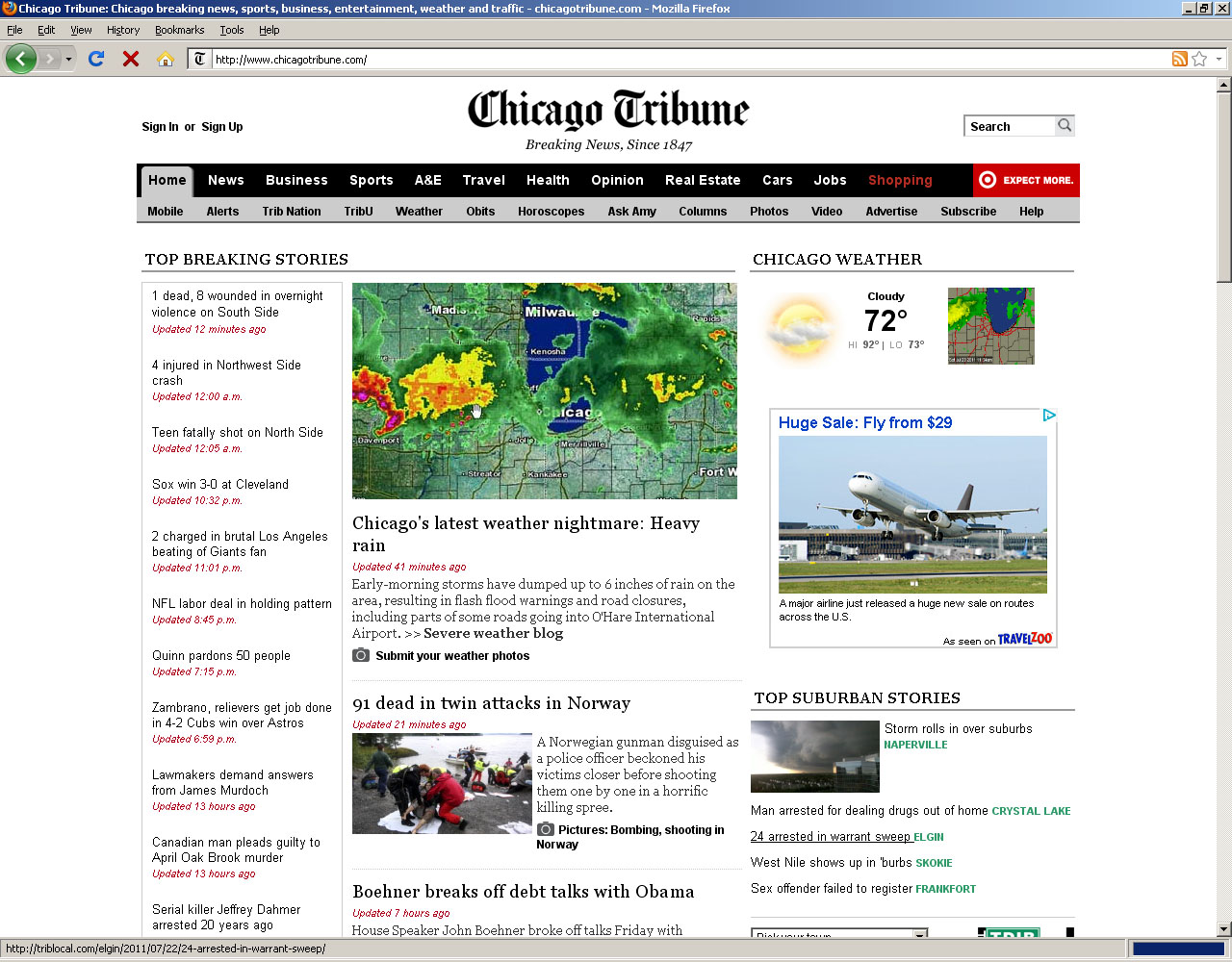 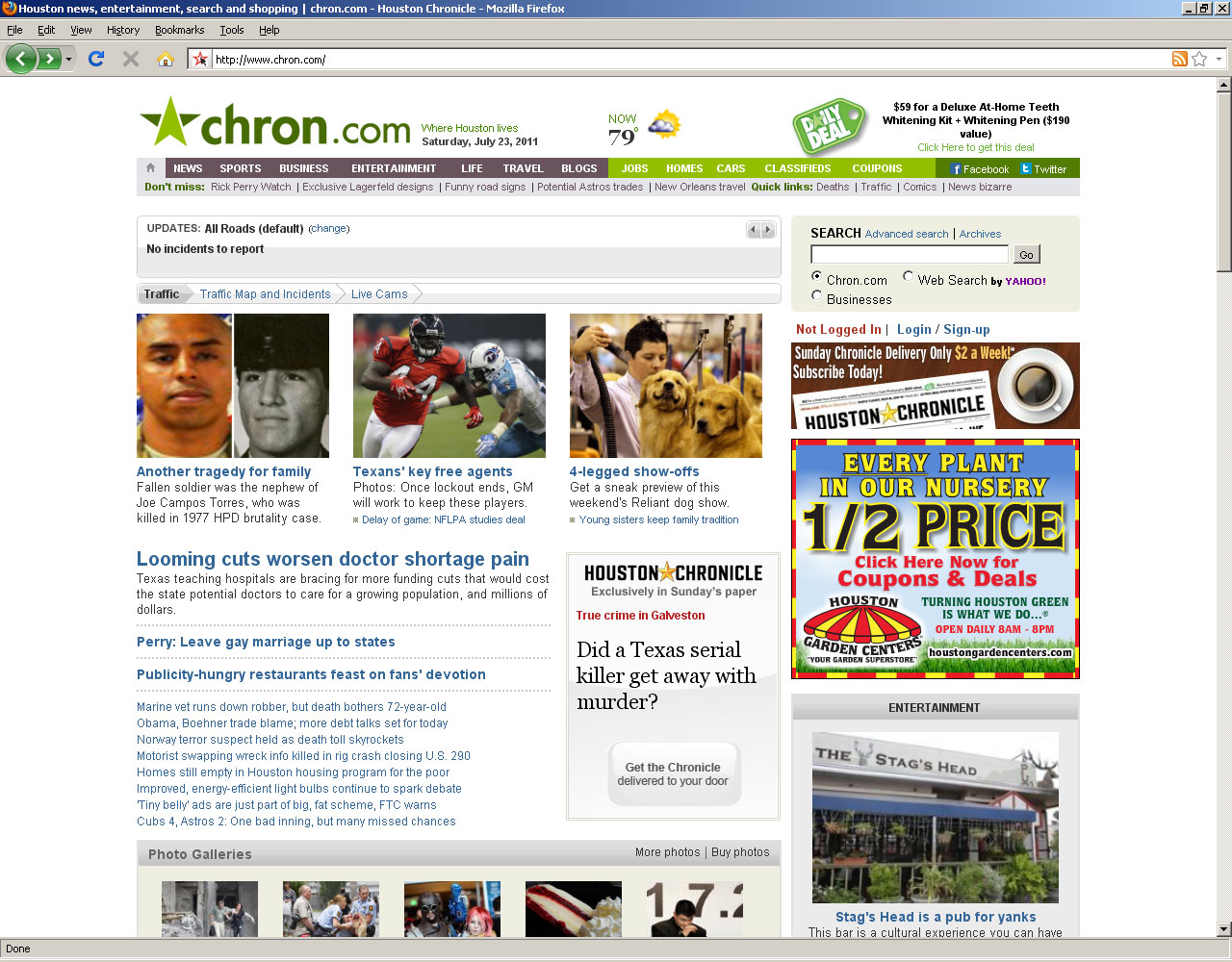 As we can see, 9/10 feature it as their lead story — after it was discovered that the perpetrator was not Muslim (original reports suggested that a jihadi organization had claimed responsibility, but this is misleading as in almost any bombing, numerous organizations claim credit in order to make the news, and news organizations are obligated to report the credible ones). The Houston Chronicle is the only one that bumped the story, probably because of the local interest story — soldier killed in Afghanistan is nephew of man in police brutality case — that is big local news.

I remember being shocked by how quickly the Mumbai terror attacks dropped out of the news, and even the al-Qaeda bombings in Bali fell away. Here we are a full news cycle later and the frenzy is going strong. Glenn Greenwald must have “mis-spoken.”

Notice in fact the opposite reaction:

Norwegian media reported that the suspect belonged to an extreme right wing group, calling himself a “nationalist,” and had at least a Glock pistol and machine gun registered in his name. He allegedly ran a company, GeoFarm, involved in farming “vegetables, melons, roots and tubers,” and would have had access to chemical fertilizers used in bomb-making.

He allegedly bought several tons of fertilizers earlier this year.

Andersen said the suspect posted on websites with Christian fundamentalist tendencies. He did not describe the websites in any more details. – CBS

They were sure to get this one in:

Police chief Svinung Sponheim said that internet posting by Breivik suggested he has “some political traits directed toward the right, and anti-Muslim views”.

Police officials have also said that the suspect appeared to have posted on websites with Christian fundamentalist tendencies.

The Norwegian newspaper Verdens Gang quoted a friend as saying that the suspect turned to right-wing extremism when in his late 20s. The newspaper also said that he participated in online forums expressing strong nationalistic views. – The Telegraph

Although I’d love to jump all over the media for its coverage so far, this is about consistent with what happens when an Islamic terror suspect is unmasked — with one exception, albeit an understandable one. Non-white suspects are never described, but white ones always are, because they are not what is expected. I can’t fault our media for that one although it is not a direct parallel between the cases.

Regardless, we’re not seeing what the leftists are claiming we’re seeing. The media has not moved on, and in fact are moving in to make a bigger deal of the fact this guy is not a Muslim. It is interesting to me how we all inhabit the same planet, but radically different realities.

Poison | The consequences of political correctness