Leftists Bully Richard Spencer’s Mother For Their Own Profit

Tanya Gersh, a realtor in the Whitefish, Montana region, decided to join the Leftist herd and attack Richard Spencer’s mother — by attacking a property she owned from which profit could conveniently be made. As Sherry Spencer writes:

On November 22, Gersh and I spoke on the phone. She relayed to me that if I did not sell my building, 200 protesters and national media would show up outsideâ€Šâ€”â€Šwhich would drive down the property valueâ€Šâ€”â€Šuntil I complied. Gershâ€™s other conditions included that I make a public denunciation of my son in a statement written by the Montana Human Rights Network and that I make a donation to this organization from the sale of the property. As Gersh announced on Facebook, she was â€œspear headingâ€ the campaign.

Gersh followed up on her conditions in a number of emails, which Iâ€™ve just made public. She even shamelessly suggested that she act as my realtor! In other words, she and the local â€œhuman rightsâ€ organizations appeared to seek financial benefit from threats of protests and reputation damage.

This is a classic liberal hijack: we have a pretext to seize your stuff because you have offended the Crowd, and therefore, we are going to do so in a way that benefits us. They are simply parasites; the “human rights” nonsense is merely a photo opportunity and a justification for then going on the attack.

Even looking at the websites suggest that these organizations are a scam: peace symbols, hearts and buzzwords. They sell a product called “moral pretense,” and it allows lonely and lost people to claim their lives are important because they are “different” and “good,” even though actual goodness would require fixing their personal disaster lives. But the product sells.

In the Leftist arc, the Tanya Gersh attack does not represent desperation, but disintegration. There is no longer enough motivating force to hold them together toward an actual goal, so instead they are content to be used by business for the purpose of personal profit. While their attack appears stronger than ever to outsiders, it suggests that there is weakness within.

None of this will stop them from terrorizing Sherry Spencer. She took the sensible, Trump-style approach to Leftist attacks, which is: never apologize, do nothing, and tell them they are insane. Notice the arrogance with which Gersh has proclaimed that the sale is a done deal: 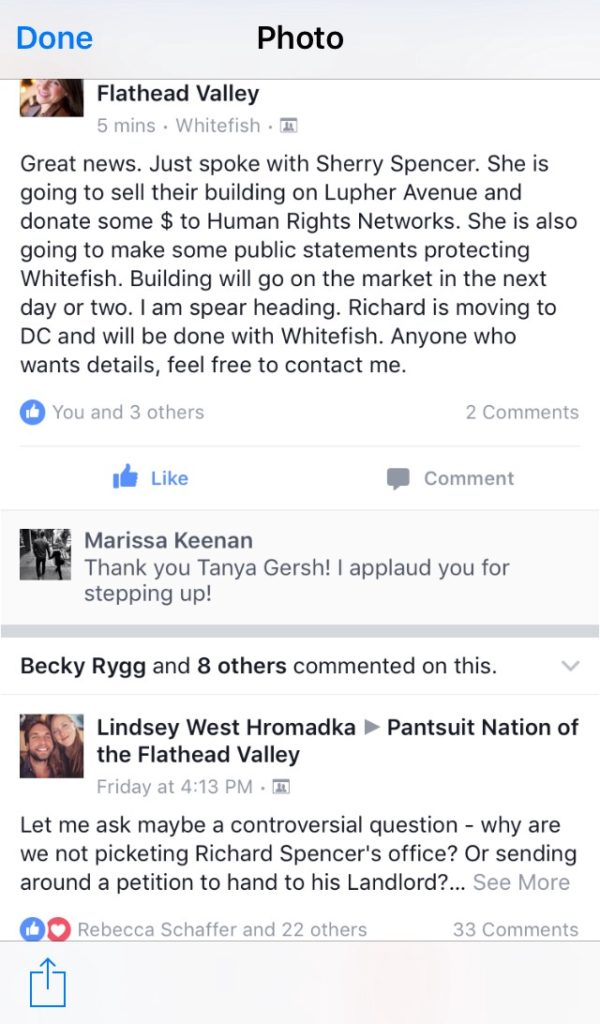 And then how the media spin which allows two people with financial interests in the situation to speak for an entire community:

But Whitefish residents aren’t buying it.

“She is profiting off of the people of the local community, all the while having facilitated Richard’s work spreading hate by letting him live and use her home address for his organization,” local realtor Tanya Gersh said.

“I don’t know what she’s talking about,” Albert said. “We don’t cause financial harm to anybody.”

Both Albert and Gersh have motive to profit from this event as it draws attention to their businesses, Gersh in real estate and Albert as a writer who gives seminars on aging with grace.

They have been agitating against Spencer for some time, which has enabled them to become local mini-celebrities: 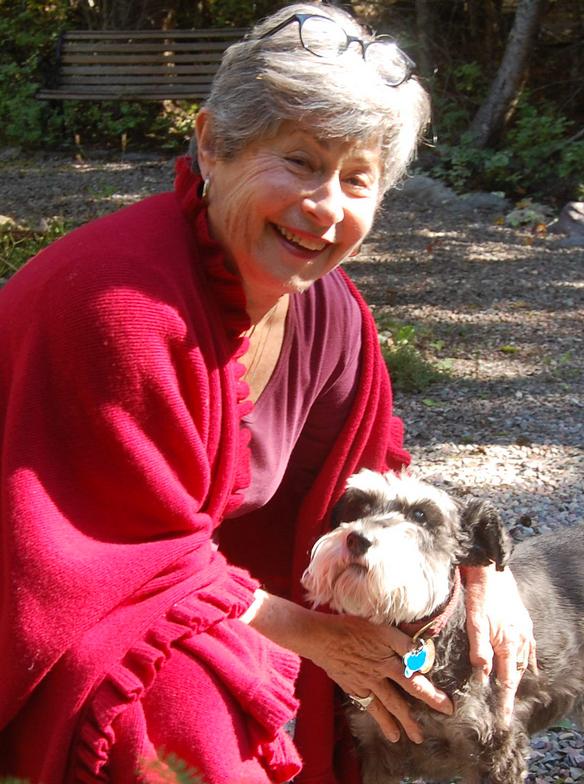 â€œWe fought so hard two years ago (for the anti-discrimination resolution) when he first reared his head,â€ Albert said.

But, she added, â€œseparatism can only grow if the soil is receptive to prejudice. Truth, love and kindness will always win out if our community can find ways to accept and validate each othersâ€™ liberties and freedoms.â€

Spencer and his mother are public figures, but also people who have a right — by the same language these “human rights” groups use — to enjoy their property even if they disagree and live a different lifestyle entirely than others. Because they are insane Leftists, the human rights types conveniently make an exception and speed themselves toward profit by using their presumed good public appearance.

Here is how to contact the people who support the people involved in this extortion scam:

A sample email to the Board of Realty Regulation:

I write to you to complain about the actions of Tanya Gersh, a licensed realtor in Montana.

She is attempting to extort money from one of your citizens by threatening political protests, as described here:

This conduct is unbecoming of someone in a respected and trusted position such as a realtor, and I encourage you to take action to revoke Ms. Gersh’s license.

Thank you for listening.

This type of bullying should be resisted no matter what your political stripe is. It reduces politics to profiteering and silences those who might have dissenting opinions, at the hands of wealthy and coddled members of a community at the expense of that community.

Notice that the Leftist always accuses you of what they are doing, as seen in this statement by Gersh:

Itâ€™s a new building in Whitefish’s downtown historic district. First owned by Richard Spencer, and now owned by his mother, Sherry. There are vacation rentals on the top floor, businesses lease at street-level.

But Sherry says her son’s political views – – and his detractors – – are forcing her to sell the property. In an email to us, Sherry says, “As painful as this is, I am exploring a potential sale of the building.”

One of those detractors is Tanya Gersh, a prominent member of the community, who told me in an email: “She (Sherry) is profiting off of the people of the local community, all the while having facilitated Richardâ€™s work spreading hate by letting him live and use her home address for his organization.â€

Typical of Leftist attacks, this bullying is designed to silence, cow and wreak havoc upon those who dare go out of step with what the herd wants to think. The only solution is to push back, denying their attempts to parasitize, and also call them out on their bad behavior and hold those who support them accountable for enabling bullying under the guise of (obviously insincere) ideology.

Why the Right Needs Feminism | Outliers (#36)