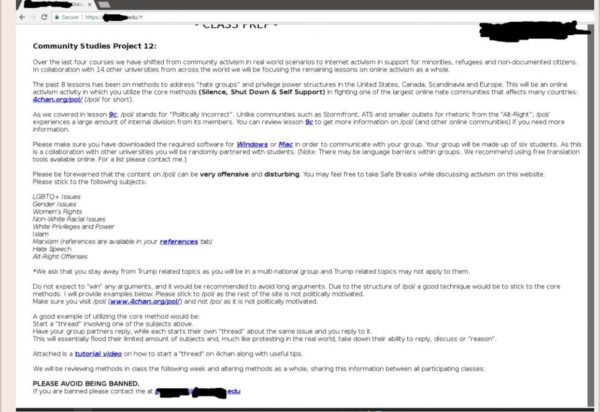 This unverified image shows a Leftist professor coordinating students as a shill attack force against 4chan’s /pol/, widely regarded as one of the last communities of independent (i.e. non-Leftist) thought on the internet.

As is typical in academia, Leftists got into power and hired only other Leftists, who now hire only other Leftists in turn, resulting in a massive echo chamber in all of academia. As a result, professors who go “extreme” get a wink and a nod, and if they get fired, quickly get rehired.

For this reason, and the fact that academia was oversold by politicians as a magic entrance to the middle class, professors face almost no oversight so long as they are preaching the good progressive dogma. This results in do-nothing classroom activities like those in the image above.

If the West is to shrug off Leftism, it must get the parasitic fingers of government out of education, which it uses to create the next generation of True Believers.