Leaping Across the American Geopolitical Chasm

Geoffrey Moore wrote a book named Crossing the Chasm in 1991 which made him an example of American civilizational success because he was able to synthesize history into a model predicting the future. Because his clients were successful, the deduction can be made that his model is therefore successful and could quite readily be applied in wider applications such as National Health Care in the United Kingdom:

Predictive analytics is the art of analysing past data and trends in order to make predictions for the future. It allows you to anticipate future customer behaviour and adjust your business strategy accordingly.

Descriptive analytics, on the other hand, involves using data science to analyse events and infer processes and causality. For example, at Fast Data Science we were able to use AI explainability techniques to identify the features which increase the likelihood of employee attrition in the National Health Service in our predictive model. We found that certain factors drove staff attrition in the National Health Service (such as length of service, age, employment and assessment history)

Prescriptive analytics is the science of using the insights from a data science analysis to drive business decisions. For example, in addition to describing the causes of staff attrition in the NHS, our report for management also made some recommendations for actions that can be taken at organisation level, which should improve staff retention. Prescriptive analytics in particular requires a good understanding of business processes and borders on management consulting.

What Mr Moore did was to provide a future view using a model applying three types of analytics which he called Predictive, Descriptive and Prescriptive. In the case of a public Health Service, the advice would focus on reducing staff resignations i.e., crossing the chasm to a staff complement in which the majority would be happy to work. In the case of a new start-up, the advice would focus on the technical product crossing the chasm to acceptance in the mass market and not just technically oriented people. 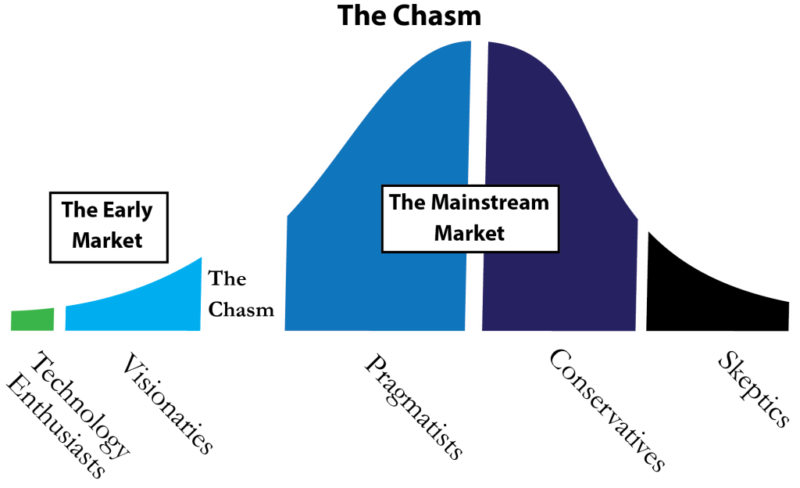 Of course, the same can be done with voters and American citizens, where the strange realization in 2021 is that uniparty politicians will use Mr Moore’s modeled advice, but for the wrong reason, because they want a dependent underclass. The “market” has changed.

This may come as a surprise to conservative people normally living in the mass market, that modern big data techniques make actual voting superfluous. In other words, they can drive elections anyway they want.

The second surprise may be that while America historically exemplifies economic success, that the future concept of Oligarchs supported by a mass market underclass getting just enough benefits NOT to resign, is the new success.

If you view this transformation as a mistake, then the above technique could also be applied precisely the same way, but on the current history data. In other words, ask Mr Moore to find a way to get the mass market to resign.

Unfortunately, there is a third surprise beyond visual range, which is that while the Russians have somebody like Alexandre Dugin guiding their future, America has only de-platformed intellectuals, one of whom is the already deceased Samuel T Francis.

These two intellectuals should really have come up with similar ideas, shouldn’t they? But there is a major difference between them which is that Francis is inward focused and Dugin outward focused. Francis incessantly wrote about America, while Dugin wrote about the world.

It is common knowledge that Americans don’t know the world map, only their own map. When they have their famous baseball or football competitions, they call it a “world” series. They literally think America is the “world.”

So, here is the fourth surprise, but this time within visual range, which is the 50 States Americans are so proud of. Living in an “independent” State provides a false perception of control allowing the normal American to think that some far-away Senator in Washington DC is irrelevant and to be ignored. In fact, not only that, but this also causes the average US citizen to be inward focused becoming literally ignorant of the implications associated with the “world.”

In 2021, American politicians and celebrities are using that mass market ignorance to their personal advantage, not yours. Americans now must jump across the chasm, but in reverse.