LD50 Gallery Debunks Its Attackers With Diagnosis Of Their Instability 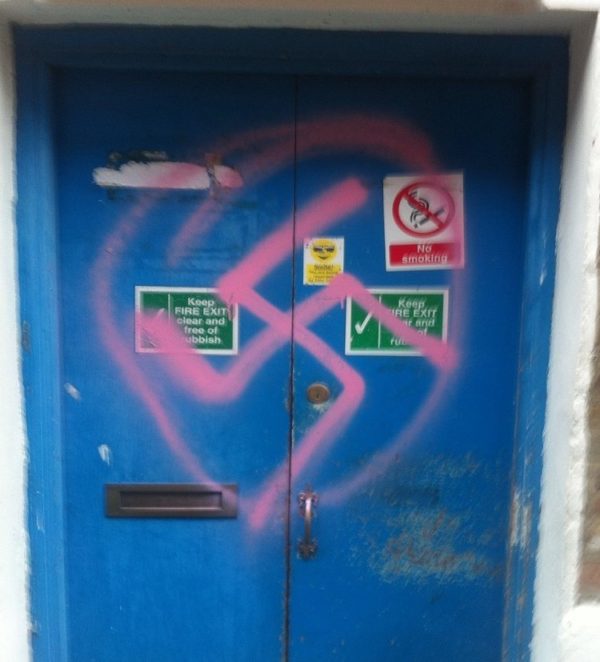 The London art gallery that hosted Neoreaction and Alt Right exhibits and is now under attack from deranged and angry Leftists, has posted a statement in which is diagnoses the unstable psychology of its attackers and reveals the importance of those exhibits in the first place:

We feel that the exceptionally aggressive, militant and hyperbolic reaction this has provoked vindicates our suspicion that at some point, as a society, we have drifted into a cultural echo chamber. A position on the left has become the only permissible orientation for cultural practitioners and apparently any who dare eschew this constraint are now publicly vilified, delegitimated and intimidated with menaces.

The attacks against us have come from a position of ignorance, fuelled by emotions that have ratchetted up a group dynamic that has, intentionally, obviated the possibility of rational interpretation.

Our position has always been that the role of art is to provide a vehicle for the free exploration of ideas, even and perhaps especially where these are challenging, controversial or indeed distasteful for some individuals to contemplate. We had thought that if it was to be found in any discipline, then art should have exemplified this willingness to discuss new ideas, but it has just become apparent to us that this sphere now (and perhaps for the last few years) stands precisely for the opposite of this.

The internet is achieving its promise of accelerating time to the point of collapse. What we are experiencing now is how history writes itself, how fears and ignorance come to dominate people’s minds, effacing the possibility of truth; how, in fact, a lie becomes a truth for the next person, how that new person uses this as the basis of another misinformed opinion to generate a further specious version of the truth and so on and so forth. As a result of this we are able to witness in real time how reality empties itself out, reconstellating in a structure of fears and lies that grows bigger and stronger to the point there is no return, and we are now inhabiting those new truths/ or so called “post truths”.

As an art gallery we try to explore contemporary discourse through a series of exhibitions and open discussions, by looking at our programme one can learn how diverse and enriching these have been over the last 2 years. In recent months we found ourselves increasingly interested in the political ruptures in the west: America and closely observed events there throughout the extraordinary and dramatic election cycle. This informed our last exhibition and our series of talks that were framed around the alt-right and NRx discourses. We presented a very liberal audience with a speaker knowledgeable of that sphere creating in that way a dialogue between two different and contrasting ideologies and the possibility for discussion between the speaker and amongst ourselves. In our exhibition we explored themes of memetics, the occult, male frustration, kek, artificial intelligence, algorithms..etc which are some of the topics currently faced by our generation.

Should you desire more information/justifications about our enterprise, please contact us on [email protected] or DM on twitter @kantbot2000

As usual, the Left is demonstrating intolerance not of opposition to them, but of any deviation from the groupthink. This is how civilizations destroy themselves: they bind themselves to illusions and punish those who notice, so everyone — wanting to personally succeed — affirms the groupthink and thus obstructs themselves from recognizing the decay and acting to fix it.

End days of Rome and Athens type stuff, in other words. We are humans among the ruins indeed, ruled by both an illusory ideology of equality and the consequent unleashing of commercial forces that has sapped our society of sincerity. When anyone mentions this, they are attacked, and this is why LD50 Gallery is under assault by these neurotic, selfish, pretentious people.