Krystal Ball Does Not See the Future of Affirmative Action

by Jonathan Peter Wilkinson on November 25, 2020 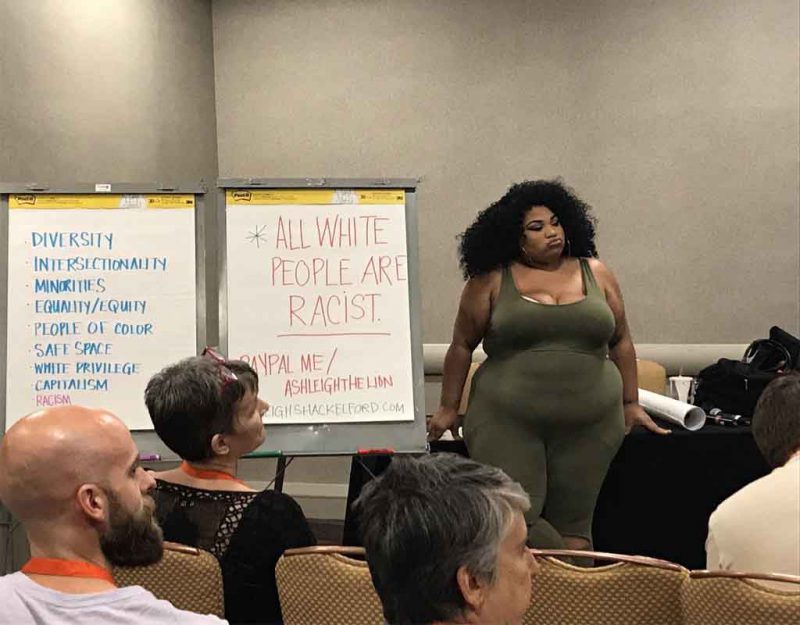 Krystal Ball has just admitted something big. Affirmative Action is about liberal projection. It’s not about real diversity, it is about pet diversity. Diversity that is similar to the lawn jockeys that the non-PC used to put out front as a decoration.

It’s a good first step for a progressive. Here’s why she gets one thumb up out of two.

Ball essentially calls them out for wanting to install a docile, bought-off Barack Obama for the Board of Directors but still send their kids to the “really good schools.” You know the really good schools. They’re like a nice, diverse bagel shop that accidentally seems to run low on the pumpernickel.

So yes, liberals want to love their diversity from afar. Absence makes the heart grow fonder. They’ll send them a food basket, but never have them over to dinner with their fair-haired daughter. This is why BLM will brutally hack them to pieces the day they get what is left of the Amerikan Right deplatformed and out of the way. A hard knee-grow like Stringer Bell just sees the Latte Leftist as a pig being fattened for the coming reap.

Here is where Krystal Ball fails to “call the ball.” She really thinks this about helping the colored poor rather than buying their pacifism. She really thinks raising the minimum wage would close the wealth gap. She really deludes herself that BLM and Antifa would then go home happy.

This makes poor Krystal the Flak-Catcher Tom Wolfe famously wrote about. Here’s who laughs at the Latte Left.

These are no civil-rights Negroes wearing gray suits three sizes too big— —no more interminable Urban League banquets in hotel ballrooms where they try to alternate the blacks and whites around the tables as if they were stringing Arapaho beads— —these are real men!

And this is what awaits a dead and dying society. They watch. They wait. They take the Danegeld from Lefty. They’ll send The Right Reverend in his Jeebus-Man Chimp Suit as a “civilized” Bag Man. You give him the suitcase full of cash and never have to meet anyone from New Jack City. Run the scam correctly, and Whitey will think Reverend Chimp-Suit just sweats too much because they all do.

Meanwhile, outside the suburbs and over by the decaying ruins of a dead, Amerikan city, the real knee-grow awaits. He loads his weapons and perhaps sharpens his canines with a nail file. Affirmative Action? Sheeeeeettt!! The evil spectre of Nino Brown waits downtown. And that suitcase full of White Boy Dollar Bills had better show up. “Money talks. Bull-sh!t runs the marathon. Seeya, but I wouldn’t want to beya!”

And that’s why Krystal Ball is still terminally stupid. The Red Pill Therapy needs to go further. There is nothing the Krystal Ball Class could ever do to really care. The races in a democracy are perpetually at war. Do the demotism shuffle just right, and war will still be fought only on Electile Dysfunction Day. But, at best this only puts off a vast and apocryphal reckoning. As Malcolm X famously put it:

“President Kennedy never foresaw that the chickens would come home to roost so soon,” the Muslim leader said in 1963. “Being an old farm boy myself, chickens coming home to roost never did make me sad; they always made me glad.”

President Kennedy was The Krystal Ball Suburban Lefty of his era. He was the ultimate architype, who lived The Liberal Amerikan Dream. This was Camelot, until he met Mordred. Krystal Ball is tremendously misguided about Mordred.

Mordred, you see, is not an Alt-Right Bastard. Lee Harvey Oswald was a stock Communist villain from a Mickey Spillane pulp. The people who resent Precious Krystal and her affirmative action bon-bons are not carving 1488 tattoos into their biceps with a hobbyist’s soldering iron. The people who hate Krystal with the thermonuclear fire of a blazing evil sun are the ones who know good and well that Latte Leftists such as her collect them and trade them with their friends.

Affirmative Action is a miserable failure. It is a miserable failure for the same reason Rudyard Kipling famously criticized Ethelred for paying the Danegeld. Neither program will ever get rid of The Dane. And as Krystal Bell awakens from her pampered, ideological sleepwalk, what awaits her reminds me of a famous, canonical quote from Hillaire Belloc.