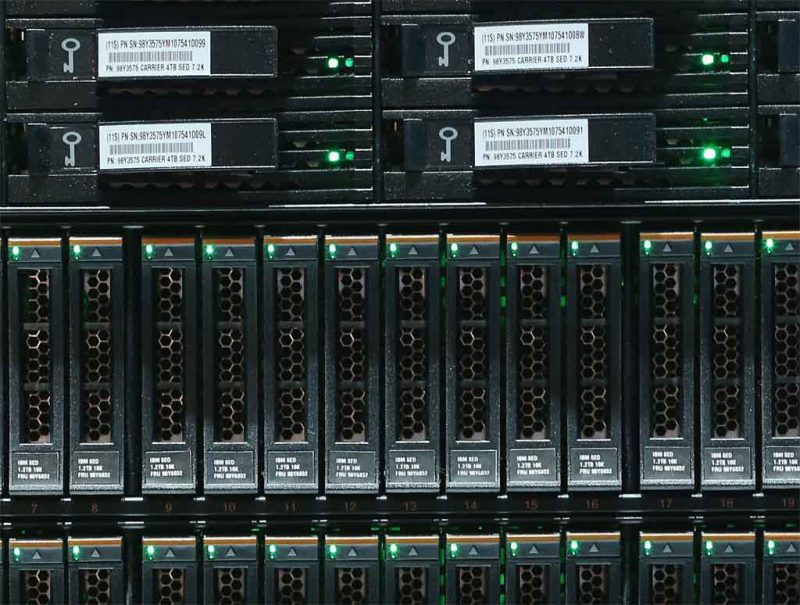 As predicted, America has chosen diversity as the hill on which it plans to die. Despite historical knowledge which tells us that multi-ethnic societies become divided against themselves, America decided that it was exceptional, meaning that the rules did not apply to it. As a result, it has now turned itself into a full totalitarian regime in order to enforce “anti-racism.”

This neo-Communist regime uses a different method than most totalitarians, since it is enforced purely by mob rule instead of government action alone. When one of the mob signals that something is unacceptable, the rest rush in to destroy whoever is responsible, made fanatical by their desire to insist that somehow this system is working.

In fact, as has been written here before, this system is dying because it causes its best people to drop out and not reproduce because life in this society, especially as a “success,” is miserable. We work long hours on unimportant public relations exercises, commute to avoid rotten inner cities, and live in a maze of laws that hamper us at every turn.

In turn, this creates a society which is reality-averse. We are fleeing from accurate assessments of reality constantly because those assessments reveal the problems that our society exists to ignore, namely that it is coming apart at the seams like ancient Rome and that people are miserable here.

Diversity may turn out to have simply been a great distraction in the end. Instead of worrying about how much we are failing, we can worry about whether or not the poor third world people are doing well. It is the moral equivalent of having a pet instead of children, which is something many of our people are doing anyway.

We have reached a point where diversity rules us so thoroughly that criticism of diversity has become the ultimate taboo. Anyone who does so has his life destroyed. This gives society ultimate power over the individual, while telling them that they are “free,” and ensures that we never deviate from our path toward diversity until we suicide.

Whether you are pro-diversity or anti-diversity — when making a policy choice, you are either a “yes” or a “no” vote with no middle ground — you can see how dangerous this situation has become. We have made one policy choice the center of our agenda and yet effectively banned any criticism of it. That is a path toward sleepwalking into oblivion, not success.

Even more, we can see the wolves gathering out there. Our pollution from the last two centuries has caught up with us, our economies and technology seemed to have reached their limits, and the new world that equality has made is breaking out in conflict all over. We are not succeeding; we are drowning.

All of this serves as backdrop to one more step in the process of decline: the internet — just like that — has died. When the public internet first became available in 1987, it promised us worldwide communication, and that we could share information with others without the limits of physical media. It also promised to be a library of information made available at the touch of a key.

Our technology mirrors our behavior, however, and since we are self-censoring we have eliminated the prospect of the internet. You can no longer say anything on the internet, and the library of information out there is censored as well by vast commercial interests who are driven by the needs of mob rule to have easy answers and ready censorship.

The removal of Gab.ai from the internet, first by its hosting provider and next by its registrar, just finalizes the death of the original idea of America and of the internet. We wanted to be able to have open discussion and access to all information; we got, at the end, something like a state-controlled television channel.

Gab was removed in the wake of the Tree of Life shooting in which another suicidal white nationalist committed murder of minorities at a religious institution. Like Dylan Roof, he meant well but fought the wrong enemy.

The enemy is within. It has always been us, in that we chose some stupid but addictive ideas like individualism and equality, and then applied them, turning our society into a tool for enforcing them. This brought us mob rule and now ushers us into the dumpster of failed empires as we reverse all of our founding intentions and become yet another totalitarian state.

Gab staff posted a message about these events:

Gab.com is under attack. We have been systematically no-platformed by App Stores, multiple hosting providers, and several payment processors. We have been smeared by the mainstream media for defending free expression and individual liberty for all people and for working with law enforcement to ensure that justice is served for the horrible atrocity committed in Pittsburgh. Gab will continue to fight for the fundamental human right to speak freely.

This was later replaced by the following:

Gab has spent the past 48 hours proudly working with the DOJ and FBI to bring justice to an alleged terrorist. Because of the data we provided, they now have plenty of evidence for their case. In the midst of this Gab has been no-platformed by essential internet infrastructure providers at every level. We are the most censored, smeared, and no-platformed startup in history, which means we are a threat to the media and to the Silicon Valley Oligarchy.

You have all just made Gab a nationally recognized brand as the home of free speech online at a time when Silicon Valley is stifling political speech they disagree with to interfere in a US election.

The internet is not reality. TV is not reality. 80% of normal everyday people agree with Gab and support free expression and liberty. The online outrage mob and mainstream media spin machine are the minority opinion. People are waking up, so please keep pointing the finger at a social network instead of pointing the finger at the alleged shooter who holds sole responsibility for his actions.

You can’t stop an idea.

This tells us all we need to know: Gab was a free speech site, so people could say anything, but since some of them said things which go against our social narrative and point out that diversity is failing just like our empire, the site had to be banned. The pretext of “encouraging violence” was used, which makes no sense because any speech which is against anything could be construed as encouraging violence to enforce that policy change.

As is the norm, excuses are made and justifications are given, but no one is really convinced regarding the witch hunt against Gab:

The move comes as other companies including PayPal, Medium, Stripe, and Joyent blocked Gab over the weekend. It had emerged that Robert Bowers, who allegedly shot and killed eleven people at a Pittsburgh synagogue on Saturday, had a history of posting anti-Semitic messages on Gab.

GoDaddy confirmed its decision in a statement to The Verge.

“We have informed Gab.com that they have 24 hours to move the domain to another provider, as they have violated our terms of service. In response to complaints received over the weekend, GoDaddy investigated and discovered numerous instances of content on the site that both promotes and encourages violence against people.”

…Meanwhile, major companies like Apple, Google, and Microsoft have taken various steps to remove Gab from their platforms.

This means that the internet has died. No one will invest time in creating content that can be removed because someone complains, and since large monopolists like Google and Facebook enforce political correctness on their platforms, we effectively have fully controlled speech, or as it is known in other lands, propaganda.

Yes, you will still be able to post inoffensive stuff or political propaganda that favors the neo-Communist regime. This offers nothing however and is already causing an exodus of the intelligent, thoughtful, and interesting from the internet. We have made the internet into the exact opposite of what it has promised.

This shows us how America has died as well. The old WASP America believed in open discussion and if you got offended, you licked your wounds and dealt with it. The new multi-ethnic and multi-cultural America, especially its lower-order whites, cannot handle that level of maturity and reacts with panic to controversy.

In addition, other races are more likely to support anti-speech laws: 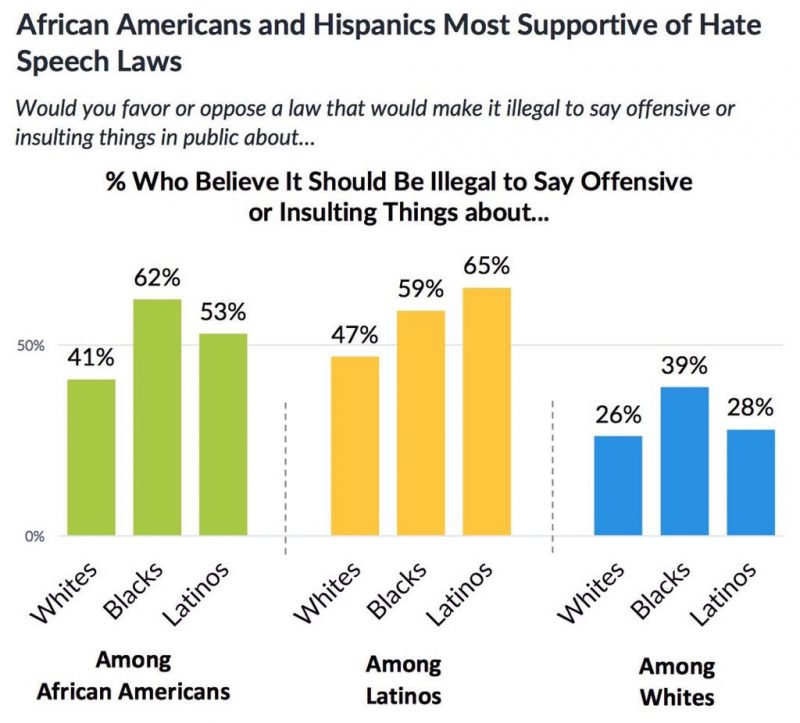 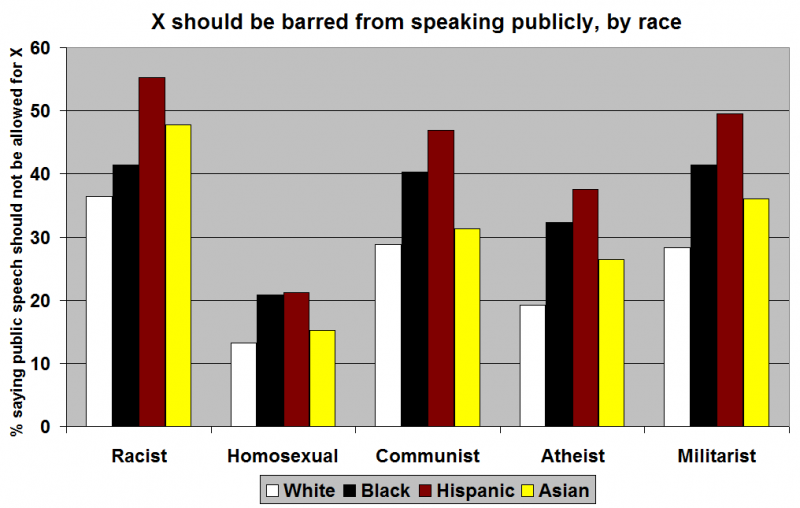 If you want to know why the Left loves diversity, it is because it creates a compliant population which will offset the former white majority, who believed in old fashioned things like free speech, freedom of association, discussion, and logic. With the third world herd, you get a mob which can be bought with government benefits.

Just as the internet was a Wild West that once welcomed controversy, America once believed in figuring out what was actually real before acting on it. New America, like the lesser nations from which many of its citizens come, has become the exact opposite of what it once was: a moribund regime enforcing ideological compliance so that no one notices that the end is near.