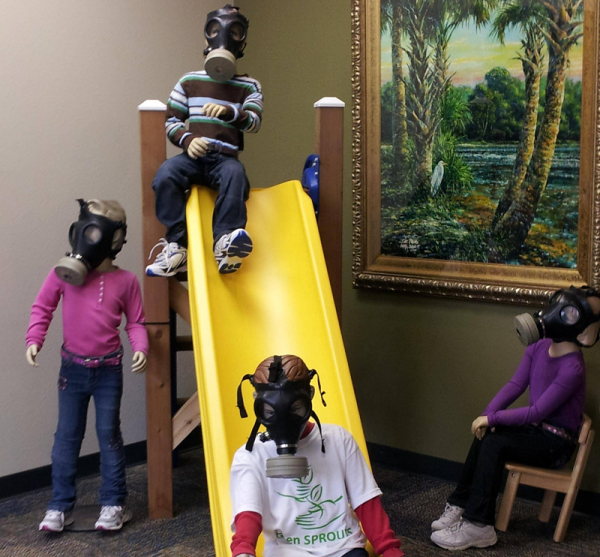 Of all that I have read or written on the decline of the West, very little examines a basic topic that might be the ultimate elephant in the room: the decline in sanity.

We have passed so far beyond the point of “common sense” and normalcy that insanity is seen as the norm to the degree that anyone calling for actual sanity is widely viewed as themselves insane.

It’s worth having a momentary chuckle about, before you look around worried that you let the mask slip and might be recognized as a realist among sheep.

The situation resembles the inverse of those “they walk among us” shows about aliens who disguise themselves as people and manipulate us. In this case, we — the few normal remnant — walk among them, and they control almost everything. Invasion of the Body Snatchers and They Live closely portrayed this idea, but even those missed the basic problem of modern democracy: the majority are the abnormal normal and the few who are actually sane are a persecuted minority.

Part of this insanity comes from the series of wars that brought us liberalism in the West. The American Civil War, the Napoleonic Wars, the World Wars and the war against Communism. We have grown up under the searchlights and to the beat of the drum and now, it is the only metaphor we understand. The War on Poverty. The War on Drugs. The War On Inequality. They come from the same source, which is our need to ideologically polarize people who have basically nothing in common.

Much of the insanity is inherent to social reality itself. We replaced natural order with social order. This was the triumph of The EnlightenmentTM: people no longer had to pay attention to reality, because they were now equal, and equal means that insanity is on par with sanity. You cannot tell people that they are equal and their ideas are all valid (an equal baseline, in other words) and then start imposing social constructs like sanity, gender, race, intelligence and reality upon them. Not that. You must accept them as they are. The first place to explore this was California, which quickly became a “get freaky with your bad self” welfare state. But all the world is now California, making each individual entitled to participate in every aspect of social life no matter how insane that person is. Until they start shooting, they are presumed to be sane, unless they’re right-wingers. Then it is off to a military hospital for re-education, or at least, soon will be.

Some of the basic craziness of the modern West comes from our need to deny certain things. Like… the downfall of our civilization. Or that most people are totally frickin’ nuts and it is socially taboo to notice that fact, so we all just hum and pretend to not care while secretly withdrawing all of our opinions, ideas and personalities from public. The atmosphere in the modern West is downright Soviet in that, since any random statement may trigger the wrath of the lynch mob, the only safe statements are those which affirm that narrative in the big liberal papers, The New York Times and The Washington Post. Repeat what you read there and you are probably OK. Anything else? You might get drummed out of your job, have your rent or house note called in, be ostracized by friends and shopkeepers alike, and watch your spouse leave because he or she also fears ostracism. Those who deny denial are political enemies of the state, and thus of the two big liberal papers, and thus are the only acceptable targets of hatred in polite conversation.

It is viewed as a personal failing to notice denial. If you observe that our society is falling apart, people smugly tell you, “Well, sorry to hear it isn’t working out for you… It’s working just fine for me.” Coincidentally, they get promoted and find themselves well-off because they have the right opinions and the smarter they are, the more valuable it is that they publicly refuse to notice the denial. This increases insanity by making it impossible to speak commonsense observations in public, making each person who notices such things feel as if they personally are the problem. When we deny truth, only untruth remains, and those who are inclined to truth get treated like mental patients even though the actual mental patients are those getting rewarded by the system.

Our society represents not just inverted natural selection, but natural selection based on the wishful thinking of the average person who, upon being told he was “equal,” pushed that conclusion to its extreme — as was forseeable — and equated insanity to sanity. Sanity is the new taboo; insanity is the new normal. A small remnant of people who remember nature, order, logical thinking and other forms of now-taboo “noticing” or “denial of denial” huddle in their basements, only recording these thoughts where they will not be observed in any significant form and definitely not tied to their own names. If they are discovered, a van full of mental patients wearing lab coats will show up and carry the sane away, lock them in an asylum and forget about them, sacrifices to the altar of our necessary denial.

Kant’s categorical imperative, Biblical law and the popular notion of the “golden rule” | Chasing our tails