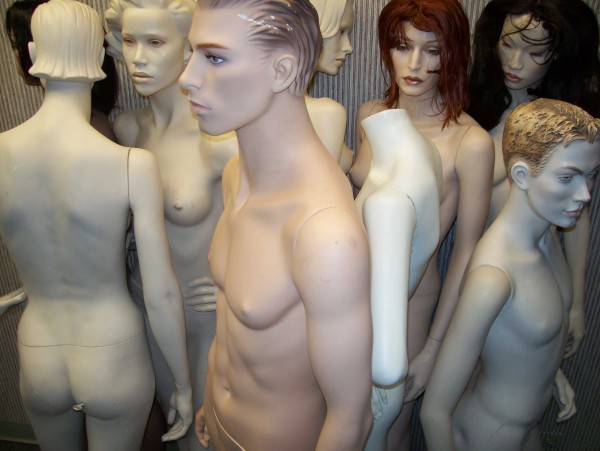 Dogs, despite being nature’s kindest and most enthusiastic animals, have the baffling habit of chasing their tails. They notice the attraction and lunge for it, as if this discovery of themselves could give their lives meaning.

Reputedly, humans are more intelligent and not prone to such behaviors. After some years of experience in the world, I can no longer agree. We are the ultimate tail-chasers but, being social animals, we’ve found a way to pretend that we are not chasing our own tails if we project the image of a tail onto others.

After a few weeks in the wild one may return to society and notice as if for the first time how it is literally covered in advertising. Not just the wheat-paste posters, the giant billboards lining the roads, the advertisements on TV and radio blaring from all angles, but even the little stuff.

People repeat what they’ve seen or heard. Movies and music even feature product placement. When they’re not doing that, people advertise themselves. They brag about their kids, pitch you a business plan, or as happens every day describe for you their method of doing something-or-other and expect you to validate it with approval.

The point is that we are chasing our own tail. Merchandisers try to find out what “the people” want and advertise it to them, hoping “the people” will buy it. As a result, there’s no leader. The people are in theory the deciders, but they are also shaped by those who want to benefit from their decisions. And so like a dog chasing its tail, business pursues consumers who pursue business.

It’s not any different in the world of politics. The candidates try to figure out what the voters want so they can offer it to them. The voters are in turn shaped by what the candidates are offering. The entire political process chases its own tail because no one is in control, only two groups attempting to placate one another.

At a social level the same thing is happening. To be popular, you need to be where it’s at. That means wherever what is trendy and viral right now is occurring. This gives us a whole crowd of people chasing its tail, waiting for someone to do something trendy so they can all chase the trend and thus earn the esteem of the crowd itself.

With this kind of circular logic going on, it’s no wonder our society can barely make simple decisions and has fallen behind under a giant pile of unresolved details. We are not making decisions, but waiting for others to validate us, and they’re waiting for the same from us, which creates a sort of pre-emptive negotiation based on our mutual weaknesses.

Advertising is pitched to fears. Do you have bad breath? Don’t know what to cook for the kids so the neighbors think you’re a good mom? Afraid you don’t look sharp enough for that promotion? We have solutions for your fears, except because they don’t address the underlying problems (bad hygiene, neurotic distraction, low job performance) you’ll always come back for more. We won’t mention your weakness if you don’t mention we’re a scam.

Politics cannot focus on what we agree on because there’s almost nothing we can agree on. When you need to unite a group of people, and they’re each pulling in an individualistic direction, all they can agree on is avoiding big and obvious problems. Otherwise, they return to inertia. Our agreement is based on fear, specifically the fear that threatens our ability to be oblivious to anything but fear. Politicians agree not to mention the callowness of voters, if voters don’t mention that politics is manipulative by its essential nature.

Our broken social scene reveals the real culprit. If you can envision a group of monkeys sitting around at a clearing in the African jungle, you can see our glorious simian roots. Each monkey watches the others. When another monkey acts, whether to pick up a stick or pick a fruit, the other monkeys assess the likelihood of his success. If he succeeds, how can I get ahead off of what this guy is doing? I can imitate him and start a trend, and thus become “important.” Or, I can fling dung at him and shriek, making myself seem like a protector of the tribe.

The problem with this type of thinking is also what explains why the monkeys stayed in the jungle while humanity moved on. When you chase your own tail, you never pick up a direction other than thinking of the tribe. Your world becomes the tribe, and you become blind to physical reality outside of what others think. You also limit your thoughts to variations on what has already been thought.

Humanity broke free, for a while. We rewarded the independent thinkers and as a result, we created a growing edge within our population. Our leaders made good choices and invented realistic responses, and so we thrived. But then the other monkeys sitting around the clearing saw this and wanted their share of the action.

Because being clever is easier than thinking, they started with cleverness. First they equated leadership thinking with “new ideas” instead of “realistic ideas.” Then they started inventing new ideas. Of course, like modern art, these ideas had nothing to do with reality and weren’t even new. They were new-looking variations of the same old stuff, because that’s what succeeds, in a social sense.

Success in a social sense however determined who succeeded, for a time.

Most of the monkeys can’t tell the difference between a “new idea” and a good idea, so when they saw that trend of newness forming, they got behind it. When others objected, the new monkeys flung dung and called those other monkeys reactionaries. What mattered was what was new, exciting and made all the other monkeys excited. The chattering reached a fever pitch, the Bastille was overthrown, and from henceforth the new monkeys ruled.

But as it says above, “for a time.” The new ideas did not work so well, but monkey society was resting on such a huge momentum of the past, both in terms of wealth and technology, that all it had to do was keep encouraging the same stuff to happen time and again. Keep throwing money at technology, advertising to the consumers, lying to the voters, and hoping it will all work out.

For over two centuries it seemed to, if you could ignore the fratricidal wars and gnawing sense of inner emptiness and purposeless existence. That doesn’t bother everyone. The people who could be extras in Idiocracy tend to find an empty existence pleasant because that way nothing impedes their pursuit of entertainment, donuts and sex. The screeching and flinging of dung reaches a fever pitch.

Now, the monkeytime has come to an end. The problems that we blew off because they were long-term, and thus not popular, have begun to manifest themselves. They aren’t apocalyptic, but worse, they’re never going away. They will slowly grind us down until we are a nub. We have created a tunnel vision of our own prospects.

It’s funny because that’s what those reactionary monkeys warned us about. Our new ideas were just chasing our own tail. And like all circular motions, eventually they wind down and we lose inertia, and then sit becalmed while decay absorbs us.