In the Shadow of the Big Red Button 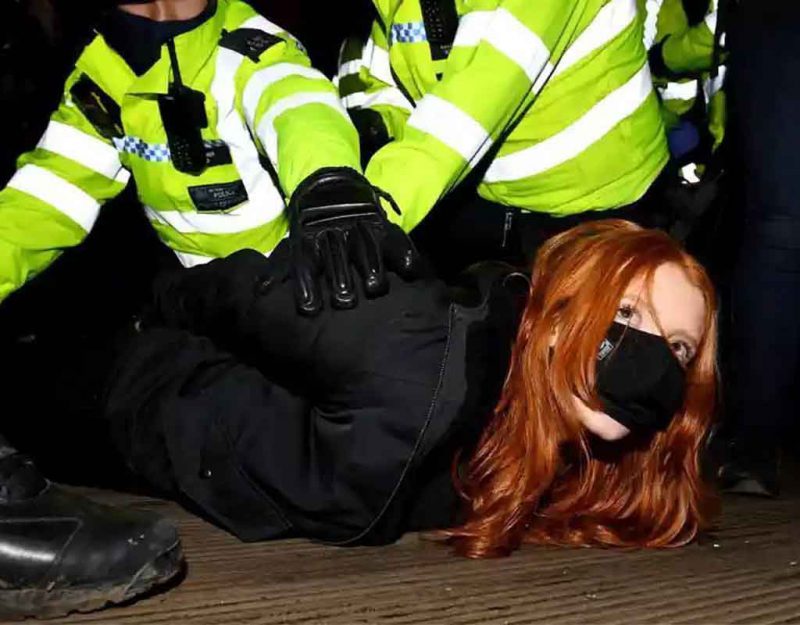 The room had been stripped of all sentiment. The bare walls were painted a dull grey and the plain metal door swung shut of its own accord. A single steel table separated the official from the civilian. The man who sat behind the desk lifted the voluminous tome.

He began to read. Each person exiting the lobotomy camps they advertised as education centres had to sit and listen to the law, a collection of rules that kept their civilization functional. Herman watched for the first faint bit of boredom creeping into the civilian’s eyes.

At that instant, the automated attention corrector would administer a quick jolt of electricity which made the citizens jump and sit upright, ever-attentive again.

It was at this point that Herman liked to have his fun. “Am I boring you Miss…” — he trailed off, looking down at one of the many documents that the civilian had to fill out — “…Carson is it?”

Herman smiled as a bead of sweat formed on her forehead. “What law have I just read you?”

She was getting very nervous now but she managed to squeak the correct answer, “Adoption law.”

“Good.” However, Herman was a bit annoyed, since he relished the days when these shocks were not automated and he would be able to shock at will whenever someone yawned or their eyes drooped. He eyed the big red button sitting beneath a glass container on his desk. He longed to slam it; it had been too long since he had. Unfortunately Miss Carson did not give him sufficient reason, and so he had no choice but to conclude his duties and then take his lunch. The other officials met him in the lunch room.

“Anyone interesting come in today, Herman?” his co-worker Rudy asked.

“Nah, just the plain old dull ones. Planted a subliminal for her to adopt a kid. It’s not fun toying with them anymore, and it’s grown quite boring in fact.”

“Don’t let management hear that,” Rudy joked, “or else they might strap you in and give you a shock.”

“I passed my entrance exam without any shocks,” Herman said. He continued: “When was the last time you pushed the big red button eh? I wish this afternoon I could meet a true rebel. Oh how I long to push the big red button, Rudy.”

“Trigger finger itching is it?” Rudy said. “Let me see if I can’t pull some strings get someone in here who survived the lobotomy camp.”

Herman’s eyes lit up at the thought and he returned to his work happily. Rudy did not disappoint. Later that afternoon in came a young man not wearing the brand name clothing that is recommended for people going into the working class, seemingly regarding the room with distaste, his hands in his pockets, hair untidy, and his face already wearing a cast of abject boredom.

The assistant came to strap the young man in when he pulled away.

“Strapping you down for the reading,” Herman told him. “It’s quite standard, I assure you.”

“Why do I need to be strapped down?” the man asked, at which the woman gasped.

“It is illegal to question The Authority,” she said robotically. “Herman, should I call in a chairman?”

“No, that’s quite alright Dolores. Have you synced him with the board?”

“Of course, but he hasn’t filled out his paperwork properly.”

“There’s like fifteen forms there,” protested the civilian. “I don’t see why you need so much bloody information anyway.”

Dolores gasped again but Herman raised a hand. “It’s fine, I’ll handle him. You can wait outside.”

She left obediently and the young man folded his arms. “So what does this entail exactly?” he asked, lifting a single eyebrow.

“I read you the law, any piece of law that I see fit. If you can sit through it obediently without questioning anything then you pass. But as you already know, it is highly irregular for you to come in asking questions right away.”

“And I don’t understand why I shouldn’t. My parents have raised me right. I know not to accept anything blindly,” the young man said.

Herman laughed at that. Perhaps that was so, but his fate was orchestrated from birth, when he was implanted with the simple chip that allowed Herman full control of this young man. Herman felt himself sweating and giddy with the prospect of the zapping pain it was about to deliver to this young rebel.

“So are you saying that you won’t sit and listen to the reading?” he asked in his quietest Good Cop voice.

“I get to push that,” Herman said, gesturing toward The Button. Really, he should have called in a chairman to remove this boy from here, but the temptation got the better of him. Saliva gathered in the corners of his mouth.

“And what does that do?”

“We could find out. All you have to do is say very clearly that you reject the reading of the law.” Herman said. “Or else sit and listen to me read it.”

“Are the laws just as ridiculous as ‘don’t question the Authority’?” The young man said. “A free thought is a bad thought? If the government doesn’t endorse it, then it is false information? It’s bad enough that I was born into the system, but now I’m trapped in it,” he continued.

“These messages are for the public good, child, don’t you see? Given the chance to think for themselves half of them would end up insane, and we’d have a society filled with people bickering about this or that, complaining about this or that; this way, everyone does what they are supposed to and everyone contributes. Doesn’t that sound like a good thing to you?”

The young man sighed. “You’ve just described a machine to me, each piece is bound to its place, a motor can only ever be a motor and nothing more; humans are much more flexible than that. They have potential, potential for bad things, surely, potential for stupid things, absolutely, but also potential for good things, and even rarer than that, the potential for great things. In school nowadays, or at least what passes for it, you’ve stopped teaching Shakespeare, Ernest Hemingway, Jane Austen, and Aldous Huxley. Where are the great works of Bach, Beethoven, Vivaldi, Schubert. Where has all the art and soul gone? Into the machine,” he answered himself, and then said clearly, “I reject the reading of the law.”

Herman was delighted to hear that at least and he flipped open the glass case on his desk. He flexed his fingers and balled his hand up into a fist, which shook slightly with anticipation. This was too good to be true! He looked at the poor stupid lad before him. “Are you sure?”

To his delight the boy nodded. Herman brought his hand smashing down, depressing the big red button with a satisfying click. Then he turned and watched the boy avidly.

But his smile disappeared quickly. Instead, the young man was smiling. Then Herman he heard the whirring, the vibrations rattling in his own skull. “What have you done?” Herman asked.

“Oh, was that supposed to do something with the chips babies get implanted at birth? Cause I’ve had mine removed. It’s a very nifty gadget though, so I kept it, tinkered with it, figured out how it worked and found a backdoor into it, into all of them. You know they’re all linked right? It’s easy to pinpoint one person’s or another, and so instead of syncing my own chip to the board, I synced yours instead.”

“No!” Herman said trying to think of a way out, but there was nothing in his mind.

The whirring grew and grew. It grew in the minds of the others as well, those mindless drones that this system had created. All were hearing the high-pitched whine. And then quite suddenly there was a miniature explosion on the inside of Herman’s head. The effect was immediate; he fell over his chair and onto the ground. Blood pooled near his open mouth.

The young man pulled an old two way radio, “Hey dad, it’s done. Looks like I fought the law and I won.”