American citizenship used to mean something. We live under a federal government that was designed in a very interesting and distinct way: certain functions were centralized, but many were given to the responsibility of the individual states. The way this country was colonized and eventually taken over, and due to its sheer size, each state had its own mini-culture associated with it. Thus, each state had its own unique problems and own unique solutions, its own unique resources, etc. The country was really designed for, ultimately, fifty smaller communities to live the way they saw fit, while obeying a set of basic federal laws and only promising to not violate those laws. 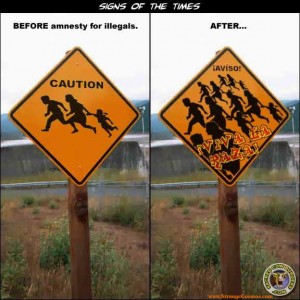 Now, we’ve swung in a different direction. The more the executive branch of our government centralizes power (we can go all the way back to FDR’s New Deal programs if you like), the less distinct our fifty different cultures become. Heavy federal regulation has led to an expectation that each state will not live by its own values anymore, but roll up their portion of the federal tax pie to the IRS and wait patiently for handouts (read: distribution of funds). This is backward because it requires all states to obey certain rules in order to obtain funding for many state government functions. The federal government initially collected no income tax; it would tax certain items and otherwise borrow from the states for military purposes and a few other basic functions. In this, we can see that power centralization force-fits all of us into a lowest common denominator (LCD) – and that standard is usually set by loonies out in California.

We are currently seeing a direct example of the disconnect between state and federal government in Arizona:

The law, the nation’s toughest, seeks to identify, prosecute and deport illegal immigrants
and gives police broad powers to stop people on suspicion of being in the United States illegally.

Seventy-one percent of poll respondents said they’d support requiring their own police to determine people’s U.S. status if there was “reasonable suspicion” the people were illegal immigrants, the poll found.

An equal percentage supported arresting those people if they couldn’t prove they were legally in the United States.

Despite the fact that most hard working, tax paying Americans want their government to do more to curb illegal immigration, we’re being blasted in the media with stories about how we can’t – that’s racial profiling; these people are just undocumented workers; “why you gotta be so mean to people who just want an opportunity?”

Never mind the fact that the logic of amnesty from these same people makes no sense. If 47% of people don’t pay federal taxes and you grant illegal immigrants amnesty, many of whom would fall into that bracket, all you’re doing is allowing them to demand higher, minimum wages and not pay any taxes anyway. That gives us more mouths to feed instead of a broader tax base, and does take minimum wage jobs from Americans who would clearly work at that rate.

When we start worrying about the problems of everyone else rather than the problems of our community and upholding our closely held set of values, simple rights outlined in our own founding documents – think gun ownership – seem draconian and old fashioned. Suddenly, rather than the federal government answering to its taxpayers, the taxpayers are answering to the government. When fifty distinct, smaller governments all try to force-fit the rules of one, centralized government into its culture, culture is eventually sacrificed, and with it standards and values rooted in tradition and history of that specific area.

Another argument we hear about from the LCD crowd is that we are “a nation of immigrants”. We’re actually a nation of European immigrants, and after the colonists revolted and created a sovereign nation, all of those immigrants were documented. The Irish left in droves due to famine and were simply documented upon arrival. The Italians had pretty much the same deal. But being documented, and having the threat of deportation looming if arrested, both groups of European immigrants assimilated – even through hardships [1,2] – and were still very proud to call this country their own. The Italians built a good swath of New York City; the Irish rose to political prominence in Boston and other cities.

I’ve had this argument with others, who feel that we can do better than how Italians and Irish were treated upon arrival. I tend to think of things the other way: I don’t think they would have been so quick to assimilate, adopt the English language or American values had they not gone through that hardship. As a result, I’m okay with the history – they weren’t in their homeland, and they didn’t expect people to hand them jobs and benefits. In fact, accepting that was considered shameful, and it’s another reason we see immigrants from Asia rising to prominence as well. They’d rather tough it out and assimilate than come here and expect a monthly check simply for being present. 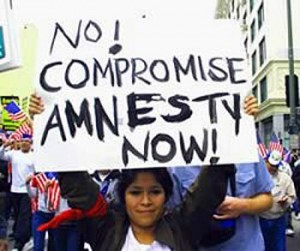 One problem with illegal immigration and amnesty is that you don’t have to work for citizenship that way, and those old, draconian founding documents require our federal government to protect our borders (read: sovereignty) as well as the idea of American citizenship. If you don’t have to work for it, why respect it? That’s probably part of the reason we see people sneak in and then demand amnesty rather than asking nicely if they can get in line with others who wait years for the same privilege.

But the main problem Americans have with illegal immigration and what we don’t see from illegal immigrants from south of the border is the same pride other immigrant classes have shown upon arrival. We don’t see them rise up and create businesses, or become political activists for something other than Aztlan movements or handouts. We don’t see them act against gang violence and the drug trade that they bring with them into this country. And we certainly don’t see them going through much in the way of hardship, other than taking illegal jobs that pay cash under the table to work at a construction site or for a landscaper.

That lack of pride translates to a lack of culture. If you leave your culture at home and move to a new place with no clear cultural identity – at least, not one you care to assimilate – then there’s a disconnect between the wants of the illegal immigrant and the idea of citizenship. Rather than take the hard line and insist these people assimilate as other immigrant classes have done, we feel it’s far less burdensome to just allow them into our culture. Since we don’t have a real culture anymore, it seems we’ll take anyone with a warm body and hands that can work just hard enough to shuffle paper – or chop onions.

Interview with Vijay Prozak | On interface layers and our perfect inequality