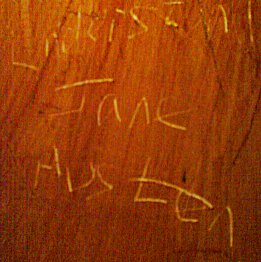 On a recent trip to some decaying, faceless city or other I spotted the following inscription crudely scratched into the wood of a toilet cubicle door:

It was a very curious thing to write on a toilet door and intrigued, I decided to capture it photographically for further analysis before heading back to the bar.

At first glance it seemed to be merely a bizarre and random piece of pretentious vandalism, perhaps the inebriated and spastic outpourings of some cider sodden student or drug addled hipster.

However it then struck me as being similar to, though less violently vehement than, the â€œyuppie scum must dieâ€ graffiti which Patrick Bateman espies (or himself writes) in Brett Easton-Ellisâ€™ American Psycho – a reflexive and unconscious discharge in sudden horror at the realisation of the hideousness of his surroundings.

It seems to me the author of this particular message was making a desperate and confused appeal to his fellow city dwellers, despairing of the stygian depths in which he believes himself helplessly stranded and powerless against, a rusty cog in the grinding merciless hell of the 21st century world.

Like a delicate flower absurdly sprouting up through miles of festering faeces and commercial plastered concrete, it states with quiet defiance how even in the midst of the baseness and ceaseless mechanised â€œadvancementâ€ of modern life, the author of this graffiti had still managed to cling onto some degree of higher thought.

Why Jane Austen though, I wonder. He could have plumped for Mary Shelley at the very least. Unless â€œI understand Jane Austenâ€ is some kind of homosexual palare, in which case I may be about to receive some very unusual emails…

Why conservatives are doomed | The revolution never dies