Why conservatives are doomed

American conservative thinking has overwhelmed most of the world’s conservative parties. Their idea is to base intense patriotism on the idea that we’re “free,” and can do whatever we want as individuals, and use that to justify caring about social order. 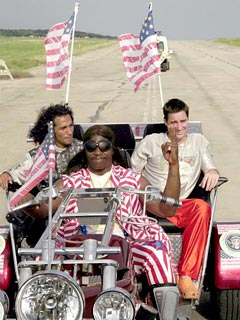 Ultimately what conservatives are trying to argue toward is that the society as a whole is more important than the individual, and that the individual must adapt to common sense about how reality works. They think “freedom” is a vector to that because it sounds good.

As a result, they’ve invented this mythos that Big State government — think Hitler, Stalin and Democrats — wants to take away your ability to do whatever you can afford to do. After all, those who are born smarter and work diligently tend to have some cash ready to use.

In this view, you can buy that big SUV because global warming is an illusion, and no one should be able to tell you what to do so you can be a rugged individualist. This thinking is doomed for the following reasons:

It’s that latter one — limited resources versus unlimited needs and desires — that we’re going to face. For a minute, assume that global warming is simply a power grab by third world countries who want the first world to turn off its industry so they can get ahead. Fine — but what about pollution, species depletion, limited farmland, low water supplies, and violent cities?

The libertarians and Republicans this week set up a great wail about a new face in Washington who they associate with Big State decisions. They will claim he is against their Holy Book, their values as individualists, and the sanctity of life.

And thanks to resourceful bloggers, you can read excerpts from a hard-to-find book co-authored by Holdren in the late 1970s, called Ecoscience: Population, Resources, Environment, online.

In it, you will find the czar wading into some unpleasant talk about mass sterilizations and abortions.

Oh no! Abortions and mass sterilizations — those might not be fair to the rugged individualist. But they also might be required by the demands of our situation here on earth.

After all, the world isn’t just humans — it’s an environment, too, and scarcity of resources including space which will regulate humanity. We can make decisions within the anthrosphere, but since we’re one part of a big world, we may not have the ability to make those decisions the way we want to. Sometimes, we must simply adapt.

It is now hard to think of a single major problem we face, here in Britain or elsewhere, which would not be solved, or at least ameliorated, by having fewer people.

Everything from hospital waiting lists, crowded trains, the looming energy crisis, water and sewer systems unable to cope, unaffordable housing and unavailable dentistry have, at their core, Britain’s burgeoning population.

Our roads will become even more congested, our trains more crowded and even slower, the waits for service longer and delays ever more a part of life.

Housing will become ever more unaffordable, we will have to spend billions on new schools and hospitals to cater for the equivalent of two new Londons – two vast metropolises somehow to be shoehorned into what is already a desperately crowded land.

We will, inevitably, lose great swathes of our countryside. The green belts will have to disappear. Ghastly and ill-conceived ‘new towns’ will spring up all over the South East and Midlands, the areas where new people want to live. London and its environs are already, effectively, full; but that will not stop them getting fuller still.

His point is refreshingly clear: even if we just look at numbers of people, what happens when we get more? We all live in cities, and the cities expand. The countryside is consumed. Whatever environmental problems exist get worse.

How do we reconcile the individual’s unlimited wants and desires with a finite amount of space before we wreck things we need or should keep sacred, like a healthy environment and unpolluted air and water, or just enough space so that earth is not a giant sardine can?

Here’s a short list of data points about how we’re wrecking this planet with overpopulation:

You get the picture. Now on to the magic question: how is it that we have systematically failed to address these problems, and that they’re still elephants in the room today?

You’ll notice that a lot of our effort spent on this blog is devoted to smashing the idea of equality, or that each person has a “right” to do whatever they want. We also spent a lot of time pointing out that people have different abilities and hence values to a forward-moving civilization.

Our goal in this is to smash the sacred cow of the conservatives, which is individual autonomy as a promised right to all people. It is also a sacred taboo of the left through their dogma of “equality.”

Why would we do this? After all, we’ll be more popular if we promise you can buy that SUV, and that just buying green light bulbs will take care of the problem. The people who make those promises are far more popular than us.

However, dishonesty has a way of coming back to haunt people. When our writers go home at night, we have no guilt on our consciences because we did not lie — we faced the truth with a level gaze and if it didn’t blink first, we didn’t back down.

Our society is making people into small atoms that do not interact with others. People recede into themselves and do not face reality and mortality. They fear anything except what they intend to do, or in other words, their wants and desires.

Students are immature, they rely too heavily on Internet tools such as Wikipedia as research sources, they fail to learn independently and they expect success without putting in the effort, said respondents to the survey by the Ontario Confederation of University Faculty Associations.

“The McGuinty government is applauding itself for increased graduation rates from secondary school,” says the confederation’s report, which urges more funding for for classrooms.

“However, it appears that secondary students are not receiving the requisite skills that they need to be successful in university studies.”

Only 2.27 per cent thought students are better prepared.

Observers blame a number of factors, from inflated parental expectations to the self-esteem culture that leads young people to believe that failure is impossible and paying tuition means getting a good grade.

Look at what this article shows us: the end result of “freedom,” or agreeing to have no direction except personal directions, is that people recede into themselves and become less capable, and more solipsistic.

We’ve been so busy worrying about how to make everyone feel equal and wanted, we’ve forgotten about the world around us. Now as the free resources get tighter, we’re going to have to make hard decisions about the future.

Conservatives are making the biggest career screwup ever by not simply being honest. They could be like the government in the article above — promoting themselves for having made more people graduate, even if at a lower rate of quality, or in other words, hiding the truth behind one positive attribute of a bad situation — or they could be honest.

When you fail to tell the truth, you are de facto lying, because you are hiding things people need to act on behind a smokescreen of happy — like lying to them directly and telling them something or other is not a problem. Conservatives are attempting to embark on a big lie to try to beat the even bigger “freedom” dogma of the Democrats. It is not going to work.

If instead they got practical about facing this situation, starting with the hard parts we are afraid to face — that not everyone can fulfill all of their wants and desires, and that we’ll have to rank people by their usefulness — they will become known as honest people as the years go by. And people will thank them for that.