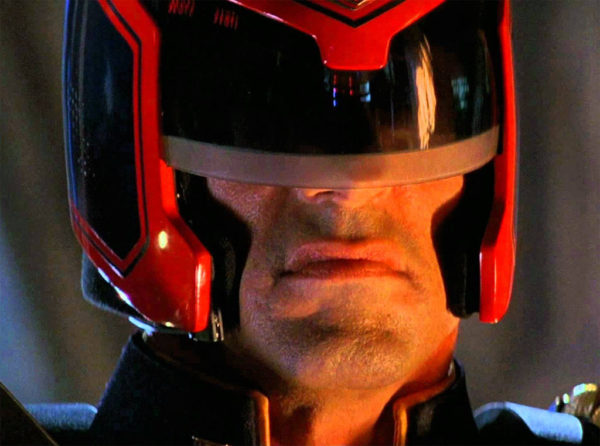 The problem for those of us trying to fix the West is that by making things better, we improve a collapsed civilization and by so doing, allow the collapse to continue.

Colin Liddell wrestles with this in a sapient analysis of the comic book character Judge Dredd, who both struggles against and enables a dying civilization:

Dredd, like any other superhero, seems to exist for no other reason than to prevent systems that would and perhaps should collapse, from collapsing.

Considering the two opposed notions of history â€“ the People as everything versus the Great Man as everything â€“ it can at least be said that, despite their contradictions, both views are at least dynamic, implying some development, some progress towards something. The tribes and classes struggle and create revolutions, kingdoms, and states, which also struggle, leading to empires, new technologies, and ideologies. Likewise, the Great Man. Mohammed, Columbus, or Napoleon, steps forward and new religions, continents, and political realities come into being.

Both views of history initiate stages of struggle that are essentially meritocratic and progressive. Dredd, however, is the antithesis of all this. He stops struggle because all struggles are de facto crimes, while his own power lacks any kind of vision. He is essentially a conservative on steroids acting as a dead weight on the society he polices.

In this, we find the crisis of the modern conservative: we know that our society is all wrong, that evil got the upper hand, and that everything needs to be re-done because the rot runs so deep that merely fixing it in one place allows it to thrive in another, nourished by the parts that we have fixed.

Taxes are a simple metaphor for this. If you are a good conservative — “work hard, be patriotic and go to church” — then all you manage to do is pay more taxes to the government that oppresses you. Law enforcement is another, in that if you bust all the bad guys and make society work again, then people go back to sleep and the evil carries on strengthened.

In this sense, Judge Dredd is not a hero, but a tragic hero, or one who struggles only to defeat himself. In the short term, he does a great thing because he makes Mega City survive; in the long term, he has ensured the ruin of all once the top-heavy metropolis reaches crash conditions and self-destructs.

When in an evil time, attempting to make things better is to empower that evil time. But what makes our time evil? The answer comes to us from the ancient path in which “evil” was understood to be life out of balance by being in denial of the obvious natural hierarchy of men and the behaviors required. Our ancestors went to war against hubris:

Achilles has a tragic flaw â€“ his hubris. It brings about the tragic sequence of events â€“ the death of Patroclus. This, in turn, causes the educative suffering that leads Achilles to change his character and values for the better. In a very deep sense, then, the suffering is worthwhile, since it is redeemed by the moral improvement it engenders.

This shows us the real battle that we fight: before we can be real heroes, we must win the battle within our souls so that we are not individualists, but instead show humility toward the order around us, and through that discover the reasons why things are as they are. Through that we can understand virtue, or striving for what is best in the context of this order, and work to achieve that instead of trying to “fight” problems and issues that are consequences of a society without virtue.

On Amerika, there is much talk of hubris, which manifests in the toxic brew of solipsism, individualism, narcissism, egalitarianism and mob rule that afflicts the modern time. We cannot beat this hubris until we defeat it in ourselves and stop fighting it directly, but instead strive for a virtuous civilization as a whole, so that we bypass the false direction toward which hubris leads us.

We all want to believe in a Judge Dredd style process. If only a million supercops descended on our society, beat down all the bad guys and threw out all the rotters, we could live in the status quo minus the bad. But life does not work that way. We cannot fix the broken, only create the beautiful and migrate to that, leaving the modern entirely behind.