How we emasculate ourselves

Growing up, my greatest frustration with this civilization was how impotent it was. If someone started doing something that was obviously insane or destructive, everyone backed off and made some pithy polite comment like “Oh well, it’s his prerogative.”

Here’s the flip side of that:

Our elites live in big cities and are far removed from the fields. Whether it’s Brown or Ehrlich or the head of the Sierra Club or the head of Greenpeace, they’ve never been hungry.

Although this statement is a logical fallacy, most people will accept it as a valid argument because it’s socially valid. It’s easy for you to say we should not overpopulate, because you have never been hungry. So don’t interrupt those who are.

Of course, this statement, which we might call “argumentum ex individuum” (don’t mind my pig Latin), argues from the individual in that it does not grant others the right to intervene if they are not suffering as much as those in question. The suffering becomes more important than the correct answer.

And what’s the result of this backing off?

The long-term cost of depending on Borlaug’s new varieties, said eminent critics such as ecologist Vandana Shiva in India, was reduced soil fertility, reduced genetic diversity, soil erosion and increased vulnerability to pests. Not only did Borlaug’s “high-yielding” seeds demand expensive fertilisers, they also needed more water. Both were in short supply, and the revolution in plant breeding was said to have led to rural impoverishment, increased debt, social inequality and the displacement of vast numbers of peasant farmers.

Borlaug had a robust reply. He acknowledged that his Green revolution had not “transformed the world into Utopia”, but added that western environmental lobbyists were often elitists. “They’ve never experienced the physical sensation of hunger,” he said. “If they lived just one month amid the misery of the developing world, as I have for 50 years, they’d be crying out for tractors and fertiliser and irrigation canals, and be outraged that fashionable elitists were trying to deny them these things.” 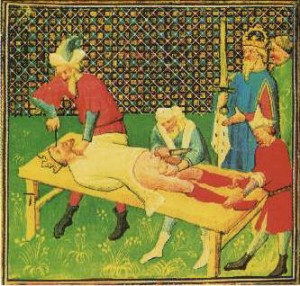 So creating more overpopulation and environmental destruction is OK since we haven’t spent a bunch of time in poverty? It seems to me this is the classic spiritual dilemma written about in ancient times: do we value the means, or the ends? If we value the ends, we might have to do some bad stuff to have a good outcome. Kind of like eating your yucky broccoli dinner before you can have dessert, or studying hard or working hard before you get a reward. The ends justify the means, but even further, we should always look toward ends as separate from means so the tail doesn’t wag the dog. This may mean we have to say NO to people, or let some die, so that the species as a whole can be healthy.

But our insistence on being polite means we must always wag the dog. We want the most people possible to like us, so we pander. “Of course whatever you want to do is OK, and we won’t interrupt you!” we say, and ignore the toxic waste cascading into rivers, the fast food restaurants replacing forest land, the proliferation of angry semi-intelligent semi-literate people who tell us we are ignorant because we don’t agree with their “progressive” dogma — these are all symptoms from the same source. Like knowing means and ends separation, knowing symptoms from cause is an essential and forgotten part of critical analysis. Our detachment from it mirrors our denial of cause/effect logic in general, because we as actors are between cause and effect and we suffer for our misperceptions of the world through bad effects, even though our intents are good — and that threatens our sense of self-control.

This process of fear becoming our goal and tabooification of unsocial but correct ideas has emasculated us. It is the primary trait of the modern time: individuals, having found themselves in a society, push back against the invisible but logical natural rules that governed early society, and replace it with a kingdom of the individual. And then the individuals quickly move to make reality illegal if it is offensive, and by doing so, make their society incompetent and send it down a slow but sure path to decay.

A group of schoolchildren who reared a lamb from birth and named it Marcus has overridden objections by parents and rights activists and voted to send the animal to slaughter.

The decision has provoked fury among animal-loving celebrities, animal and human rights campaigners and the parents of some of the children, and led to threats against Lydd primary school and its teachers, according to a member of staff.

Despite that, the school said there had been overwhelming support among the children, the staff and most of the parents to have Marcus — a castrated male who could not have been used for breeding — sent to the slaughterhouse.

They file this under funny articles so we don’t realize how serious it is. That’s one of the oldest habits of nervous groups, which is to agree among themselves that something is funny if they fear it, and then to stand around making fun of it and hoping reality doesn’t knock them over for being in denial of the obvious.

Marcus the lamb was raised by some children who realized that the cycle of life includes death. Adults couldn’t handle that. Their subconscious thought is that if we stop Marcus from dying, we’ve made a symbolic stand against death itself, and then maybe we’ll feel like we won’t die some day. But we will, which upsets us, so we want to remove reminders of death. Hence the furor over Marcus the lamb, which lasted for the duration that it took several hundred thousand other food animals to die. But remember, the symbolism is more important than reality — I guess that emasculates us too.

Government scientists figure that one out of five male black bass in American river basins have egg cells growing inside their sexual organs, a sign of how widespread fish feminizing has become.

The findings come from the U.S. Geological Survey in its first comprehensive examination of intersex fish in America, a problem linked to women’s birth control pills and other hormone treatments that seep into rivers. Sporadic reports of feminized fish have been reported for a few years.

Modern society, by destroying a sense of order and meaning to our goals, has stranded us in the means against the ends. As a result, we can’t say no to any harebrained scam or stupid idea, and so we suffer a death of a thousand tiny cuts, each time being made weaker by our inability to pick up a baseball bat and fix at least one of the sources of these cuts.

It’s a problem at a level lower than that of politics, religion or even social decency; it’s at the lowest level of all, which is how we program our own brains. Right now we’re programming them to self-destruct via passivity, which means that any smart person gives up on a true idea in order to make a pandering socially-acceptable partial truth instead. By doing so, we domesticate ourselves, including castration. And by so doing, we give up the reins and stop steering ourselves toward a sensible future, causing us to encounter endless tiny cuts creating a river of blood.