How To End Our “Gun Problem” In America 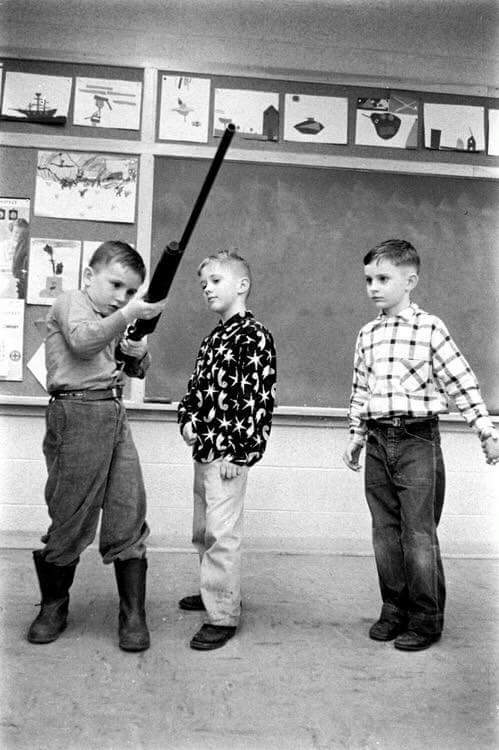 While the gun debate nitwitters on and works itself into irrelevance, it is worth pointing out that the contrast between Left and Right prevents us from seeing eye-to-eye on this issue.

The Left thinks there should not be school shootings, which really is a form of denying what kinds of hell we have created for our kids to grow up in and grow up into. When your life is a dozen years of mind-numbing propaganda disguised as education followed by a cubicle job until you die, a marriage and divorce producing kids who hate you, and living in a failed civilization where anything good you do is quietly shuttled off to a landfill, perhaps a school shooting is an economically rational decision. Life is already over, so at least go out in a blaze of glory before suffering seventy years of misery and tedium.

The Right asks what actually works regarding school shootings and guns. Luckily, we have some data on this. We can look at inner city gun enforcement to see what will work in the cul-de-sac whitopia exurbs:

One purpose of stop and frisk is to deter criminals from carrying guns, in order to minimize spur-of-the-moment shootings. That deterrence has taken place. Street gangs now keep â€œcommunity gunsâ€ in communal locations rather than on their person, to avoid a gun possession arrest if they are stopped. The cityâ€™s astounding homicide drop â€” 82 percent from 1990 to 2009 â€” is driven by a decline in gun crime, which disproportionately affects black males. In 2011, guns were used in 61 percent of all homicides, but 86 percent of black males between the ages of 16 and 21 killed that year died from gunfire, according to N.Y.P.D. data.

As the Left is fond of reminding us, with two 1500 mile borders and several thousand miles of open coastline, there is no way we can prevent the smuggling of just about anything into the United States. If Russia and China decide to nuke us, their best bet is an army of drunken boaters transporting their bombs via RV to the major American cities.

In other words, criminals can get guns. What stops them is constant enforcement not of their acquiring the gun, but having it in public. In other words, go after the perps, not the guns, and by the fact of your constant interdiction of their efforts to do bad stuff, their behavior will change.

School shootings are difficult for the same reason kamikazes and suicide bombers are. Normally we deter people with the threat of death by violence, but when they intend to die anyway, that does not dissuade them. What does is the threat of failure.

A school shooter arrested outside the front door without any dead is a failure. His fifteen minutes of fame go from glory to humiliation, and he still must endure the world that he rightly loathes. Instead of all of this nonsense about regulating guns, we should regulate people who are likely to be school shooters.

This in turn requires us to face the difficult truth about life in the West. Many of the people around us are crazy, not to the level that requires clinical care, but they are not good, either. They will indulge in selfish and antisocial behavior to the degree that we allow them, although they will avoid any acts that might result in public criticism. Even worse, they are aimless; their lives are driven by appetites, compulsions, desires, trends, and competition, but they have no direction of their own. They just react to what is there, and their minds are incapable of clear analysis and ideation.

In the past, we regulated such people by flinging them into lower social classes and limiting their influence on just about anything. It was harder for them to get weapons, or have any influence over others, because those were the realm of the upper classes who were saner, smarter, and morally alert to a greater degree.

When we unleash our serfs and servant-caste people through the magic of “equality,” suddenly we are awash in insanity which cannot be checked by the superior wisdom of better people. It is not surprising that this has made a hellish world full of the deranged who shoot up their schools.

IQ And Voting | A Familial Model For Civilization