Solving problems through an indirect and creative approach, using reasoning that is not immediately obvious and involving ideas that may not be obtainable by using only traditional step-by-step logic. – Wikipedia 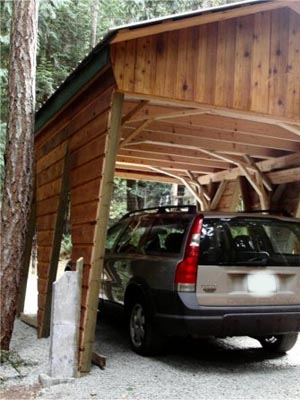 We donâ€™t see very much of this. We donâ€™t even recognize it, mostly, let alone promote its use.
I do it. And a few others. Problem-solving, par excellence.

Our society is built upon patch after patch, fix after fix, nail after strut, glue after tape…
It lacks a strong foundation, which is fine, for a while. Time tests the weaknesses, and time always wins. As the edifice begins to sag, we prop it up, as it begins to lean, we lean the other way. As it commences to crumble, we run around in circles, like threatened termites, sending soldiers to the gates to fend off who knows what.
It must fall.

Unless we are able to understand what is wrong, dispense with what usually passes for logic, and substitute something else. Something that works!

What is this picture, at the top of the article? Well: itâ€™s a buttress. The first of six. Custom designed for the job at hand. Which is a response to the absence of a proper foundation. This is something I specialize in: I like to build things, but time and again, in my enthusiasm to get on with the building, I neglect to start from a proper foundation. This is quite common, actually. It can have dire results. But I have something most people donâ€™t seem to have: an unshakable belief in my ability to improvise, adapt, and make use of whatever is to hand. It has never (so far) let me down.
The post is through-bolted into the poured concrete, in two places. The base projects re-bar into the ground. The geometry of the buttress supports the post from up, down and sideways motion. The mass of the concrete acts as a shock-absorber to dampen out shimmy.
But surely, there are better ways to build something? After all, with the chronic shortage of lateral-thinking, who can depend upon it?

With all we know about the worldâ€™s many cultures and societies, along with what we know about those long-since extinct, might we not be able to actually design a basic civilization, rather than just start with some random mud huts, and continuing on from there?

What is the best, longest-lived, most stable spiritual base?
The most benign moral code?
The most versatile language?
The most suitable architecture?
The most successful value-system?
The most beneficial form of government?
The ideal food-producing technique?
The kindest use of the environment that supports the rest?

This, I think, is the real meat and potatoes of diversity, and – dare I say it – multiculturalism.
As opposed to a horde of aliens wrecking the established order merely by weight of numbers and exposure to it, while being encouraged and subsidized by a suicidal host.

To take the best from the best, and adapt it to its new environment, thereby making it into something new and valuable. Long-lived and worth maintaining. Able to actually support those who dare incorporate it, and shelter them from the ceaseless march of entropy.

Every civilization has something, or things, to offer. No civilization gets to be a civilization without having something to recommend it. And why should these things be lost to time, abandoned and forgotten? They were all things that worked.

A strong foundation is the best thing to start with. The sensible thing.
But failing that, a retro-fitted piece of laterally-thought-out genius may suffice.
The one thing that will not suffice, is to continually add more and more cards to a quivering, unstable, ready-to-collapse edifice, that nobody thought-out in the first place, and is inevitably going to come crashing down to nothing.

The Vicious Cycle | Self destruction