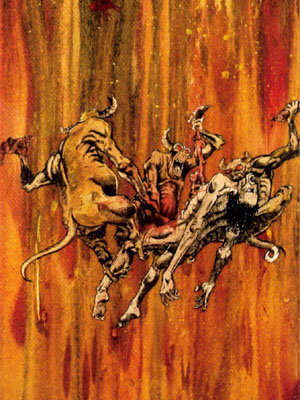 The nature of our time is that we see “politics” and “leadership” as being the same thing, when in fact the former is one method of the latter.

Starting after the middle ages, a new philosophy began to emerge which was based in the individual. It rejected this reality-first classical view and replaced it with the notion that the individual is perfect, and barring unfortunate external influences, would always do what is necessary to produce a Heaven.

From this new philosophy came liberalism, progressivism, leftism, anarchism and even socialism and Communism. These ideologies are different degrees of the same ideal, which is that the individual is sovereign over nature and tradition. As a result of that outlook, the individual becomes a passive recipient. Government is how we solve problems. Institutions handle crises.

In short, they invented politics. In politics, there is no leadership based on ability. Instead, it is based on the preferences of individuals. Someone gets to the front of the audience, makes a speech, and if enough people like it, that person is the new leader.

However, politics has proved a source of complaint for most people. It seems that no matter what we do, eventually we get to the same point: the votes are bought, the big money interests win out, and people end up hating the politician they cheered for just a few years ago. In the meantime, that politician has somehow set up a scenario by which they’re going to be very rich when they get out of office.

The question that people are afraid to ask in such situations is the one that is analogous to yanking the rope found trailing away from a tent. If we all have the vote, and thus the power, how is it that we end up in the same debacle every time? People shrug and either claim the process was flawed, or that some other force intervened. Straight into paranoid territory.

Part of the reason for their unwillingness to look too critically at this situation is that it is convenient. In democracy, we think about politics during election season, but otherwise it’s out of our hands. It’s a matter for conversation at that point. We don’t need to act on a daily basis toward solutions to our problems; we delegate them, and once every four years we have a scapegoat ritual to banish them.

In contrast, the classical society provided that every minute of every day was a chance to banish problems. In its view, problems originated in human choices and specifically, in reality-denial (hubris) and egomania. If a society wanted to succeed, it sought to discipline its citizens toward moral and personal discipline, not set up some institution to preach to them.

Modern politics tends to treat society like a fire and democracy like water. It always applies more, in the hope of eliminating the crisis. But the crisis grows stronger, as if we were pouring gasoline on the fire. At what point do we turn around and place the blame not on the elements of the situation, but on the choice of situation itself? Politics itself is to blame, because it’s the wrong choice of leadership.

Progressive liberalism has gripped the West since the fall of the middle ages. It promises a Heaven based on all of us being free from morality and other requirements to observe realistic choices. Its underlying theme is that our behavior will no longer divide us into peasants and kings, but unite us as equal cogs in the machine.

However, much like the lotteries that people seem to compulsively pursue, this means that it is Heaven for some, but Hell for most. Having lost the sense of moral discipline, they become passive and soon can’t manage their own lives. Worse, most of them aren’t equipped to do this well in the first place. Social chaos spreads like herpes at an asylum.

While it never makes sense to reject our political options, those of us who hope to re-forge this ruined time into a functional civilization against must remember our goal. Politics and liberalism are one and the same. They are both dysfunctional. Both seek to evade the weight of moral decision falling upon the individual and society.

By so liberating our behavior from its consequences, they both give us “freedom” and “equality” and “liberty,” and also create a void that replaces the certainty of knowing what is right and wrong, and what will succeed and what will not. In other words, our attempts to create a Heaven through outside forces have created a Hell within, and nothing will improve until we cast aside this erroneous idea.

Secular Traditionalism | What doesn’t get measured