Have an American Family Instead Of An Amerikan One 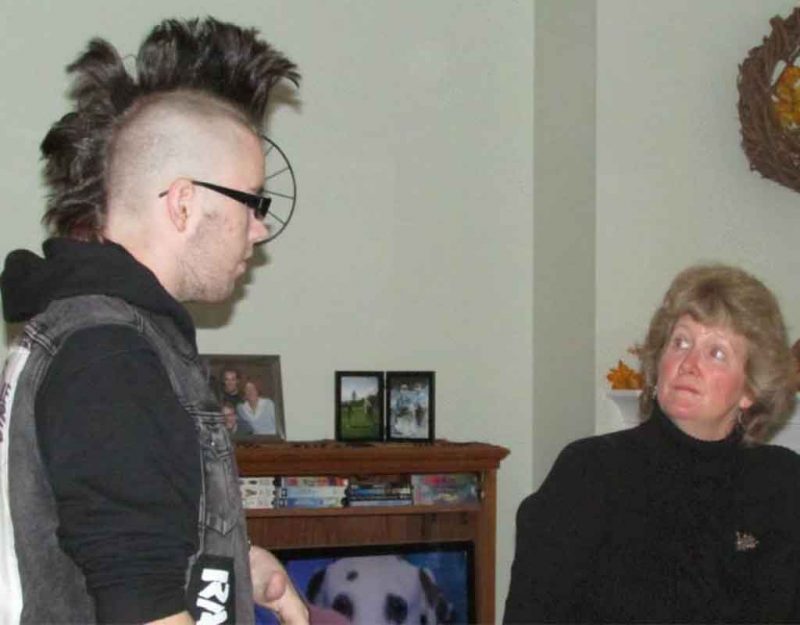 An old Greek riddle retold by Sophocles in Oedipus Rex goes as follows. “What walks on four legs in the morning, two legs during the day, and then on three in the evening?” To get past the Syphinx, you had to answer “Man.” The baby crawls on all fours, the adult walks around, and the elderly require a cane. The takeaway here is that near the very beginning and very end of a human being’s natural life, we are about as helpless as a natural creature can get.

Much of how our lives are organized involves the feeding and care of people we care about at either end of the human age spectrum. Within a strong and caring family, we work out a rough generational deal. Mom and Dad feed us, clothe us, and send us to school whether we appreciate that or not at the time. As some of us marry and move out, the parents return to help out with the grandkids and spoil them rotten whether we appreciate that or not. At the end, as Mom and Dad come close to the end, they rely on us. They need rides to appointments, help with remembering bills and dates. Perhaps, at the end, they even need reminding who everyone in the family actually is.

Mom and Dad end with the same needs we pressed upon them as toddlers, but also expect to be respected as our elders. The dissonance can lead to stress and emotional pain. Watching the downfall never gets easy. Do we have a moral obligation to do this for our parents? The answer depends upon who you ask.

A woman has sparked a debate over whether caring for elderly parents should be an obligation, after revealing she and her husband recently moved closer to their aging in-laws. Writing on Mumsnet, the anonymous woman, from the UK, explained that she finds it ‘sad’ that the average person doesn’t want to look after their elderly relatives. The woman went onto explain that she feels like she’s in the minority of people who try to care for their elderly parents. But many who responded to the post labelled the woman ‘naive’ and instead argued that in some cases it’s too ‘heart-breaking’ and suggested that sometimes a care home is the best option.

The old joke goes “We can always choose what home we put you in, Mom.” How did we ever get to where the bratty children saying this were no longer entirely just kidding? Mary Eberstadt puts forth a theory that The Sexual Revolution can at least bear some of the responsibility.

Eberstadt finds the big bang of these troubling trends in the sexual revolution of the late 1960s. Abortion, birth control, and a general liberalizing of sexual mores led to a breakdown of the family. This breakdown has led to several generations of people in the West who struggle to attain any true sense of identity, and thus go looking for one.

To piggy-back further on this, think of how many times you’ve heard of tight-knit families being insulted as clannish. Or a good house wife derided as house-proud. Maybe someone who mothers more than maybe two children gets called a brood-sow. And those who chose not to form families or whose circumstances made this choice more impractical than they were determined? They often assuage their regrets by denying respect to those who have formed families. It’s a particularly pernicious form of sour grapes. People didn’t just want to do their own thing. They also wanted to enjoy all the same adult status as people who reinvested themselves completely in bringing about a future generation. They wanted all of the credit and respect afforded to adults who attended to all of the adult responsibilities, while they had twice as much free time and money.

Another possible cause of perfectly rational adults not caring much for Mom and Dad could be who some of the mom’s and dad’s are. Boomers catch a lot of flack both here at Amerika.org and in general. This grapeshot isn’t aimed at the ones who sucked it up in the ruins of Hue or the mud of Khe Sanh. These are the ones who tried the brown acid in the mud of The Dorkstock Festival. There are huge numbers of adults who fathered or even bore children as accesories and afterthoughts. They were busy chasing self-actualization or the corner office.

So the next generation retaliated. They got Mom and Dad’s attention the hard way. Or maybe they just gradually withdrew. Then one day they had the job and the apartment and no intention of communicating with the parents again accept en dira necessitas. And they can always vote for more socialism so that drooling, mongoloid parents who they don’t really love anyway can become a problem for “the rich.”

And yet there’s a way to crush this pernicious and dystopic cycle. We can bring ourselves back. We can make children who are like us, with people who are our own. We can withdraw them from the ennui and frustration and amongst ourselves, have a real community. As it is, here is where an awful lot of us truly are. It is nowhere with regards to our families or our people having any sort of a meaningful future.

What modern American parenting culture does instead is turn parenthood into another job among others, instead of a special relationship that is key to a person’s lifelong development. If this is the perception, then parents can, and probably should, outsource the work of parenting to professionals at a daycare or school and not worry too much about relating to their children. Ideally, the kids will make friends, learn skills, and eventually appreciate what their parents have provided. Not surprisingly, then, many parents never really create a close bond with their children. True, they care enough for them to feed them, keep them safe, and make sure they learn something at school, but they often do not know or love them all that much — or at least their children don’t feel like they do.

We have time to get this right. !DOOM! is never completely upon us until it is. The future awaits those who bother showing up for it. It will provide for those who deserve this level of courtesy. It is up to you, in your own household and amongst like-minded friends to make that happen. One day, like the old man in the riddle retold by Sophocles, your two legs won’t be enough to cut it. You’ll know that you have failed and that you are in for it, if your snot-nosed kid ever tells you this.