Hatred of America is rejection of globalism 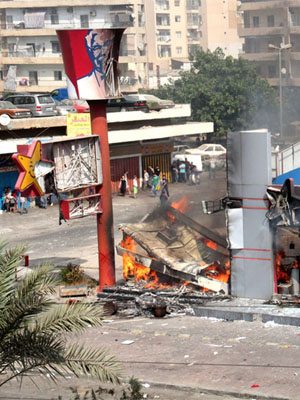 As we’re fond of saying on this blog, Amerika is not a place. It’s a type of society created by globalism, which is the standardization of all humanity for the convenience of business and liberal democratic politics.

Globalism spreads like a hip fad trend. You see your neighbor has Coke and a Big Mac, which makes you think you’re missing out, so you demand them too.

Soon everyone in the village wants those signals of living the good life, even though if they were alone on a hillside they’d admit that Coke is just sugar-water and a Big Mac just a cheap sugary hamburger.

Unfortunately, not everything we want has good consequences. Further, in groups, human beings tend to want things that produce short-term rewards and long-term destruction.

In fact, crowds tend to produce a lowest common denominator (LCD) demand, and are oblivious to consequences beyond the next pay period. This is because crowds are ruled by what they have in common, which is assessed by their weakest link.

Globalist LCDs will destroy your culture. Modern society brings sexual liberation, junk food, television, drugs, alcohol, liberalism, civil rights, rock ‘n’ roll, atheism and consumerism, and soon your country is turned into yet another soulless plastic modern shopping mall like the ones in America and Europe.

This new regime will be hell because it’s all surface and no depth, as LCDs tend to be. To a casual glance, it’s more convenient and enlightened. Under a penetrating stare, it’s a denial of all individuality and personal values, replacing them with external regimes of obedience to the needs of the herd.

The outrage in the Muslim world is about more than a film. The rage at globalism, which is an invisible enemy that no one can describe that spreads undetected through socialization, found a touchstone in this film.

The riots are a rejection of the globalist empire that’s gotten too cute about bringing “democracy” to places as a means of subverting and destroying them. This is as much about McDonald’s and Coca-Cola as it is about American foreign policy.

This is not to say that conquest of the Middle East or Pax Americana are bad things. Outside of Israel, the Middle East shows signs of greater decline than we have in the West. Smashing unstable regimes who are seeking nuclear weapons is probably a good thing.

Even further, the rule of the American superpower has brought to our world unprecedented stability. While it was birthed through the morally ambiguous conflict of WWII, that war started in Europe and determined who would run Europe, but gave us no good options.

The Nazis were brutal, the Soviets worse, and the UK/France too punitive, as the first world war showed us. American rule solved the problem. Since that time, Americans have done a good job of keeping Bolshevism and anarchy out of Europe.

What is being expressed in Libya, Yemen and Saudia Arabia is outrage at an enemy that no one can see. No one knows how to identify it, or to explain others what is going on. Globalism is like West Nile flu of the mind and soul.

When given some trivial pretext like the sloppy Islam-hating film that the American government is now trying to censor, the rage finds a surrogate and detonates all over it.

The great irony is that by becoming unstable, these regimes give their citizens a legitimate cause to want the other option, which is globalist democracy, consumerism and nice, stable deep-fried junk food.

What is socialism? | How ordinary people ruined the West