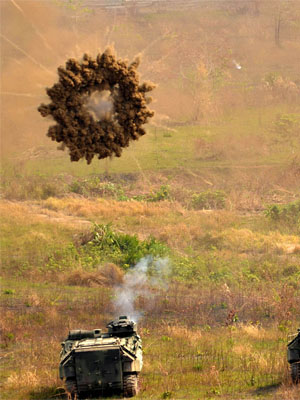 As creatures who hope to survive with both body and psyche intact, we defend what we have by displacing our fears for it onto other things.

Like witch doctors chanting incantations, we carefully isolate what we are afraid of and cast it out of our lives. We go into denial that it has ever existed within us, or in our lives, or even in whatever civilization or political entity that we are part of.

If confronted with the part of it that exists within us, we become defensive, and in groups this defensiveness morphs into outrage and creates a political event. The simian howling does not end until the symbolic enemy is declared defeated or at least illegitimate.

What we project most is what we fear rules us. In our society for example, owing to our egalitarian roots, we fear the animal part of nature that makes us unequal. We fear that we could go into a fight, lose, and be no more. Or simply that some things are beyond our grasp.

As a result we live in a constant state of measuring whether we are equal enough, which we do by scanning to see if anyone in our social group has more than we do.

This is of course a recipe for hatred, resentment and passivity. It is a disguised and cancerous long-term occupation by the hatred that we fear. That hatred would put our society to the lie, and so we project it outwards.

First we attack those who are beyond the social boundaries we elect through morality. Criminals have hatred, not us. Then we project our fears of our own behavior into chosen targets, usually foreign leaders.

And we can believe this, for up to 15 minutes at a time, as we interact with a society full of people mad with resentment. They hog lines in the grocery stores, throw litter on the ground, vandalize their own cities and drive like executioners.

No matter how many scapegoats we create for our hatred, bitterness and resentment, the evidence is against us. Our society is held back and sabotaged by our behavior. Even as we drive the scapegoat of hatred (a “hategoat”) over the cliff, our hatred shows in our faces. And our fear.

We pretend that the frustration is not there with the general incompetence of government and private sector alike, the apathy and obliviousness of our fellow citizens, the everyday dysfunction and failure to equipment and institutions.

But the frustration is there. Instead of rising to a peak every few years, it remains as a constant background hum. It scares us that it is omnipresent. So we project it onto others, and destroy them, hoping that through this sacrifice, we absolve ourselves.

Maturity | The smart versus the clever