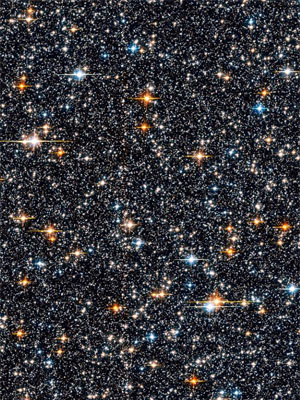 Imagine that you are traveling on a train. It may be moving at a high speed, but that doesn’t mean you can’t sit back and enjoy your morning coffee. Now picture your fellow travelers. Perhaps they are sleeping or reading the paper. Most look as if they are only half-awake, while at the same time, collectively ripping through the landscape at 80 miles per hour.

The train is moving but you are not. At least it doesn’t feel that way. But try looking out the window.

That’s the world. Trees, bushes and fields rushing by in a blur of green. There are some cows grassing on the fields, visible for a few second. Maybe some birds. Isolated houses now and then. And above it all a brightening sky. The sun is coming up

You’re on your way from the ‘burbs to the big city. Going to do your important job in that tall gleaming steel and glass-building. And this world outside the window – it’s got nothing in particular to do with your world. It’s just a rolling tapestry. You barely notice it in the morning, nor in the evening. It’s just there. There when you’re tired and in between destinations.

This world outside the window appears to be rushing by. But in reality, you are the one rushing through it. You and your fellow travelers, still immersed in a drowsy, half-asleep state. There’s a busy day ahead of you, so might as well relax a bit while you still can.

When you get to the office, it is already buzzing with activity. You stuff the last quarter of a 7-11- croissant into your mouth, chew hastily and wash it down with a mouthful of lukewarm coffee.

Don’t just stand there – get to work!

Everybody is busy. You’re not exactly sure what they’re doing, but you know that you should be doing something as well.

So now you’re on the move! Answering e-mails! Crunching numbers in Excel! Going to a couple of meetings… and drinking loads and loads of coffee! Just as you did yesterday and the day before. Just as you will be doing every workday for many years to come, the way things are looking out.

Depressing? No time to think of that now. You have to “get things done.”

But these things are never really done. As soon as something is finished, there will be at least two or three new things waiting for you. So ironically, the more you actually “get things done,” the more there is to do. Sometimes it feels as if you are doing nothing at all.

“Well, that’s just the way it is,” you think, “and whining about it is no use.” You are right of course.. But how did things come to be the way they are?

The answer is almost too simple: humans are like mirrors. When our surroundings appear active, we instinctively tend to look busy as well. We instinctively feel that we should be busy.

Yes, humans are like mirrors — and the modern world is like one great big hall of mirrors. We’ve lumped ourselves together in big cities and smaller suburban communities, reflecting activity and movement in the one, and rest and recreation in the other. All in perfect tune with what all the others are doing. Society has become a giant well-oiled machine.

That humans instinctively synchronize with each other is the key to civilization. We work together for a common goal. That’s what humans do. But along the way, we’ve lost contact with the nonhuman world. That old world gradually shrunk in importance. Now it’s just there.

But there, back in the natural world, are the infinitely bigger, slower cycles of motion and rest: night and day; winter and summer; birth and death. Once upon a time, the day was for work and the night for rest. The seasons determined when to sow and when to reap. We had mythologies framing life and death, placing the individual in a bigger context. These things kept humans in tune – not just with each other, but with life itself.

It all had a meaning. It had to have one. For humanity had to act in accordance with nature. We had to reflect the bigger cycles of movement and rest as well. It wasn’t sentimental; it was pure survival.

Now, technology and the complexity of a consumer-based economy mean that we can work whenever we want- or have to, day or night. Globalization brings us goods from all over the world in neat little packages – the seasons are no longer an important thing to live by. And as a final consequence, we no longer feel we need any ‘superstitions’ to make life important for us, the individuals. Mythology is gone. We can no longer use it.

And so, meaning itself has become a myth.

From the rationalist point of view we have everything we need. Humanity is no longer chained to the natural world. Survival is a question of going to the supermarket. There is nothing more we could reasonably ask for. But does the reflections in the hall of mirrors not grow evermore distorted and grotesque?