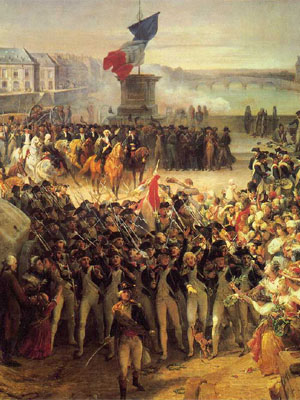 A good deal of virtual ink has been spilled trying to re-invent politics so that there is a third way, a fourth way, a new way, a super-old way, or even a non-way.

While I respect those who attempt this, and recognize that most of them are better writers than myself, I have not for some time been able to accept the need for a third path.

Over time, I have come to see the perception of a need for “another way” than conservatism to be pointless, first because it is dishonest, and second because it is parroting of the leftist narrative.

In the leftist view, leftism/liberalism is a viable alternative to conservatism, which is just another lifestyle choice. While the neoconservatives and new right are afraid to be rude on this topic, a sensible view is that leftism has always been and always will be totally illegitimate.

Only in the leftist view do we consider outcomes so meaningless that we view any political choice as “an option” and don’t consider that those options must be anchored to a showdown with their own application.

There’s a fallacy in this which is that when one party is in power, it’s easy to blame just about anything that happens on their leadership. Natural disasters, overpopulation, inevitable wars, periodic economic cycles all become their problem.

Leftists reacted to conservatism because conservatives were in power when leftists discovered that their civilization was speeding downhill. The leftist response was to seize power and kill objectors, and then formulate a mirror-image inversion of conservatism as their ideal.

This all happened in France, around 1789. All of our modern leftism/liberalism represents degrees of the philosophy that ensued, which was the negative mirror image of what conservatism was perceived to be.

However, conservatives still see leftism as what it is, which is an attempt to find an alternate way through life other than by applying logical restraint to our actions.

In the conservative view, which is commonly called “ends over means,” you must first decide what your goal is, and since that’s open-ended, you need to look at past results and pick which one you like best. Then you pick the methods (means) that achieved that.

The leftist view is an inversion of this. Instead of picking a goal, you pick “means over ends” type analysis, which is where you decide how you want to behave and view yourself and act like that, and you then hope the ends turn out OK by magic.

Leftism will always be socially popular because it removes all accountability from other individuals. We all act as we see fit, and consequences are ignored. For this reason, leftism is addictive, because it gives us an escape from feeling the weight of responsibility and worse, what we could have had if we had acted more sensibly, and makes our escapism seem like a moral good. The addiction occurs because when you ignore ends, you inevitably end up with bad ends, and have to explain those away by blaming conservatives.

But leftists need conservatives, because without someone to blame, they must inherit the consequences of their own actions. Conservatives have had trouble fighting leftism because we tend to watch the disaster unfold, then rush in to fix it, then once stability is restored, watch the people pick more leftists who then restart the cycle.

In the 1970s, when it became clear that in the West liberalism had won albeit in a neutered capitalism+freedom neoconservative form that allowed us to differentiate ourselves from the Soviets, people began looking for that mythical third way. Like a path to Atlantis, it beckoned.

However, no one has quite found it, mainly because the level on which the left/right choice made is so basic that conservatism is the default, and leftism is the deviation. How do you deviate from a deviation? The only sensible path is back toward the default. Conservatism is the default because like the scientific method, or any study of reality, it is grounded in comparing end results of actions to choose the type of action we desire. That’s the only sane approach to leadership.

It’s time to stop with all the fluff about how conservatism is dead, how it can never win and other hand-wringing. What conservatism needs is for us to stop being dramatic and accepting the leftist narrative at face value, and for us to start behaving more like people who have self-interest at stake. We choose a functional society instead of a leftist society.

Leftists need to be forced to acknowledge that we simply want a different type of society, and that they will not be welcome in this society. Conservatives lose when we pretend our beliefs are compatible with those of the left. We should instead point out that societies are formed by a collection of rules and values, and that the conservative version of that can’t work with any leftist rules, and vice-versa.

We should then reconsider states’ rights and other plans that allow leftist states to separate from rightist ones. Let the leftists have, and pay for, the paradise they envision. Like California, their states will fall one by one.

But what comes of this is that conservatism will finally stand on its own. It will be seen as different. It will rise above the level of insanity established by leftism. Election 2012 is a good start, since it has forced the groups to differentiate. Let’s continue this process until separation is complete.

Value and values | The easy way