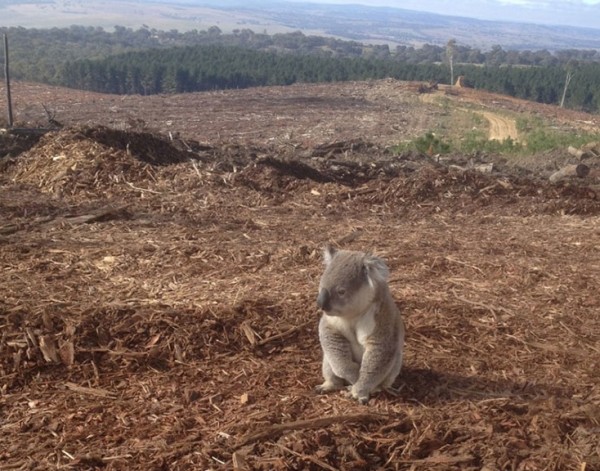 My quest began with environmental concerns, and led to conservatism. The key point at which my thought pivoted was the realization that human destruction of the environment occurred because humans could not anticipate the consequence of their actions, or did not care, simply because no one is enforcing the principle of reality on them. Instead they exist in desires, judgments and feelings which focus on the nexus between the individual and the social group, leaving no concern for reality, God or nature (which are conflatable terms).

Consider this burst of juvenilia — in vino veritas and in childhood the same — from the German black metal band Absurd:

Evil in the forest in Germany’s Green Heart !

Hateful savages, strong black minds
Out of the forest, kill the human kind
Burn the settlements and grow the woods
Until this romantic place is understood !

Animals, beasts, horrid landscape
Cause there are no signs of human living
When you look around no human living
Now this romantic place is understood !

It conveys a sentiment most of us find appealing: remove the humans, and leave the forest, which is beautiful in its pristine state. They did not intend it as a policy statement, more as a symbolic explanation of their turning away from what society regards as “good” to what it sees as “bad”: the removal of human life.

And yet they capture the essence of nature: a romantic, stormy and wild place which is not rational like humans, meaning that it does not make decisions by justifying them with higher principles. It responds only to cause effect reasoning, and it sets its goals by need and passion alone. In that is a higher reasoning than our human “higher” reasoning.

The environmental problem of humankind originates in bad governance. We allowed ourselves to grow with no greater principle than “we have more people, so we cut down more trees.” We then granted each person desire limited only by money, which means of course that they will all want houses and four kids and lots of products to brag about and cars to drive. We called this equality but really it was murder. Murder of our own future, and murder of our environment, which we may call ecocide or multiple genocide of non-human species.

I do not subscribe to the romanticization of nature, only to the knowledge of the romanticism of nature. Nature wants to kill you. Without the houses, medicines, soaps and barriers the force of nature would infest you with parasites, kill you with diseases, or outright tear your limbs apart. And yet that is its romance. Nature has no subterfuge, no sabotage and no deception. It is merely a struggle for survival by consumption of other things. (Somehow, trees have escaped the worst of it. Perhaps they are the wisest beings on the planet. I know that in their presence, I feel a great ancient wisdom that my puny human mind can barely begin to grasp.)

All of our environmental problems could be reduced by good leadership. Good leadership treats its people as a whole, not as individuals or a collective in which all must receive equal treatment. Like nature, it picks the best — the strongest, the healthiest, the most beautiful — and it elevates them above the rest because it wants more of them. It excludes those who contribute nothing or are evil. It rewards those who are excellent so they may enforce excellence on the others.

Our reasoning since the fall of the kings consists entirely of intermediates. Instead of leading, we choose paths by what is popular. Instead of finding the good, we treat everyone as an average (“equal”). Instead of having goals, we make each person an island in himself where his goals are the whims he has, which means those goals change constantly and amount to nothing but a steady accumulation in the landfill of the vestiges of his passing fascinations.

What does nature need? To be left alone, in enough land for itself. That means no fences, roads or weekenders in certain areas. Just forest, or prairie, or even desert in its pristine state. To do that however we must do what is eternally unpopular and tell people no. No, they cannot have houses in the outer suburbs. No, they cannot immigrate here. No, they cannot buy large cars. No, they cannot open another McDonald’s or dry cleaners and make profit from it. Leadership says no to those whose goals are not good; in our current society, we pretend that merely stopping some who are bad is the same thing, but it is not. Good leaders filter all that is incompatible with goals, instead of defending themselves lamely against known evils while the unknown slip past in droves.

Those who think you can be an “environmentalist” are nonsensical. The problem of the environment is the problem of human leadership. The problem of human leadership is egalitarianism, which means we cannot say no. Until the notion of equality falls, we will continue to grow out of control and consume more resources, no matter how many useless “green” products we produce or above-average IQ people we convince not to breed. Ecocide is our act, and it reflects our poor choices, thus we must reconsider how we make choices. Anything else is a surrogate act that will not achieve its goals.