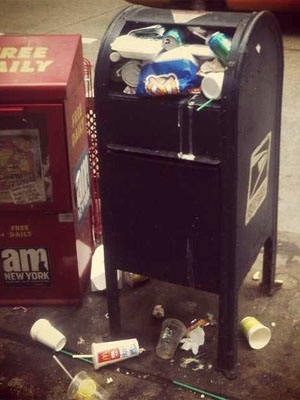 Our human tendency is to externalize threats, so that we can contain them in a symbol or finite and tangible enemy.

This is a denial response to the more complex underlying reality, which is that most threats to us come from our own undisciplined and illogical behavior.

Similarly, we want to blame carbon monoxide for the environmental holocaust we are creating. However, our ecocidal damage is not limited to carbon or climate change.

Instead, using our Occam’s razor approach, we should look at what is most likely to be the environmental problem of any species reaching maturity on any planet: overpopulation, and the over-consumption of land it entails.

This is not a problem we can externalize. It is inherent to the growth of any civilization, no matter what species. Resources are finite and exploiting too many of them crowds out other life.

External threats are comforting because they are out of our hands. There is nothing we can do, except destroy them when they become troublesome.

Internal threats are within our control, but are also pitfalls based on common perceptual errors. For example, we overeat, or gamble away our money, or become addicted to drugs/drink and sex.

Any population can face a number of internal threats. It can grow too big; it can become unstable; it can poison itself with bad hygiene, or throw itself into instability with delusions.

It’s the growing too big that is finally being recognized:

Human numbers have risen from one billion to our current population of seven billion in 200 years. That is pretty short order, and we have got to that state through our cleverness and inventiveness. But that cleverness and inventiveness are now the sources of all the global problems we face today â€“ and those problems are only going to intensify as our numbers continue to grow. It is really important to talk about overpopulation. Far too many scientists still refuse to discuss the issue. Yet it lies at the heart of all our environmental problems today.

…Our problems are not just those concerned with carbon emissions. There are so many other things â€“ overfishing, destroying habitats and eradicating species â€“ that we need to change. It is either that or sit and do nothing which, in effect, is the position we have adopted so far. Science has spent far too long hiding behind caveats. We have to come off the shelf although I suspect it may too late now.

With population rise comes another problem: we like to cover things in concrete. We want cars, so we create many more roads and parking lots. These are of a modern type which is completely covered, and reflects heat back into the atmosphere; it also prevents rainwater from being absorbed or groundwater from reaching the surface to evaporate.

What these do is effectively divide up the remaining natural and semi-natural land (backyards, gardens) into tiny bits. These bits confine plants and animals, because around them is high risk. They also concentrate both resources and waste.

The result is both a breakdown of the natural order that uses water exchange to cool itself, and the creation of very effective reflectors of light and insulators of heat within the earth itself.

Anecdotal evidence suggests that whenever an area gets “built up” and concreted, the climate changes for the warmer and drier.

Global concreting is an internal threat because how do we oppose it? Each of those concrete slabs is making some human being’s life better. There are dreams in those stores, restaurants, hospitals, etc.

As once source points out, if our population doesn’t grow, the economy stalls. If we stop expanding, and pouring more concrete, the whole house of Ponzi cards comes crashing down.

That’s your retirement fund that will become worthless.

The end result of this typical debacle is consumption of nature and its replacement with humans. This is also the cause of all of our environmental problems. If we left enough natural land, earth would regulate itself, absorbing our poisons and balancing resources.

But we press on like maniacs, denying the internal roots of our problem while perpetuating it with an almost demonic intensity.

This is at its root a war on beauty. We, humans, fear the world outside of the human. Other humans make us feel like there is some kind of significance, meaning or importance to our lives. That makes us feel better about powerlessness and death.

However, that view is threatened. Nature is not only lawless, but disinterested. We can die in the forest without the act having any more significance than ants eating an avocado. That knowledge makes us resentful of nature.

In our weird human way, we want the world to be human like us, and both under our control and affirming our important. Since nature does not do this, we wage war on it, hoping to completely replace it so that only our voices and judgments are heard.

With that imaginary external threat, we also kill a unique beauty. With it dies the hope that someone might wander deep in a forest, be lost in its majesty, and replace their concerns about death and powerlessness with a sense of awe and appreciation.