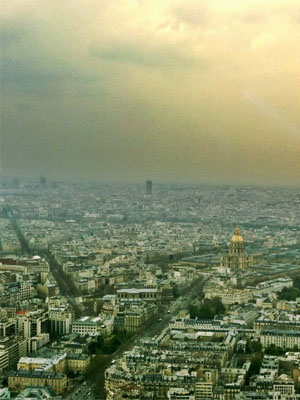 The foes of sensible environmental policy want you to believe that there is a binary question to conservation. Yes, you believe in global warming; no, you’re a denier — there are no other options. Either you’re good or you’re not.

Many people are suspicious of global warming because it’s one of those-easily abused catch-all concepts like “Jesus told me to do this” or “the Revolution demands this, comrade!” We instinctively do not trust the great ideological crusade. That’s sort of throwing the baby out with the bathwater, since some ideological crusades are presumably worth undertaking. That is, if we assume there are ideologies based on consequences in reality and not wishful thinking (“morality”).

As is fitting in a time of liberal politics, based in liberal democracy and with even our conservatives cementing their ideas with liberal goals, global warming is used to justify the liberal crusade for global redistribution of wealth. The liberals themselves don’t believe it, but because their ideology is based on personal satisfaction through socialization, and not results in reality, they don’t care. It sounds good and brings everyone together.

This of course puts humanity in a terrible place: as far as our public discourse goes, a very important issue has been tied to a divisive ideology. There is no way to win here except to give in to the liberal side, which half the population will not do. That in turn gives the other half a chance to act like Jesus On the Cross as they lament the ignorance of “the others.”

As a result, to put it mildly, the debate on global warming is poisoned, and it was poisoned by the left. There is nowhere to go with this issue now except to ignore it until the end. Caught in the middle are those of us who think something weird may be going on with the climate, but that global warming is not an accurate description.

What else could be to blame?

Land cover changes that alter the reflection of sunlight from land surfaces (albedo) are another major driver of global climate change. The precise contribution of this effect to global climate change remains a controversial but growing concern. The impact of albedo changes on regional and local climates is also an active area of research, especially changes in climate in response to changes in cover by dense vegetation and built structures. These changes alter surface heat balance not only by changing surface albedo, but also by altering evaporative heat transfer caused by evapotranspiration from vegetation (highest in closed canopy forest), and by changes in surface roughness, which alter heat transfer between the relatively stagnant layer of air at Earthâ€™s surface (the boundary layer) and the troposphere. An example of this is the warmer temperatures observed within urban areas versus rural areas, known as the urban heat island effect. – Eo-Earth

As said around these parts before, global warming is convenient because it groups all of humanity’s destructive effects on the environment into a single measure, which is carbon output. This allows us to ignore other forms of pollution and the uglier fact that no land without a human touch can be found anymore. Even more importantly, land that is truly undeveloped is getting rarer and rarer.

Environmentalists from a more sensible time would wave away global warming as a detail. They would point to the simple fact that humanity has an exponential growth curve. Everywhere we go, we take over all useful land and divide it up into little parcels. We fence those in, cut off the natural species, and then cover the rest with concrete.

The result is many dysfunctions at once converging on a larger dysfunction. Natural ecosystems are shattered, removing their replenishing function. There are fewer trees to transform CO2 into oxygen. Rainfall is not retained, but becomes runoff, depleting the soil and poisoning the water with too many nutrients. Finally, the concrete which covers the whole mess tends to reflect heat and water while preventing anything from growing where it is.

Overpopulation, land overuse and industrial construction are the missing elements that humanity is trying to hide behind global warming. Cutting carbon allows these bigger problems to continue, which may be why we want global warming so badly to be the culprit. Slashing carbon will crimp our lifestyles, but facing overpopulation requires we make some hard moral decisions that no one wants to face.

The most revealing part of this situation is that our environmental sins come from the same root as all our other sins. We are dominating by social factors, like how our ideas appear to the judging minds of others, or how popular our solutions are. Complex and difficult thoughts will never be as popular as a harmless scapegoat that allows people to avoid any real change. And so the circus bleats on.