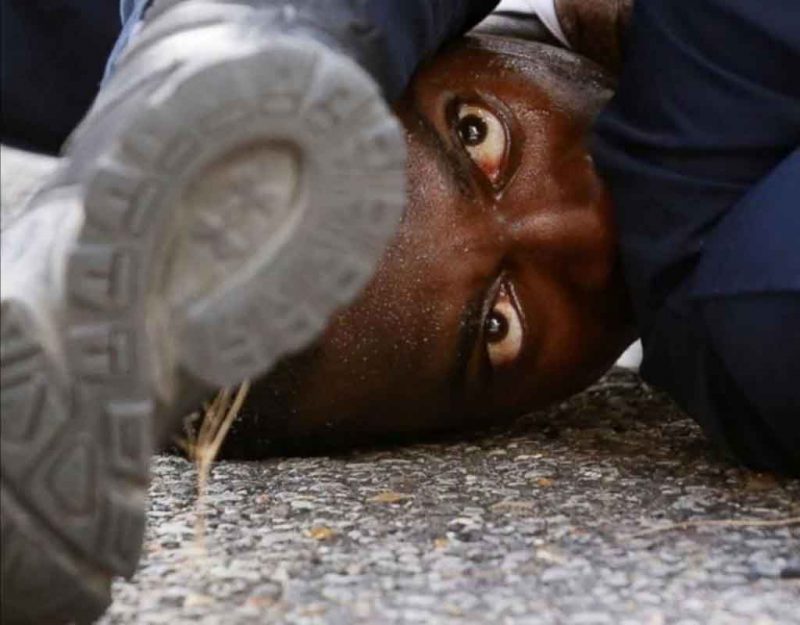 And so we find ourselves here again: a dead Black man, some white (and now Asian) cops, and riots in the streets. Like what happened with Eric Garner and Mike Brown, possibly Ahmaud Arbery, we are going to find more about the story in the future but the basics are already known.

That is, some non-Black people decided that a Black person was doing something wrong and went to stop him and get him into the system so he could have his fair day in court, but he resisted violently and ended up getting beaten, which ended in his death.

We are told that the problem is police brutality or white violence, but this does not ring true. After all, most Black people do not experience these things, although ones engaged in questionable material seem to have a much higher risk of doing so.

More likely we are facing a bigger problem: diversity itself.

When you are interacting with others from another group — race, religion, ethnicity, social class, sexual orientation, or elective tribe like Star Trek fans — you assume, instinctively, that they are acting in favor of their tribe over yours.

As the Iron Rule dictates, all things act only in their own self-interest alone. Every group acts toward its own self-interest because it would be insane to do otherwise. There are exceptions of course; if you know the person and trust them, this may temporarily over-ride tribalism.

In the bigger picture however, it never does. If you do not know the person, your first assumption is that they are cracking down on you because you are from an Other tribe. This is not an unfair assumption, and it means that suspicion will follow any arrest between races.

If white cops had held down a white guy who attacked them while being arrested, most would do the reasonable thing and wait for the inquest and fact-finding mission, then accept it unless there was contrary data.

Like the case of Rodney King, we would find ourselves viewing the video at full speed and realizing that when you take police on a hundred-mile-an-hour chase and then leap at them, they are going to pound you flat. They are afraid for their lives, and they probably should be.

In the cases of Mike Brown and Trayvon Martin, we found out that they were far from innocent, and in fact were engaged in criminal activity at the time. In other words, law enforcement was doing its job, but then was attacked.

Ahmaud Arbery will be found, at some future time when the threat of riots is over, to have been engaging in a pattern of behavior consistent with criminal activity. We already know he assaulted the men who came to make a Citizen’s Arrest. Soon we will find that they were right.

Does this mean that every Black man who is stopped is doing something illegal and should be beaten? Of course not. Nor does it mean that the cops were “judge, jury, and executioner” as certain legal illiterates argue: Arbery was being arrested so that he could have a fair trial.

However, when you assault the police, they have the same rights as anyone else to defend themselves. What are they supposed to do, die in your place like a Thomas Kinkade rendition of Jesus Christ? The point of law enforcement is to have arrest and then trial, but assault on arresting officers ends that.

Once we get past those trivial issues however we can see the real issue, which is that diversity is fundamentally unfair. Black men should not be getting pulled over by white cops, nor should white men be getting arrested by any Other race. Heck, white people do not even want Irish cops on the beat.

There is no way to make diversity work. As Osiris Akkebala opines:

You must reject America and rise up to be accountable to your self and together we will be with a soul that will guide you to your freedom away from an environment that has nothing but pain and suffering to offer to you, but together away from America with our Enslaved Ancestors Reparation/Repatriation in our possession and we back to where we were taken away from, then the power of the soul will become the verification of your freedom.

Only with ethnic self-determination is life fair. Only when “nation” means one ethnic group per country will we have something resembling fairness. Only when the arresting officers and the suspect are from the same tribe will there be an end to this paranoia and vindictiveness.

However, we do not see the solution as punishing whites any time the arrest of a Black man goes wrong, especially if it looks like he died of underlying medical issues and was engaged in dubious behavior like assault when the arrest went down.

As with many things, diversity in the twenty-first century is being revealed. We are seeing past the fog of symbols and emotions and recognizing that, as a policy, it makes no sense. We put up with it because it seemed to be the status quo, when in reality it is simply another insane choice made by democracy.

America and Europe have reached a state of diversity exhaustion. No matter what we do, problems remain; those continually sabotage us any time we want to reach for the stars or improve our society. Someone is always suffering and victimized and then everything must stop for the riots.

Even more, we see no benefits to diversity. We were promised a mix of vibrant cultures. That turns out to mean giving up our own, and accepting a non-culture of permissiveness which means no standards and no way to live normally. We killed our culture with multiculture.

Then the question of fairness arrives. Most of us want to live with those like us, not just by race but by ethnicity and religion, and we are told that this is bad and we should feel bad. We are tired of feeling bad; we want to do great things and have great lives, not weep over those who are struggling.

Despite throwing many careers, lives, fortunes, and vast sums of energy into trying to make diversity work, we see again that it has failed, and that no matter what we do, there will be riots and a sabotaging of anything good until the victim-class feels better.

This means that most of us out here in the Silent Majority have no more patience for diversity. It has showed us what it is, and that it is useless and destructive, so we want to stop supporting it and let it die naturally.

We are tired of having the guilt ray of death shined on us each time someone Black somewhere gets clobbered by someone white. We are tired of being unable to bust the Arberys and Martins of the world when they are breaking the law or endangering us.

Most of all, we are tired of a society that could point itself to the stars, but instead is heading straight for the mud with its pathological obsession with victimhood, class warfare, and inequality. We have sacrificed everything good to fling ourselves into the abyss of the bad.

Fred Nietzsche warned us against looking too deeply into the abyss, but we do nothing but. Our concern for the poor and minorities has taken over our ambition to do anything else, and like a lifeguard who does not secure a drowning person, the thrashing and panic is dragging us to the depths.

For us to survive, we need to escape illusions like equality and diversity. We need to stop rewarding the bad and weak in an attempt to subsidize them into health, and start rewarding the good and aiming high again. Yet each time we do this, someone else dies and the riots begin again.

We will have no end of arrests, deaths, and riots until we abolish diversity once and for all time.

Amerikan Decameron – Story IX: The Tragic Downfall of White Tupac Shapur | Why Generation X Was The Slacker And Dropout Generation