Geologic dimensionalism and the origin of evolution

Geology is an interesting subject, it studies the macrocosm of Earth and how its dimensions are the very support that allows biology to exist.

In this sense planetary geologists observe higher dimensions to that of biology, of which biology is almost entirely dependent. We call the interaction of geology and biology an ecology.

Life as we know it wouldn’t be as complex without these dimensions which provide a supportive framework, something that can be called a support niche.

As the Earth is just one planet, it itself is a successful niche in amongst billions of others across the universe. Perhaps some more or less supportive of complexity – the Sun also being a support niche to the Earth, the Milky Way supporting the Sun, and so on.

Now this is a hierarchal framework, we humans can take this and apply to everything we do. It is essentially philosophical and is our meta-geology, meta-science, meta-physics of the living world.

Geology helps our understanding of reality through the interaction of grouped materials similar enough in qualities to generate distinctive entities, different dimensions. A geologic dimension being a part of a cosmic whole, seperate and occupying another form within space to that of another – together they create an interactive support framework, a structure that defines reality.

In ancient western thought, these elementals were called simply Air, Water, Earth and Fire, these are symbolic of what is being described by geologic dimensionalism. This can also be taken further to include space, as this also is a dimension of its own, it is a spacious, immaterium that provides the support framework for the four main groups which constitute our plane.

How these dimensions battle for dominance is essentially generative of evolution. We can think of the Earth’s natural history and group the four dimensions into two parental ones; the heavy elements and the light elements, solid/ magma and gas. One is tugged toward the core the other is toward space, one heavy enough to fall firm toward material, one light enough to reach into the immaterial. 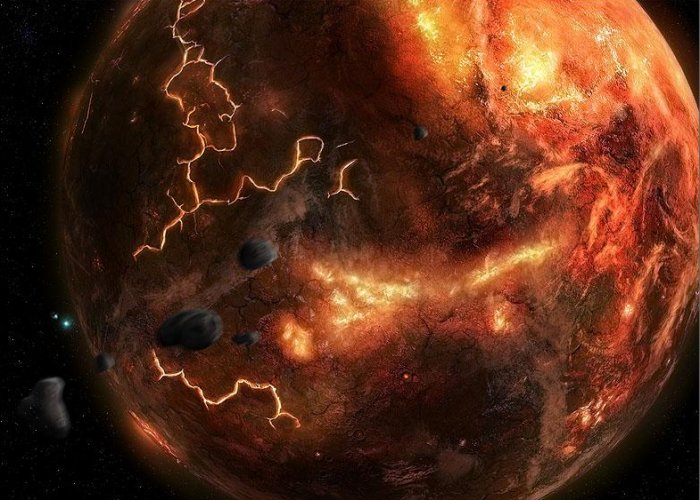 Here the Earth’s surface is molten rock and there is no ocean, it is still growing in mass and hasn’t the support for it.

The gradual out-gassing of lighter elements from comet and asteroid debris, along with the oozing up of gases from the centre of the Earth (through radioactive elements decaying in the core) generates a dense atmosphere about the world.

This is geologic dimensionalism, it is between the interaction of these dimensions that a localised branch of evolution is created. The oceans and the atmosphere evolved from the land and core and other contributions from space which gave the Earth its mass.

Once it had enough mass, the atmosphere could be sustained due to the increased gravitational enthalpy, after which, liquid accumulated in the skies until such a time where the molten surface of the Earth cooled enough to allow a thousand year rain that drowned the lowliest trenches of its creation into an entirely new dimension able to expand the support niche on this world.

As the oceans slowly raised themselves, the molten rock on the surface cooled and solidified into the crust, this is the bedrock of our known biosphere, and upon it now rests an atmosphere of increased pressure and relatively equalised temperature to preserve Earth from extreme temperature fluctuations.

With this stable climate, liquid water is able to exist between the two dimensions of land and atmosphere, therefore these two have essentially created a support framework for another dimension within this duality.

Now the combined efforts of land and atmosphere shift and mould the oceans, the atmosphere absorbs the evaporated moisture and transports this onto the farthest reaches of the land, it brings the two dimensions into interaction, between them gullies and lakes mix up basic elements into sophisticated molecular complexes, which further increased the support niche of the biosphere.

Further still, due to the proximity of a Moon, much closer to Earth here than is today, an enormous molten space rock taking up a chunk of the sky as it orbits close to the Earth, ripping the tides into tsunamis across the edges of the land. How the tides whipped up the ocean into a conquest of volcanically savaged terrain, throwing up all kinds of atomic prerequisites for organic compounds to generate. 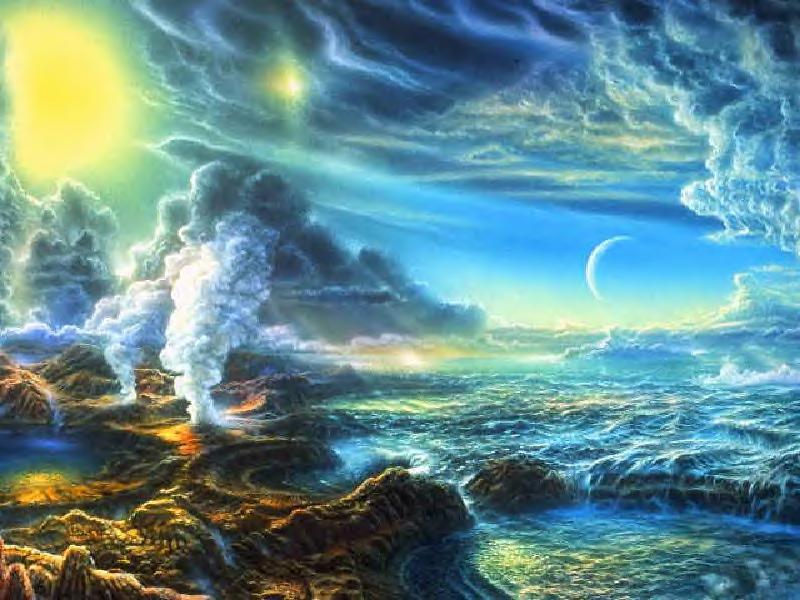 This chaos is bringing all four dimensions of land, ocean, atmosphere and core into a fierce onslaught – between them all lies the creation of biological life. Complexity is the by-product of this interaction.

Bubbles are a simple life form in this sense, a complexity arising between gas and liquid, now with other elements in the mix, it becomes a mixture of organic molecules (amino acids) in amongst the interaction of the atmosphere, oceans and nutrients in them from the land.

With a bolt of plasma from the lightning, catalyses organic molecules, creating them into chain complexes like ribonucleic acid. These propagate like a virus and widens the support niche; from this the they fuse into deoxyribonucleic acid, DNA also popularised as Life.

Each time the complexity of the interaction (between dimensions) is significantly leaped, it creates and conquests a higher support niche, like a singularity, an intersection where all lines cross, even if momentarily; that creates further niches for complexity to emerge and propagate with relatively little competition.

Each succession overruns a boundary of existence, it takes from the dimension of unexistence and brings this subjectively into the objective world; like foam raising the volume and complexity of space, breaking the symmetry.

In doing so it increases the support niche, or provides the dimension to which a future interaction will emerge fresh complexities in amongst the others.

Now make some use of this, change the prefix of dimensionalism toward; Political, Cultural, Social, Economic, Caste to name a few examples, and find their sub groups whilst trying to intuit how each interacts with others to create a support niche that sustains and evolves complexity.

Modern culture is dreck | If one person is offended, we edit history