Frailty, what is thy name?

In a dream, it was this morningÂ revealed to me at long last what women are really like. So as soon as I rinsed me from my slumber, I decided to come to this website to writeÂ down the most valuable findings of my revelation. 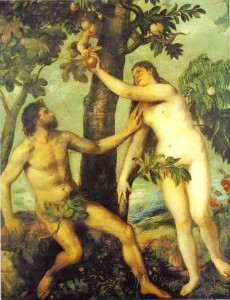 I dreamed that I was visiting some young, soft and appealing woman. We sat down at her kitchen and she poured us some lemonade. I was apparently very familiar with her. As she held her cup to her chest I was informed by her that she wasn’t at a suitable moment in her life to be in a serious relationship. Because she said she wasn’t ready to deal with all the complications that would bring.

She did stress, however, that she was open to a casual romance, or non-committing encounters with handsome young men. When I took hold of her body to caress and cuddle her, she at first seemed to enjoy it. Considering both of our ages â€“ the age to fall in love, to lie in the grass and hug as the midsummer sun sets behindÂ blossoming trees, it felt only as the most suiting and natural thing to do, although outside of my dream I would normally be much more reserved in making such a move.

As I embracedÂ this youngÂ womanÂ the warmth of her tender flesh radiated pleasingly through the fabric of our clothes. Then she suddenly changed her mind and said she wasn’t ready for it. At that instant it hit me.

“You women want everything!â€ I yelled. â€œYou want AND the freedom AND the romance AND the sex. You want deep erotic passion and emotional endearment, and at the same time you want no strings attached. You want to feel loved and understood, but you also want to go shopping when it enters your mind, call your friends at will to have long chit-chat conversations and go clubbing, or sleep until noon when it pleases you. And a man in a life would put restrictions on all of that. You want both the naughty boy AND the cultivated intellectualÂ who offers a listening ear as well as a refined sense ofÂ culture andÂ quality wine. And that combined with the untamed caveman-bodybuilder brute hankering for female flesh. You want AND to abandon yourself to reckless sweeping love AND to keep your distance. You want AND the knight in shining armor on his white horse AND the caring, understanding best friend. You want AND to be made to submit to his ardent amorous conquest AND you want to keep things in your control to do them at your own pace. You women want it all at the same time and yet nothing at all!” At that moment, when I had peered through the female facade and sharply revealed the secret, the girl stood bewildered and started to fade. I woke up.

Perhaps this problem of the woman has always been there, and is it not just a result of today’s age, where everything, including relationships, is seen as a product that needs to be satisfying yet fleeting. At the age the woman is most sexually attractive, that is from her puberty to her adolescence, she also tends to randomlyÂ enter into destructive emotional outbursts, to attract people only to then violently push them away, and to display conceited and self-overestimating behavior.

In primitive societies however, where everyone needed to cooperate if the harvests were to be readied in time, this behavior was quickly smothered; the adolescent girl had to work to earn her keep so her elders were quick to direct her towards the milking cow. And if she persisted in her unreliable moods they had her locked up in her room.

A man is differentÂ in this than a woman: he will settle for a reliable partner with a fresh face or that he can otherwise have a laugh with. He has tangible, definite goals that he solidifies by working towards them step by step. The woman counts on the man to do this for her â€“ a part of her counts on him to give direction to her life. She will unconsciously resent him if he doesnâ€™t, but she will also resent him if he doesnâ€™t respect her capricious choices as autonomous wishes.

Therefore he will never do it right, and always suffer the fallout. She wants to able to count on their man to sustain her and provide for her wishes, yet she wants to be independent and self-supplying. In this sense, her psychological instability and the corresponding moodswings can be accounted for by the fact that the urges of our primal tribal genes conflict with the needs of an emancipated society. In hunter gatherer societies, an age where the human being as a species spent 99,9% of his time developing as opposed to the industrial society where he spent only 00,1% of his existence, women often relied on men to find food for them as hunters. Especially in the ice-age, where the perpetual frost made fruits hard to come by.

Human beings share genes with primates, and in societies of primates the females always seek to hook up with the men at the top of the ladder; the female uses her sexuality to rise along with her man on the social ladder and lets him â€˜do the workâ€™, so to say. If her mate is overthrown by a newcomer she will also try to replace him. In comparison to human societies we see that a woman pushes her demands until the extreme and insists that it must all be perfect â€“ â€œeverything must feel rightâ€. With other words, she is unable to form a realistic self-image and tends to overrate her value on what Brett Stevens calls â€˜the sexual marketâ€™.

Our ancestors in their tribal and agricultural traditions understood this, and they knew that it would lead to sexual frustration and social instability. Therefore they always made it pretty clear whom was to marry with whom and when. Difference of religion and class as well as distance played a role in narrowing down the amount of possible partners. But today egalitarianism has dismantled these differences and with the increased mobility brought by the car and the internet the distance became also less of a restraining factor. This further accelerated the expectations and dreams of women which have now become extreme demands. Whereas women who have no standards at all frequently engage in casual sex while forgetting anticonception, and in this way out-procreate the rest.

Today however, in a society where the means to satisfy individual wishes are so readily available, temporary as these wishes may be, the flimsiness of the female psyche is no longer held in check. The broad emphasis on individual sovereignty has removed all boundaries that the juvenile girl needs to develop into a dutiful woman. In this way, contemporary society has unleashed the unrestrained whimsicalness of the woman upon the world. And because a pretty and youthful female body will hardly encounter a man not ready and eager to do her bidding and win her sympathy, her tenuous wishes are accelerated and magnified, not reduced to sensible proportions. God help us all.

(Oh, and ladies, by the way, this all comes from a guy who passed with ++ scores on the university courses genderstudies and emancipation-history.)

We are not one | Happiness