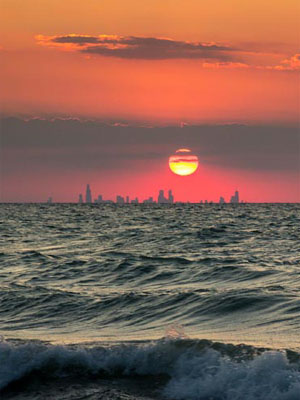 The flip turn is a technique used by swimmers where they somersault in the water to turn away from the wall as they swim laps. It is faster than the conventional method of turning, touching, pivoting and launching off in a new direction.

Conservatives are at a point where a turnabout is not only necessary, but puts us back in our correct role as those who improve the way of life of people in our society. That is what we do; we pay attention to consequences, and uphold those that create the timeless and permanent things in life, like truth, beauty and goodness.

Our society has ventured so far into the plastic, disposable, relativistic and pluralistic that it no longer has any standards or memory. People do what is convenient for them, and only later (slowly) realize that this means that they lack support from society at large. There is no context or nurturing growth medium for them.

When all you have is a job and an apartment, this outlook is fine. But as life goes on, and you want a stable place to raise kids, their future to be guaranteed by lack of political and social instability, and even the ability to meet like-minded people and live in places that are not mostly rotted, suddenly context matters.

The unfortunate part of this is that it requires many years of experience. The good part is that once you see it, it’s impossible to return to a state of its denial without in effect corrupting your own soul. This is why it is feared: it is a confrontation with the essence of life itself, much like maturation, death, combat and other big decisions.

Liberals fear this decision. They fear maturation. They fear anything other than the individual and what it wants, desires, emotes or judges right now. If kings were the thing liberals feared most, we should fear liberals, as they make each individual as abusive as a bad king by disconnecting them from context.

Context is what we rely on to thrive. When civilization has not yet formed, it is what people desire. When people take civilization for granted, they discard context and withdraw into themselves. Out of this anti-social impulse they form a social movement based on the idea that no individual should be compelled to do anything he/she doesn’t want to do.

At first, there are exceptions based on the logical need to collaborate. Over time, these too are mostly erased, leaving only those things that contravene the principle of individualism, such as rape, robbery or murder. Everything else is OK, and soon you have not one society but as many societies as you have individuals.

With this loss of context, life becomes chaotic and uncertain. People cling to power, and to control, as a vain hope of staving it off. They will even resort to appeasement, chucking bales of cash out of hovering helicopters in the form of entitlements. These delay, but do not stop, the decline.

As conservatives, we know the only resurrection is through a restoration of context. However, that cannot happen until it is well and truly dead, and so civilization needs to be re-formed from within. Unfortunately, by that point most people are either (a) addicted to denial that civilization is failing or (b) have given up hope.

Don’t give up hope. Here’s why: two things will happen at once, like tectonic plates moving in opposite directions. First, a society-within-a-society will arise which is dedicated to civilization. Second, and simultaneously, liberal policies will turn out badly for both individuals and society at large.

In fact, now is the best time to restore hope. We are finally seeing how liberalism fails. People are turning toward our side, if we don’t push them away. It’s time to re-take politics from the professionals, who failed to avert this crisis, and re-organize the political machine to get what we want.

What do we want? I propose this; see if you agree. I want Mayberry: a traditional society of towns and small cities, unified by a values system and a heritage, in which people are advanced by being competent and morally good, not by popularity and/or hoop-jumping certifications and/or political allegiance.

Maybe you want something similar. A society based on positive values, not the negative habit of looking for victims to use as its next great crusade. A society that rejects the French Revolution and its notion of radical, pathological questing for “equality.” A society devoted to normal lives and improving ourselves, not celebrating ourselves.

Liberal societies all face the same doom that the French Revolution did. Unstable, they murder their best citizens and install tyrants. Incompetent, they collapse from within. They return as crass marketplaces. Eventually there is money; at that point, their citizens become fully neurotic and most importantly, sabotage their children by treating them like toys or bragging rights.

The result is successive generations of neurotic people in a state of misery. On the social level, this creates incompetent politics, corruption and a breakdown of infrastructure as there are no clear-minded people left. The next stop is the third world levels of hygiene, corruption, disorder and lawlessness that characterize dying societies.

At this point, the only question for our fellow citizens is what kind of society they want. They won’t figure this out at first, since they’re befuddled by television and shopping. But we can win the smarter among them over to us, by showing them the choice they have, and the others will follow as they always do.

Which direction leads to our future?

“The internet is a brain disease” video | Long time coming