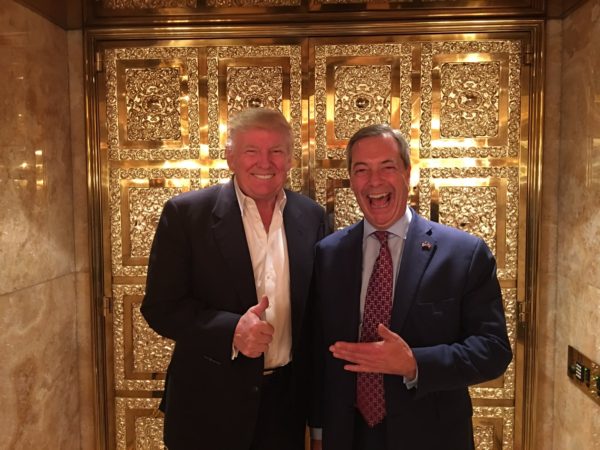 Following the ideas of libertarians and their extreme wing in Neoreaction, Donald J. Trump views American government as a corporation. In his mind, all of us are shareholders and customers, and his goal is to increase value for us by maximizing the quality and efficiency of American government.

As in a business, this involves cutting out any non-essential functions and replacing certain others with outsourced services as a means of thinning down the government. This not only saves money directly, but in the long term by reducing the layers of command and making it easier for people to accomplish tasks at the level of detail, which in turn makes it easier to move quickly and decisively.

The American government faces an unstable future. With $20 trillion in debt, and no change in spending, the cycle of taxing more and being more in debt will continue. This has long-term consequences since a currency backed by debt is not as valuable as one backed by industry or other actual value.

Cutting the budget is an American pastime at this point, which tells us that it has never effectively done, mainly because of the over half of the budget that goes to social spending. This social spending may in fact be more than conventionally believed:

Jacob Funk Kirkegaard, a senior fellow at the non-partisan Peterson Institute for International Economics, argues in a new report that once you take these kinds of tax breaks into account, the U.S. actually devotes far more resources than many other countries to â€œsocial spendingâ€ — spending on pensions, health care, family support, unemployment, housing assistance, and similar benefits meant to help people out in hard times. And, compared with most advanced countries, the U.S. gets far less bang for its buck in terms of health outcomes and equality.

…The U.S. offers huge amounts of what Kirkegaard calls â€œtax breaks for social purposes,â€ including the Earned Income Tax Credit, tax-exempt pension contributions, and new tax breaks for Americans to buy health insurance. In contrast, many European governments give services or cash benefits directly to their citizens, but then take some of that money back by taxing those cash benefits, or the personâ€™s spending more generally.

…Once you add in that private social spending and the effect of taxes, it changes the ranking entirely. Now the U.S. devotes more to social spending than Sweden, the U.K., Germany, and Denmark â€“ actually, every other advanced country except France.

When we add up all of the programs supported by our government, entitlements approach greater than 60% of our budget, with 24% to Social Security, 25 percent to health programs, 10% to safety next programs and a few percentage points to other programs designed as entitlements or other benefits to citizens directly. 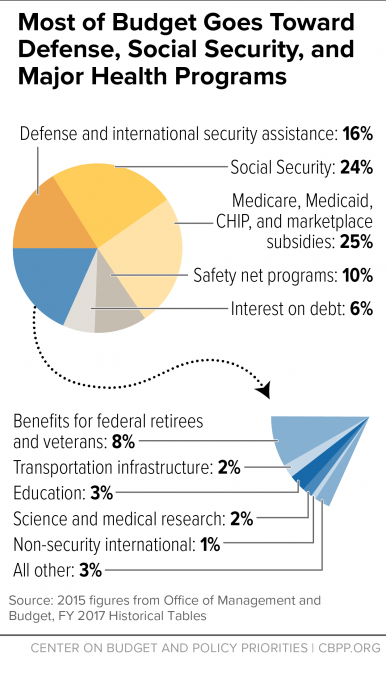 Although we only spend 6% of our budget on the mounting federal debt, we also have no way to pay it down, and the rise in spending on entitlements seems to correlate with inflation. In other words, the more we spend, the less our money is worth.

In addition, the more we are in debt, the less stable we are as an investment, which makes companies and other countries value our currency lower than it could be. The ease of acquiring government money, analogous to printing free money for people, drives down the value of any given dollar, so we can purchase less for our hard-earned cash. Consider that four decades ago, thirty-nine cents bought a hamburger.

This leaves the US with two grim choices, which Trump is brave enough to take on where no other American politicians will:

Our present path leads to the first option. At some point, we will simply have borrowed too much. The experts will tell us that since our debt service is still under 10% of the budget, we are doing fine, but the real effects will be secondary. Our currency will lose value, we will lose prestige, and our government will be manipulated by foreign debtors.

At some point, that game — the tax-and-spend fantasy that government and voters have arm-in-arm indulged for the past eight decades — will come to an end. We will no longer have a top credit rating, and everything will become difficult, requiring government to at some point throw up its hands and recognize that it can never pay off $30 trillion in debt.

On the other hand, the experts tell us that if we cut social programs, the voters will revolt and overthrow the nation. Given that they have not done that for any of the previous outrages, this is unlikely. More likely is that they will be feeling the pains of our illness, as they did during the Obama years, and will recognize that revolt will not happen except among destitute teenage anarchists.

Congress will not hear of this. The Establishment Republicans make their money by putting on a show, a big charade, in which they claim to be tough on Democrats, big on defense, pro-Israel and good Christians, and in favor of your right to work hard, pray hard, be patriotic and swill watery beer after another mind-numbing eight hours of your unimportant job. Republicans ruin the good name of conservatism.

The Left, at least, are honest about their motivations. They want to enforce equality, which always requires taking from the thriving and giving to the underdog, which in turn makes government necessary as the sap who writes the check. Their goal is not totalitarianism, but total freedom, with subsidies of course. The more anarchic society is, the more they profit!

Because Congress, especially a Republican Congress, will not let go of its franchise that allows it to raid government money in exchange for defending business, Trump will be forced into a showdown. He let the Republicans think they won on Obamacare, but they are already nervous about the midterms coming up. He also let them show how empty their promises are by failing the repeal.

Taking an aggressive stance is the only way to win because if he does not force a shutdown, the Republican Congress will attempt to continue to fail and hope that Trump will take the blame. The media will back them up solidly. The Left will do so as well. This means that Trump will have to force a government shutdown unless a reasonable budget is adopted.

He can do this in the form of a bill that sets out a government spending plan to reduce the debt over the next decade, but this will also require cuts. At this point, his constituents are divided on social spending, but respond positively to more money in their pockets and cheaper health care, which he can engineer by removing restrictions. His budget bill could include that, as well.

Either way, it is likely that Trump will attack this problem head-on. Whether he passes a budget or not, he will be blamed while Republicans do nothing. However, a government shutdown will transfer more blame to Congress than the president, since they will be seen as obstructing the necessary task of balancing the budget and paying down the debt.

Trump holds as number of “trump” cards here. He can de-fund programs. He has substantial controls over the paying of money, and can order the Treasury to stop paying debtors, which will force a default. In other words, the Republicans will not win here. They will either get with the Trump program, or fall on their swords by forcing such an extreme reaction that their franchise goes up in flames anyway.

For those on the Alt Right, a transition to minimal American government — funding military and infrastructure alone, and leaving everything else to the states — would be an optimal scenario. With the fall of entitlements, diversity also will fall, and with that, the economic model of the circular Ponzi scheme will fail. At that point, the US will politically fragment as it already has socially.

From that, great things can come. We can strip back government further and have states ruled by aristocracy. We can patch the Constitution to transition to monarchy. Even more, we can start driving out the collection of grifters and sociopaths who have ruled us since they bewitched the voters with promises of free government money, as democracy always does.

While most people have not realized it yet, profound changes have happened. Democracy no longer has the good name it once did. People are critical of the endless bureaucracy and ineptitude of our leaders and how they have transformed America and Europe through diversity. The Trump budget fight may kick off more of a conflict than the RINOs and cuckservatives could ever imagine.

Platform Denial and the Spirit of Free Speech | Peter Hitchens: Electorate are Equally to Blame for Britain’s Mess