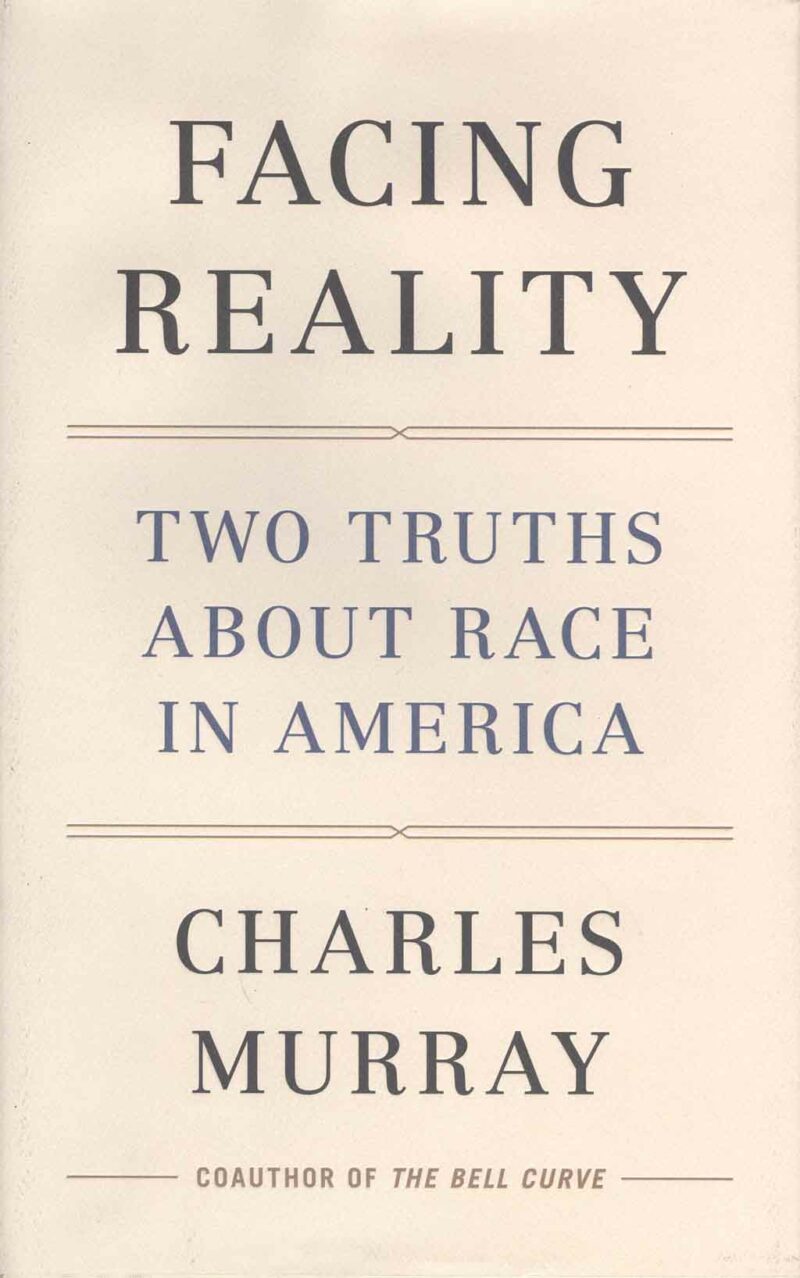 Having spent years brainwashed by oversocialization into a symbolic world of altruism and egalitarianism used to accumulate popularity, humanity slowly re-awakes to reality, including genetics and biology, which provides the basis of this fine introduction to the end of White Guilt.

Much as he did in The Bell Curve, Charles Murray takes Darwin seriously and consequently looks to genetics, specifically IQ, for ways to explain racial problems in America outside of the illogical religion of egalitarianism which assumes that people from different backgrounds are identical under the skin.

The problem of race and crime requires us to accept two truths at the same time:

In any random encounter between two individuals of different races, whatever those races may be, the chance of any sort of violence is so small that any race differences in the possibilities of violence can be ignored.

The differences in the group rates of violence are real and large, and it is human nature, not racism, to take precautions accordingly. (104)

Here we see the libertarian side of Charles Murray: he wants to talk about individuals as little islands of their own creation in a blank slate context, but also wants to remind us that third world poverty and crime are a result of lower average IQ and a higher propensity for impulsive violence and opportunism.

This book exists to gently introduce the latter to people who, raised on WW2-era equality propaganda, believe that there are no differences between groups and “White racism” and colonialism are responsible for third world poverty, crime, corruption, and incompetence.

A more mature view would add another layer which is that no matter what the different groups, diversity only creates fractures that take decades and centuries if not millennia to manifest, and always weakens the host society to the point of self-destruction.

Do we need to mention the former Yugoslavia, North Ireland, and even the split between North and South Germany here? Or the influence that Southern, Irish, and Eastern Europeans had upon America? Even among those of the same racial background but different ethnic backgrounds, like in Rwanda, Tigray, and Chiapas, diversity is a death sentence.

This requires him to tread carefully so that he can get to his main thesis, which is that racial differences among white social classes are responsible for differences in average wealth, which in turn shows us that the thesis of the French Revolution and liberalism itself are broken and illogical.

After all, the West “liberalized” — relaxed rules, standards, mores, morals, and social hierarchy — so that individualism could triumph, relying on the belief that all individuals were equal. Now we see that there are vast competence differences between social classes, races, and ethnic groups, and equality just takes the average of those and ends up at a mediocre level like that of the third world.

African Americans are subject to outcome bias not only with respect to tests but along many dimensions of American life. They have the short end of nearly every stick: average income, representation in high-level occupations, health and health care, death rate, confrontations with the legal system, and so on. With this situation in mind, some critics regard the test score differential as just another example of a pervasive outcome bias that characterizes our society as a whole. Although there is a sense in which they are right, this critique ignores the particular social purpose that tests are designed to serve. (44)

As viewed in Facing Reality: Two Truths about Race in America, America has encountered a fork in the road. Either we blame different average outcomes by race on a mythical “system racism,” or we accept Darwin and the grim reality that, just like with social class, genetics underscores the reason for these differences.

Some will criticize this book for bending over backwards to be open-minded, fair, and generous toward the side of this fork against which it argues. A more sensible view is that this book, like The Blank Slate, aims to introduce people to the idea that nature triumphs over nurture and therefore, we must take nature more seriously, reversing the position we have had for two centuries.

As a result, this book inches forward between different points of this argument: first, the power of genetics in IQ testing; second, how crime statistics are most likely representative; finally, how average IQ differences explain crime statistics and lower social outcomes more completely than any other theory. This Christmas, buy a copy for every normie you know.

News (May 20, 2022) | Anatomy of the Uniparty: Neoliberalism versus Market Socialism