The Blank Slate: The Modern Denial of Human Nature by Steven Pinker 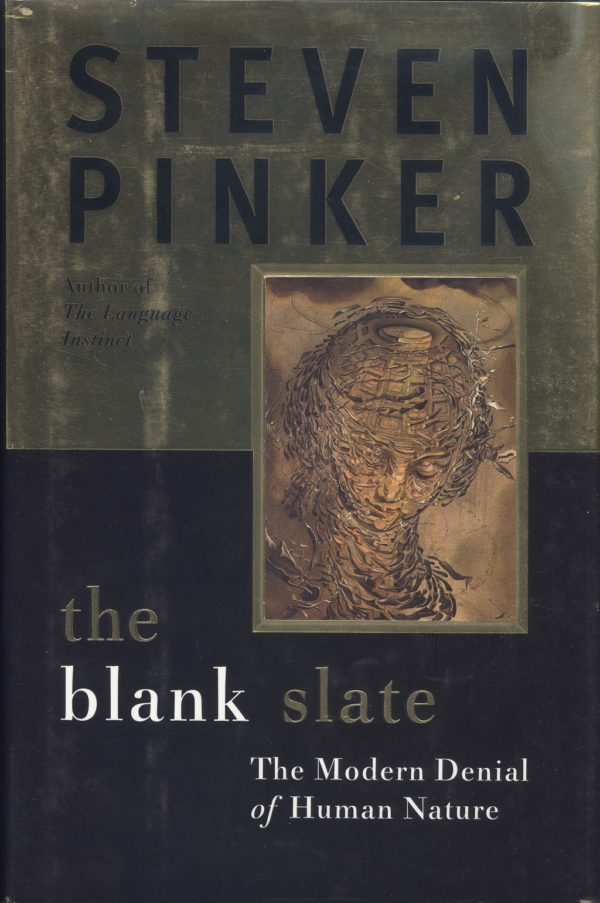 The Blank Slate: The Modern Denial of Human Nature
by Steven Pinker
509 pages, The Penguin Group, 2002

This book brilliantly debunks an illusion, and then resurrects it through its unsourced emphasis on individualism as a solution to the questions raised. Pinker identifies “The Blank Slate” as a modern ideology, but really, it is the modern ideology: individualism. For that reason, his backpedaling mars the latter half of this book.

The Blank Slate begins by pointing out how prevalent the illusion of equality is throughout academia. The utter intolerance and demonization of any other viewpoint than biological equality is revealed, and then Pinker describes his own struggles with ostracism and professional attacks for daring to believe otherwise than that God created us all identically, just with different skin tones, gender, features and origins.

The thesis of this book retains the simplicity of common sense truth: we are not all equal in ability, inclinations or outlook because we are different in genetics, and that explains our differences. Instead of assuming equality because it makes us feel good, Pinker argues, we should look toward actual diversity, which is that humans are massively different from each other, including by race, ethnic group and family.

He backs up this thesis with extensive data from twin studies, genetic assays and logical analyses which take complex concepts and boil them down to simple language which branches like computer code. For example, Pinker on environmental effects:

A given practice would have to affect some children one way, and other children another way, and the two effects would have to cancel out [for environmental effects to be explained as an interaction between parents and children]. For example, sparing the rod would have to spoil some children (making them more violent) and teach others that violence is not a solution (making them less violent). Displays of affection would have to make some children more affectionate (because they identify with their parents) and others less affectionate (because they react against their parents). The reason the effects have to go in opposite directions is that if a parenting practice had a consistent effect, on average, across all children, it would turn up as an effect of the shared environment. Adopted siblings would be similar, sibs growing up together would be more similar than sibs growing up apart — neither of which happens. (388)

Pinker writes convincingly of the basics of Human Biological Diversity (HBD) by attacking the idea that humans are uniform. Expanding on that, he shows instances where genetic history was so predictive of personality, abilities and preferences as to seem almost magic and uncanny. This provides a convincing counterpart to the begging-the-question fallacy of equality, which asserts itself as true and then attacks any who question the assumption.

Although the vast majority of the book consists of scientific data and its analysis, Pinker necessarily mixes in critical thinking and philosophy to defend what was — at the time — an unorthodox thesis. In fact, the ideas in this book remain highly controversial, but Pinker astutely focused on families and individuals more than heritage-based groupings, which escaped the raging animosity that other books on this topic have provoked.

Some people have suggested to me that these grandiloquent arguments are just too fancy for the dangerous world we live in. Granted, there is evidence that people are different, but since data in the social sciences are never perfect, and since a conclusion of inequality might be used to the worst ends by bigots or Social Darwinists, shouldn’t we err on the side of caution and stick with the null hypothesis that people are identical.

This book represents the cutting edge of a social and scientific revolution, popularized without adulterating its factual and analytical ferocity. In this pursuit, Pinker adopts a Nietzschean outlook which sees the methods of nature as not random, but intelligent, and through them, shows us why the “cruel” aspects of nature are gentler than our pretense of individual removal from Darwinistic struggle allow us to see.

That outlook makes The Blank Slate: The Modern Denial of Human Nature a rebellion against the pretense of our age which holds that nature was stupid and destructive, and our “enlightened” ways are far superior. It rejects the idea of egalitarianism indirectly by showing that its assumptions are false, and then looks deeper into the evidence to find a logic of nature that approximates the Nietzschean desire for supremacy, competence and elitism.

When the predictions were combined with some basic facts about the hunter-gatherer lifestyle in which humans evolved, parts of the psyche that were previously inscrutable turned out to have a rationale as legible as those for depth perception and the regulation of thirst. An eye for beauty, for example, locks onto faces that show signs of health and fertility — just as one would predict if it had evolved to help the beholder and find the fittest mate. The emotions of sympathy, gratitude, guilt and anger allow people to benefit from cooperation without being exploited by liars and cheats. A reputation for toughness and a thirst for revenge were the best defense against aggression in a world which one could not call 911 to summon the police. (53)

In this way, Pinker foreshadows Jonathan Haidt and his discovery that people are wired for three or more of six concerns, all of which relate directly to group survival that benefits the genes of the individual. This perspective shows us inequality as not just natural, but beneficial, and from that paves the way for another way of looking at human differences which exalts the benefits for the species and civilization in lieu of concern by the individual for the individual exercised through constraint of society to recognize inequality.

Parts of this book drift toward utopianism and this constitutes Pinker’s apology, perhaps, for having discovered and majestically explained the natural reasoning behind a great social taboo. He caps off his analysis with the sort of good-will-toward-all-men language that Nietzsche would have chuckled at, but he does this after he has thoroughly demolished illusions and asserted sanity. For this, he is a hero of the human reinvention of what it is to be human brought on by knowledge of our inherent differences.

Western Civilization Is Collapsing Like Roman Civilization Did | Copies Of Nihilism: A Philosophy Based In Nothingness And Eternity Are Arriving