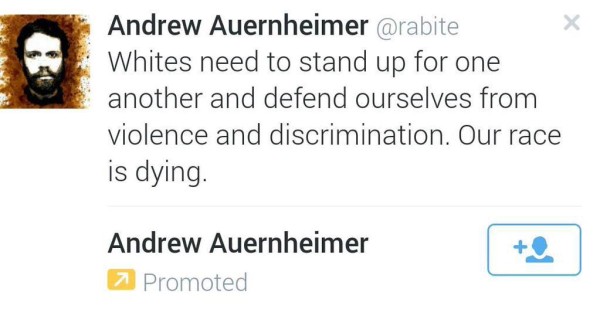 Ex-GNAA troll Andrew “Weev” Auernheimer, whose past stunts have included alleged hacks against Apple and AT&T, illustrated a wonderful loophole in modern society: it is a whore for money, and much of it is administered by thoughtless bots or bureaucrats who emulate them.

As detailed in his “tlog” (short for “troll log”) Weev used the automated advertisement-placing service to insert a number of, uh, controversial messages into the Twitter stream. Twitter even shows them to people who have blocked him because he is no longer little people like you and me, but an Advertiser whose interests are important.

This is the funniest dollar that I have ever spent in my life. Thanks @twitter @dickc, your ad console rules. https://t.co/wcFgmeaWyG

This shows perhaps why the left most fears the free market: it knows no obligation to force everyone to believe the same thing, which is required for reality-denying solipsistic ideologies like liberalism. Next stop, Times Square billboards.